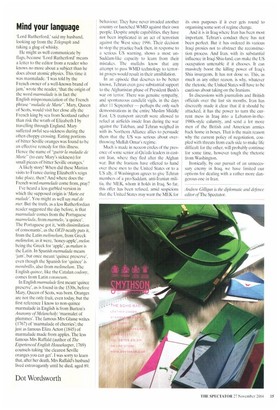 'Lord Rutherford,' said my husband, looking up from the Telegraph and taking a glug of whisky.

He might as well communicate by flags, because 'Lord Rutherfcgd' means a letter to the editor from a reader who knows no more about a subject than he does about atomic physics. This time it was marmalade. 'I was told by the French owner of a well-known brand of jam,' wrote the reader, 'that the origin of the word marmalade is in fact the English mispronunciation of the French phrase "maladie de Marie". Mary, Queen of Scots, would visit her close ally the French king by sea from Scotland rather than risk the wrath of Elizabeth I by travelling through England. Mary suffered awful sea-sickness during the often choppy crossing. Eating portions of bitter Seville oranges was found to be an effective remedy for this illness. I lence the name of "guerir la nuiladie de Marie" (to cure Mary's sickness) for small pieces of bitter Seville oranges.'

A likely story! When did these Marian visits to France during Elizabeth's reign take place, then? And where does the French word nuirmelade come from, pray?

I've heard a less garbled version in which the supposed origin is 'Marie e.st malade'. You might as well say ma/ dc rner. But the truth, as a less Rutherfordian reader suggested the day before, is that marmalade comes from the Portuguese mannelada, from marrnelo, 'a quince'. The Portuguese got it, 'with dissimilation of consonants', as the OED neatly puts it, from the Latin melimelum, from Greek melimelon, as it were, 'honey-apple', melon being the Greek for 'apple', as malum is the Latin. In Spanish mermalada means 'jam', but once meant 'quince preserve', even though the Spanish for 'quince' is membrillo, also from melimelum. The English quince, like the Catalan codony, comes from Latin cotoneum.

In English marmalade first meant 'quince preserve', as is found in the 1530s, before Mary, Queen of Scots, was born. Oranges are not the only fruit, even today, but the first reference I know to non-quince marmalade in English is from Burton's Anatomy of Melancholy: `marmalet of plummes'. The famous Mrs Glasse writes (1767) of 'marmalade of cherries'; the just as famous Eliza Acton (1845) of marmalade made from apples. The less famous Mrs Raffald (author of The Experienced English Housekeeper, 1769) counsels taking 'the clearest Seville oranges you can get'. I was sorry to learn that, after her death, Mrs Raffald's husband lived extravagantly until he died, aged 89.

behaviour. They have never invaded another country or launched WMD against their own people. Despite ample capabilities, they have not been implicated in an act of terrorism against the West since 1996. Their decision to stop the practice back then, in response to a serious US warning, shows a most unSaddam-like capacity to learn from their mistakes. The mullahs know that any attempt to pass W'MD technology to terrorist groups would result in their annihilation.

In an episode that deserves to he better known, Tehran even gave substantial support to the Afghanistan phase of President Bush's war on terror. There was genuine sympathy, and spontaneous candlelit vigils, in the days after 11 September — perhaps the only such demonstrations in the entire Muslim Middle East. US transport aircraft were allowed to refuel at airfields inside Iran during the war against the Taleban, and Tehran weighed in with its Northern Alliance allies to persuade them that the US was serious about overthrowing Mullah Omar's regime.

Much is made in neocon circles of the presence of some senior al-Oa'eda leaders in eastern Iran, where they fled after the Afghan war. But the Iranians have offered to hand over these men to the United States or to a US ally, if Washington agrees to give Tehran members of a pro-Saddam, anti-Iranian militia, the MEK. whom it holds in Iraq. So far, this offer has been refused, amid suspicions that the United States may want the MEK for its own purposes if it ever gets round to organising some sort of regime change.

And it is in Iraq where Iran has been most important. Tehran's conduct there has not been perfect. But it has ordered its various Iraqi proxies not to obstruct the reconstruction process. And Iran, with its substantial influence in Iraqi Shia-land, can make the US occupation untenable if it chooses. It can massively boost the killing power of Iraq's Shia insurgents. It has not done so. This, as much as any other reason, is why, whatever the rhetoric, the United States will have to be cautious about taking on the Iranians.

In discussions with journalists and British officials over the last six months. Iran has discreetly made it clear that if it should be attacked, it has the power to turn the current mess in Iraq into a Lebanon-in-the1980s-style calamity, and send a lot more men of the British and American armies back home in boxes. That is the main reason why the current policy of negotiation, coupled with threats from each side to make life difficult for the other, will probably continue for some time, however tough the rhetoric from Washington.

Ironically, by our pursuit of an unnecessary enemy in Iraq, we have limited our options for dealing with a rather more dangerous one in Iran.

Andrew Gilligan is the diplomatic and defence editor of The Spectator.