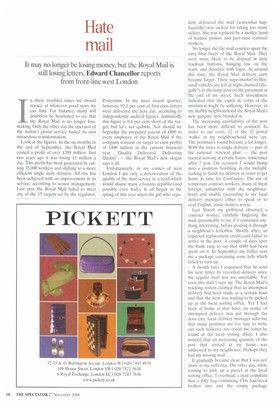 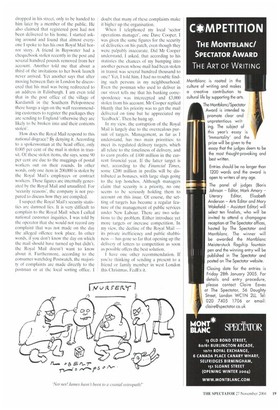 It may no longer be losing money, but the Royal Mail is still losing letters. Edward Chancellor reports from front-line west London In these troubled times we should rejoice at whatever good news we can find. For instance, many will doubtless be heartened to see that the Royal Mail is no longer lossmaking. Only the other day the operator of the nation's postal service hailed its own miraculous transformation.

Look at the figures. In the six months to the end of September, the Royal Mail coined a profit of over £200 million. Just two years ago it was losing £1 million a day. This profit has been generated by cutting 35,000 workers and shifting to a more efficient single daily delivery. All this has been achieved with an improvement in its service, according to senior management. Last year the Royal Mail failed to meet any of the 15 targets set by the regulator, Postcomm. In the most recent quarter, however. 92,1 per cent of first-class letters were delivered the next day, according to independently audited figures. Admittedly this figure is 0.4 per cent short of the target, hut let's not quibble. Nor should we begrudge the proposed payout of £800 to every employee of the Royal Mail if the company remains on target to earn profits of £400 million in the current financial year. 'Quality Delivered, Delivering Quality' — the Royal Mail's new slogan says it all.

Unfortunately, in my corner of west London I see only a deterioration of the quality of the mail service to a level which would shame many a banana republic (and possibly even Italy). It all began in the spring of this year when the girl who regu larly delivered the mail (somewhat haphazardly) was sacked for taking too many sickies. She was replaced by a motley band of trainee posties and part-time contract workers.

No longer did the mail couriers sport the navy blue livery of the Royal Mail. They were more likely to be dressed in dirty tracksuit bottoms, hanging low on the waist, and ‘hoodies' with logos. At around this time, the Royal Mail delivery carts became larger. These supermarket trolleysized vehicles are left at night chained (illegally?) to the lamp post on the pavement at the end of my street. Such slovenliness indicated that the esprit de corps of the institution might be suffering. However, in my shabby neighbourhood the Royal Mail's new `gangsta' style blended in.

The increasing unreliability of the post has been more difficult to stomach. In order to cut costs, 12 of the 32 postal 'walks' in my neighbourhood were cut. The postman's round became a lot longer. With the move to single delivery — part of the national 'renewal plan' — the post started arriving at erratic hours, sometimes after 7 p.m. On occasion I would bump into a postman fumbling in the twilight, rushing to finish his delivery in order to get home in time for EaslEnders. The use of temporary contract workers, many of them foreign, unfamiliar with the neighbourhood and unable (according to my local delivery manager) either to speak or to read English, made matters worse.

A month later I requested that he send his next letter by recorded delivery since the regular mail was too unreliable. Yet even this didn't turn up. The Royal Mail's dcking system claimed that an attempted ,felivery had been made at a certain hour and that the item was waiting to be picked up at the local sorting office. Yet I had been at home at that hour, no notice of attempted delivery was put through the door (my local delivery manager tells me that many postmen are too lazy to write out such notices), nor could the letter be found at the local sorting office. I also noticed that an increasing quantity of the post that arrived at my home was addressed to my neighbours. Perhaps they had my missing mail.

It gradually became clear that I was not alone in toy suffering. The other day, while waiting to pick up a parcel at the local sorting office, I overhead a man complain that a Jiffy bag containing CDs had been broken into and the empty package

dropped in his street, only to be handed to him later by a member of the public. He also claimed that registered post had not been delivered to his home. I started asking around and found that almost everyone I spoke to has his own Royal Mail horror story. A friend in Bayswater had a chequebook stolen recently in the post and several hundred pounds removed from her account Another told me that about a third of the invitations to her book launch never arrived. Yet another says that after moving between flats in London he discovered that his mail was being redirected to an address in Edinburgh. I am even told that in the post office of the village of Kardamili in the Southern Peloponnese there hangs a sign on the wall recommending customers to register the packages they are sending to England 'otherwise they are likely to be broken into and their contents stolen'.

How does the Royal Mail respond to this national disgrace? By denying it. According to a spokeswoman at the head office, only 0.005 per cent of the mail is stolen in transit. Of these stolen items, she says, some 90 per cent are due to the muggings of postal workers out on their rounds. In other words, only one item in 200,000 is stolen by the Royal Mail's employees or contract workers. These figures are internally generated by the Royal Mail and unaudited. For 'security reasons', the company is not prepared to discuss how they are compiled.

I suspect the Royal Mail's security statistics are damned lies. It is very difficult to complain to the Royal Mail: when I called national customer inquiries, I was told by the operator that she would not record any complaint that was not made on the day the alleged offence took place. In other words, if you don't know the day on which the mail should have turned up but didn't, the Royal Mail doesn't want to know about it. Furthermore, according to the consumer watchdog Postwatch, the majority of complaints arc made directly to the postman or at the local sorting office. I doubt that many of these complaints make it higher up the organisation.

When I telephoned my local 'sector operations manager', one Dave Cooper, I was given the same figures for the security of deliveries on his patch, even though they were palpably inaccurate. Did Mr Cooper understand, I asked, that according to his statistics the chances of my bumping into another person whose mail had been stolen in transit was several hundred thousand to one'? Yet, I told him, I had no trouble finding such persons in my neighbourhood. Even the postman who used to deliver in our street tells me that his banking correspondence was intercepted and £3,000 stolen from his account Mr Cooper replied bluntly that his priority was to get the mail delivered on time but he appreciated my 'feedback'. Then he hung up.

In my view, the corruption of the Royal Mail is largely due to the overzealous pursuit of targets. Management, as far as I understand, has two main priorities: to meet its regulated delivery targets, which all relate to the timeliness of delivery, and to earn profits of £400 million in the current financial year. If the latter target is met, according to the Financial Times, some £200 million in profits will be distributed as bonuses, with large slugs going to the top honchos. Although managers claim that security is a priority, no one seems to be seriously holding them to account on this issue. Of course, the setting of targets has become a regular feature of the management of public services under New Labour. There are two solutions to the problem. Either introduce yet more targets or increase competition. In my view, the decline of the Royal Mail — its private inefficiency and public shabbiness — has gone so far that opening up the delivery of letters to competition as soon as possible offers the best solution.

I have one other recommendation. If you're thinking of sending a present to a friend or family member in west London this Christmas, FedEx it.