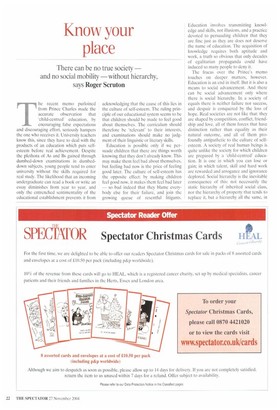 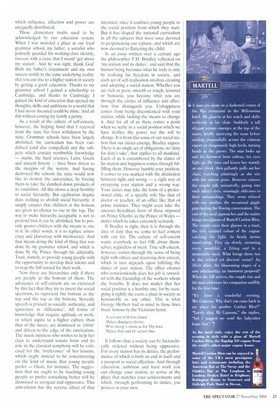 There can be no true society — and no social mobility — without hierarchy, says Roger Scruton

The recent memo purloined from Prince Charles made the

accurate observation that 'child-centred' education, by encouraging false expectations and discouraging effort, seriously hampers the one who receives it. University teachers know this, since they have to deal with the products of an education which puts selfesteem before real achievement. Despite the plethora of As and Bs gained through dumbed-down examinations in dumbeddown subjects, young people tend to enter university without the skills required for real study. The likelihood that an incoming undergraduate can read a book or write an essay diminishes from year to year, and only the entrenched sentimentality of the educational establishment prevents it from acknowledging that the cause of this lies in the culture of self-esteem. The ruling principle of our educational system seems to be that children should be made to feel good about themselves. The curriculum should therefore be 'relevant' to their interests, and examinations should make no judgment of their linguistic or literary skills.

Education is possible only if we persuade children that there are things worth knowing that they don't already know. This may make them feel bad about themselves, but feeling bad now is the price of feeling good later. The culture of self-esteem has the opposite effect: by making children feel good now, it makes them feel had later

so bad indeed that they blame everybody else for their failure, and join the growing queue of resentful litigants.

Education involves transmitting knowledge and skills, not illusions, and a practice devoted to persuading children that they are fine just as they are does not deserve the name of education. The acquisition of knowledge requires both aptitude and work, a truth so obvious that only decades of egalitarian propaganda could have induced so many people to deny it.

The fracas over the Prince's memo touches on deeper matters, however. Education is an end in itself. But it is also a means to social advancement. And there can be social advancement only where there is social hierarchy. In a society of equals there is neither failure nor success, and despair is conquered by the loss of hope. Real societies are not like that: they are shaped by competition, conflict, friendship and love, all of them forces that have distinction rather than equality as their natural outcome, and all of them profoundly antipathetic to the culture of selfesteem. A society of real human beings is quite unlike the society for which children are prepared by a 'child-centred' education. It is one in which you can lose or gain; in which talent, skill and hard work are rewarded and arrogance and ignorance deplored. Social hierarchy is the inevitable consequence of this: not necessarily the static hierarchy of inherited social class, nor the hierarchy of property that tends to replace it, but a hierarchy all the same, in

which influence, affection and power are unequally distributed.

Those elementaiy truths used to be acknowledged by our education system. When I was awarded a place at our local grammar school, my father, a socialist who jealously guarded his working-class identity, foresaw with a curse that I would 'get above my station'. And he was right, thank God. Both my father's resentment and my own success testify to the same underlying reality: that you can rise to a higher station in society by getting a good education. Thanks to my grammar school I gained a scholarship to Cambridge, and thanks to Cambridge I gained the kind of education that opened my thoughts, skills and ambitions to a world that I had never dreamed could he mine. And all this without costing my family a penny.

As a result of the culture of self-esteem, however, the helping hand that 1 received from the state has been withdrawn by the state. Grammar schools have been largely abolished, the curriculum has been vandalised (and also compelled) and the subjects which contain worthwhile knowledge — maths, the hard sciences, Latin, Greek

and ancient history have been driven to the margins of the system. And having destroyed the schools the state would now like to destroy the universities, by forcing them to take the dumbed-down products of its vandalism. All this shows a deep hostility to social hierarchy. But egalitarian dogma does nothing to abolish social hierarchy: it simply ensures that children at the bottom are given no chance to rise to the top. The way to make hierarchy acceptable is not to pretend that it can be abolished, but to provide poorer children with the means to rise in it. In other words, it is to replace aristocracy and plutocracy with meritocracy. And that means doing the kind of thing that was done by my grammar school, and which is done by the Prince through his admirable Trust, namely, to provide young people with the opportunity to develop their talents and to reap the full reward for their work.

Now there are hierarchies only if there are people at the bottom of them. The advocates of self-esteem are so exercised by this fact that they try to invert the social spectrum, to represent the bottom as the top and the top as the bottom. Slovenly speech is praised as socially authentic, and ignorance as 'difference'. All forms of knowledge that require aptitude or work, or which aspire to a higher culture than that of the street, are dismissed as 'elitist' and driven to the edge of the curriculum. The music mistress who wishes to help her class to understand sonata form and its role in the classical symphony will be criticised for the 'irrelevance' of her lessons, which ought instead to be concentrating on the kind of music that young people prefer — Oasis, for instance. The suggestion that we ought to be teaching young people to prefer something better will be dismissed as arrogant and oppressive. This anti-elitism has the reverse effect of that

intended, since it confines young people to the social position from which they start. But it has shaped the national curriculum in all the subjects that were once devoted to perpetuating our culture, and which are now devoted to flattering the child.

In an essay written over a century ago the philosopher F.H. Bradley reflected on 'my station and its duties', and said that the human being becomes what he truly is only by realising his freedom in society, and each act of self-realisation involves creating and adopting a social station. Whether you are rich or poor, smooth or rough, leisured or banausic, you become what you are through the circles of influence and affection that distinguish you. Unhappiness comes from being discontented with your station, while lacking the means to change it. And for all of us there comes a point when we settle in a social position which we have neither the power nor the will to change. It is from this sense of our social station that our duties emerge, Bradley argues. There is no single set of obligations, no 'duty for duty's sake', that applies to all mankind. Each of us is encumbered by the duties of his station and happiness comes through fulfilling them. liowever humble your position, it comes to you marked with the distinction between right and wrong — a right way of occupying your station and a wrong way. Your duties may take the form of a professional ethic, of a specific role like that of doctor or teacher, of an office like that of prime minister. They might even take the onerous hereditary form of those imposed on Prince Charles as the Prince of Wales — duties which he takes extremely seriously.

If Bradley is right, then it is through the idea of duty that we come to feel content with our lot. The culture of self-esteem wants everybody to feel OK about themselves, regardless of merit. True self-esteem, however, comes through the sense of being right with others and deserving their esteem, which in turn depends upon fulfilling the duties of your station. The office cleaner who conscientiously does her job is rewarded with the friendship of the workers whom she benefits. It does not matter that her social position is a humble one; for by occupying it rightly she earns a place in society as honourable as any other. This is what George Herbert had in mind in those lines made famous by the Victorian hymn:

A servant with this clause Makes drudgery divine:

Who sweep a room as for Thy laws

Makes that and th' action fine.

It follows that a society can be hierarchically ordered without being oppressive. For every station has its duties, the performance of which is both an end in itself and a passport to social affection, And through education, ambition and hard work you can change your station, to arrive at the place that matches your achievements and which, through performing its duties, you possess as your own.