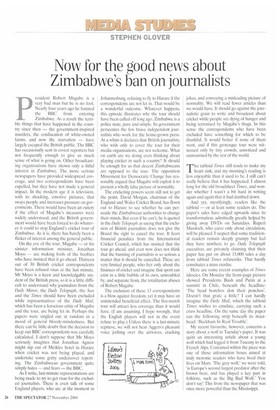 \ow for the good news about Zimbabwe's ban on journalists

president Robert Mugabe is a very had man but he is no fool. Nearly four years ago he banned the BBC from entering Zimbabwe. As a result the terrible things that have happened in the country since then — the government-inspired murders, the confiscation of white-owned farms, and now the starvation — have largely escaped the British public. The BBC has occasionally sent in covert reporters but not frequently enough to give us much sense of what is going on. Other broadcasting organisations have shown only a fitful interest in Zimbabwe. The more serious newspapers have provided widespread coverage, and two correspondents have been expelled, but they have not made a general impact. In the modern age it is television, with its shocking, emotive pictures, that sways people and increases pressure on governments. There would have been an outcry if the effect of Mugabe's measures were widely understood, and the British government would have been forced to do whatever it could to stop England's cricket tour of Zimbabwe. As it is, there has barely been a flicker of interest among the general public.

On the eve of the tour, Mugabe — or his sinister information minister, Jonathan Moyo are making fools of the boobies who have insisted that it go ahead. Thirteen out of 30 British cricket correspondents have been refused visas at the last minute. Mr Moyo is a keen and knowledgable student of the British press, so it is a little difficult to understand why journalists from the Daily Mirror, the Daily Telegraph, the Sun and the Times should have been excluded while representatives of the Daily Mail, which has been a ferocious critic of Mugabe and the tour, are being let in. Perhaps the papers were singled out at random in a mood of general bloody-mindedness. But there can be little doubt that the decision to keep out BBC correspondents was carefully calculated. I don't suppose that Mr Moyo seriously imagines that Jonathan Agnew might nip out of Meikles hotel in Harare when cricket was not being played, and undertake some gritty undercover reporting. The Zimbabwean government quite simply hates and fears — the BBC.

As I write, last-minute representations are being made to try to get visas for the excluded journalists. There is even talk of sonic England players, who are at the moment in Johannesburg, refusing to fly to Harare if the correspondents are not let in. That would be a wonderful outcome. Whatever happens, this episode illustrates why the tour should have been called off long ago. Zimbabwe is a police state, pure and simple. Its government persecutes the few brave independent journalists who work for the home-grown press. At a whim it declares that British journalists, who wish only to cover the tour for their media organisations, are not welcome. What on earth are we doing even thinking about playing cricket in such a country? It should be enough for us that decent Zimbabweans are opposed to the tour. The opposition Movement for Democratic Change has reasonably argued that Mugabe will exploit it to present a wholly false picture of normality.

The cricketing powers seem still not to get the point. David Morgan, chairman of the England and Wales Cricket Board, has flown out to Harare to see whether he can persuade the Zimbabwean authorities to change their minds. But even if he can't, he is quoted in the Daily Telegraph as saying that the exclusion of British journalists does not give the Board the right to cancel the tour. It fears financial penalties from the International Cricket Council, which has insisted that the tour go ahead, and even now does not think that the banning of journalists is so serious a matter that it should be cancelled. These are very limited people, who fret only about the finances of cricket and imagine that sport can exist in a little bubble of its own, untroubled by, and separate from, the totalitarian abuses of Robert Mugabe.

The exclusion of these 13 correspondents is a blow against freedom, yet it may have an unintended beneficial effect. The five-match tour will attract less coverage than it would have. (I am assuming, I hope wrongly, that the English players will not in the event refuse to play.) Unless there is a last-minute reprieve, we will not hear Aggers's pleasant voice joshing over the airwaves, cracking jokes, and conveying a misleading picture of normality. We will read fewer articles than we would have. It should go against the journalistic grain to write and broadcast about cricket while people are dying of hunger and being terrorised by Mugabe's thugs. In this sense the correspondents who have been excluded have something for which to be thankful. It would better if none of them went, and if this grotesque tour were witnessed only by tiny crowds, unnoticed and unmourned by the rest of the world.

rr he tabloid Times still tends to make my 1 heart sink, and my morning's reading is less enjoyable than it used to be. I still can't really believe that it has happened. I almost long for the old broadsheet Times, and wonder whether I wasn't a bit hard in writing again and again that it had dumbed down.

And yet, mystifyingly, readers like the tabloid — or at least some readers do. The paper's sales have edged upwards since its transformation, admittedly greatly helped by giving away DVDs on Saturdays. Rupert Murdoch, who cares only about circulation, will be pleased. I suspect that some traditional readers remain deeply grumpy but feel they have nowhere to go. Daily Telegraph executives are privately claiming that their paper has put on about 15,000 sales a day from tabloid Times refuseniks. That hardly constitutes a mass exodus.

Here are some recent examples of Times idiocies. On Monday the front-page picture showed Presidents Bush and Putin at a summit in Chile, beneath the headline: The head honchos don their ponchos'. Doesn't that grate a little? I can hardly imagine the Daily Mail, which the tabloid Times wishes to emulate, carrying such a crass headline. On the same day the paper ran the following strip beneath its masthead; 'Beckham In Real Trouble'.

My recent favourite, however, concerns a story about a wolf in Tuesday's paper. It was quite an interesting article about a young wolf which had legged it from Tuscany to the French Alps. Contained within the piece was one of those information boxes aimed at truly moronic readers who have lived their lives on Mars. The grey wolf,' we were told, is Europe's second largest predator after the brown bear, and has played a key part in folklore, such as the Big Bad Wolf.' You don't say! This from the newspaper that was once more powerful than the Mississippi.