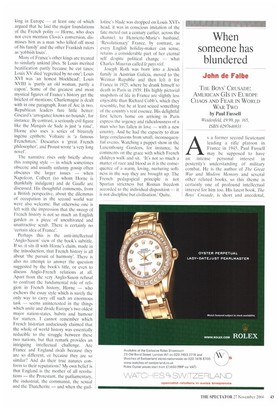 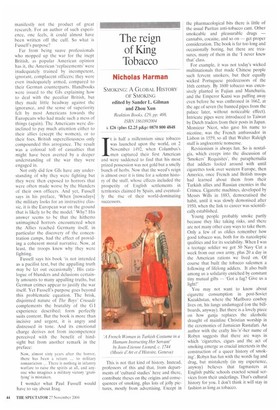 When someone has blundered

THE, BOYS' CRUSADE: AMERICAN GIs IN EUROPE CI IAOS AND FEAR IN WORLD WAR TWO by Paul Fussell Weidenfeld, £9.99, pp. 165, ISBN 0297646931 s a former second lieutenant leading a rifle platoon in France in 1945, Paul Fussell may be supposed to have an intense personal interest in posterity's understanding of military combat. He is the author of The Great War and Modern Memory and several other related books, so this theme is certainly one of profound intellectual interest for him too. His latest book, The Boys' Crusade, is short and anecdotal,

manifestly not the product of great research. For an author of such experience, one feels, it could almost have been written off the cuff. So what is Fussell's purpose?

Far from being suave professionals who mopped up the war for the inept British, as popular American opinion has it, the American 'replacements were inadequately trained by incompetent, ignorant, complacent officers; they were even inadequately armed, compared to their German counterparts. Handbooks were issued to the GIs explaining how to deal with the peculiar British, but they made little headway against the ignorance, and the sense of superiority felt by most Americans towards the Europeans who had made such a mess of things (again). The Americans were disinclined to pay much attention either to their allies (except the women), or to their foes. British superciliousness only compounded this arrogance. The result was a colossal toll of casualties that might have been averted by a deeper understanding of the war they were engaged in.

Not only did few GIs have any understanding of why they were fighting but they were then exposed to horrors that were often made worse by the blunders of their own officers. And yet, Fussell says in his preface, 'When [nowadays] the military looks for an instructive classic, it is the European war on the ground that is likely to be the model.' Why? His answer seems to be that the hitherto unimagined horrors encountered when the Allies reached Germany itself, in particular the discovery of the concentration camps, had the effect of providing a coherent moral narrative. Now, at least, the troops knew why they were fighting.

Fussell says his book 'is not intended as a pacifist text, but the appalling truth may be let out occasionally'. His catalogue of blunders and delusions certainly amounts to many appalling truths, but German crimes appear to justify the war itself. Yet Fussell's purpose goes beyond this problematic equation. The brisk. disjointed nature of The Boys' Crusade complements the brutality of the G I experience described; form perfectly suits content. But the book is more than incisive and urgent, it is angry and distressed in tone. And its emotional charge derives not from incompetence perceived with the benefit of hindsight but from another remark in the preface:

Now, almost sixty years after the horror, there has been a return to military romanticism ... There is nothing in infantry warfare to raise the spirits at all, and anyone who imagines a military victory 'gratifying' is mistaken.

I wonder what Paul Fussell would have to say about Iraq.