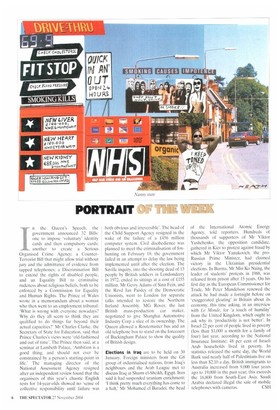 J, n the Queen's Speech, the government announced 32 Bills: one to impose 'voluntary' identity cards and then compulsory cards: another to create a Serious Organised Crime Agency; a CounterTerrorist Bill that might allow trial without jury and the admittance of evidence from tapped telephones; a Discrimination Bill to extend the rights of disabled people. and an Equality Bill to criminalise rudeness about religious beliefs, both to be enforced by a Commission for Equality and Human Rights. The Prince of Wales wrote in a memorandum about a woman who then went to an employment tribunal: 'What is wrong with everyone nowadays? Why do they all seem to think they are qualified to do things far beyond their actual capacities?' Mr Charles Clarke, the Secretary of State for Education, said that Prince Charles's views were 'old-fashioned and out of time'. The Prince then said, at a seminar at Lambeth Palace, 'Ambition is a good thing, and should not ever be constrained by a person's starting-point in life.' The managing director of the National Assessment Agency resigned after an independent review found that the organisers of this year's chaotic English tests for 14-year-olds showed no 'sense of collective responsibility until failure was both obvious and irreversible'. The head of the Child Support Agency resigned in the wake of the failure of a £456 million computer system. Civil disobedience was planned to meet the eriminalisation of foxhunting on February 18; the government failed in an attempt to delay the law being implemented until after the election. The Saville inquiry, into the shooting dead of 13 people by British soldiers in Londonderry in 1972, ended its sittings at a cost of £155 million. Mr Gerry Adams of Sinn Fein, and the Revd Ian Paisley of the Democratic Unionists, went to London for separate talks intended to restore the Northern Ireland Assembly. MG Rover, the last British mass-production car maker, negotiated to give Shanghai Automotive Industry Corp a slice of its ownership. The Queen allowed a Routemaster bus and an old telephone box to stand on the forecourt of Buckingham Palace to show the quality of British design.

Elections in Iraq are to be held on 30 January. Foreign ministers from the G8 group of industrialised nations, from Iraq's neighbours and the Arab League met to discuss Iraq at Sharm el-Sheikh, Egypt. Iran said it had suspended uranium enrichment; 'I think pretty much everything has come to a halt,' Mr Mohamed el Baradei, the head

of the International Atomic Energy Agency, told reporters. Hundreds of thousands of supporters of Mr Viktor Yushchenko, the opposition candidate, gathered in Kiev to protest against fraud by which Mr Viktor Yanukovich, the proRussian Prime Minister, had claimed victory in the Ukrainian presidential elections. In Burma, Mr Min Ko Naing, the leader of students' protests in 1988, was released from prison after 15 years. On his first day as the European Commissioner for Trade, Mr Peter Mandelson renewed the attack he had made a fortnight before on 'exaggerated gloating' in Britain about its economy, this time asking, in an interview with Le Monde, for 'a touch of humility' from the United Kingdom, which ought to ask why its 'productivity is not better'. In Israel 22 per cent of people lived in poverty (less than $1,000 a month for a family of four) last year, according to the National Insurance Institute; 48 per cent of Israeli Arab households lived in poverty. In statistics released the same day, the World Bank said nearly half of Palestinians live on less than $2.10 a day. British immigrants to Australia increased from 9.000 four years ago to 19,000 in the past year; this exceeds the 16,800 from South-East Asia. Saudi Arabia declared illegal the sale of mobile telephones with cameras. CSH