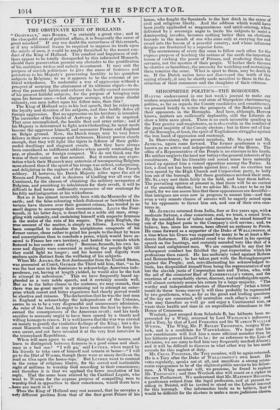 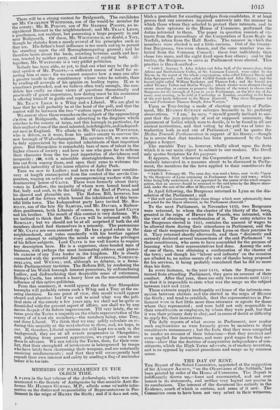 HAVING endeavoured in our last week's journal to make our readers acquainted with the real state of Shropshire electioneering politics, as far as regards the County candidates and constituency, we proceed briefly to notice the prospects of the Reformers and their opponents in the Boroughs. And here, although, Heaven knows, matters are sufficiently deplorable, still the Liberals do show a little more pluck. There is no such miserable quailing to the Tory gentry and magistrates, as is observable in the conduct of the great majority of the County electors ; but in three out of four of the Boroughs, at least, the spirit of Englishmen struggles against the iron hand of oppression and contempt.

In Shrewsbury, the present members, Mr. SLANEY and Mr. JE.)1xiNs, again come forward. The former gentleman is well known as an active and independent member of the House. The office of a Representative of the People is no sinecure in his hands. He neither neglects the local nor betrays the general interests of his constituents. But his liberality and sound sense have naturally raised up against him a violent opposition among the Tories. In fact, a dead set has been made against him; and no exertion has been spared by the High Church and Corporation party, to bully him out of the borough. But these gentlemen mistook their man, Mr. SLANEY met them fairly in the field, and beat them hollow. The prevailing opinion at present is, that there will be no contest at the ensuing election; but we advise Mr. SLANEY to be on his guard, for we can assure him that these appearances are deceitful— that intrigues are even now in progress to unseat him—and that even a-very remote chance of success will be eagerly seized upon by his opponents to thrust him out, and one of their own crea- tures in.

Mr. JENKINS returned from India, four or five years ago, with a moderate fortune, a clear conscience, and, we trust, a sound liver. By the unaided force of talent and character, he raised himself to one of the highest posts in the Company's civil service; and, we believe, has, since his return, been offered an embassy to Persia. He came forward as a supporter of the Duke of WELLINGTON, at a time when his Grace was supposed by many to be -at least a Mo- derate Reformer. His political creed was declared in his opening speech on the hustings, and certainly sounded very like that of a liberal mid enlightened man. We are compelled to say that his subsequent conduct has falsified the just expectation which his professions then raised. He has uniformly voted against Reform and Retrenchment; he has taken part with the Boroughmongers against the People; and, notwithstanding his acknowledged ta- lents, has disqualified himself from being the representative of any but the slavish. junta of Corporation men and Tories, who, with the aid of the consistent Earl of TANKER VILLE'S voters, and the exertions of a remarkably clever, discreet, and indefatigable agent, will almost certainly secure his return by a large majority. "The worthy and independent electors of Shrewsbury" (what a bitter insult do. these terms convey !) will thus probably be represented by two gentlemen, who, as far as the great and leading questions of the day are concerned, will neutralize each other's votes ; and who may therefore as well go and enjoy a Continental tour, as waste their health and time in an unprofitable attendance in the House of Commons.

Wenlock, just escaped from Schedule B, has hitherto been re- presented by a Whig, returned by Lord WENLOCK'S influence; and a Tory, by that of Lord FORESTER and Sir WAritiNWILLialr WYNNE. The Whig, Mr. P. BEILBY THOMPSON, resigns Weil- lock, and is a candidate for Warwickshire. We hope that his new constituents will find him a more efficient member than he has hitherto proved himself to be ; for on reference to the Lists of Divisions, we are sorry to find him very frequently marked Absent; and it will be difficult to discover in what other way he has made amends for this neglect of duty. Mr. CECIL FORESTER, the Tory member, will be again returned. He is a Tory after the Duke of WELLINGTON'S own heart. He votes regularly, speaks not at all, and manifests a strong aristo- cratic repugnance to be of the slightest public service to his fellow- men. A Whig member will, we presume, be found to replace Mr. TuompsoN ; and thus Wenlock also will count as a cipher in the new Parliament. We understand that Mr. MATTHEW BRIDGES, a gentleman retired from the legal profession, and at present re- siding in Bristol, will be invited to stand on the Liberal interest for this borough. Our information leads us to believe, that it would be difficult for the electors to make a more judicious choice.. There will be a strong contest for Bridgnorth. The candidates are Mr. CBARLTON WHITMORE, son of the would-be member for the county; Mr. R. PIGOTT, son of Sir GEORGE PIGOTT, an in- significant Baronet in the neighbourhood; and Mr. TRACY LEGH, a gentleman, not resident, but possessing a large property in and near Bridgnorth. Of these, Mr. WHITMORE is, no doubt, a Tory, though he shrinks from a manly avowal of his principles such as they are. His father's local influence is too much cut up to permit his standing upon the old Boroughmongering ground ; and he therefore beats about the bush, crawling between earth And hea- ven, trusted by neither party, and desirous cf cajoling both. Al- together, Mr. WHITMORE is a very pitiful politician. iNobody has been able, as yet, to find out what may be the poli- tical opinion of Mr. PIGOTT;---a sufficient reason of itself for re- jecting him at once ; for we cannot conceive how a man can offer a greater insult to the constituency whose votes he solicits, than by evading all avowals of his opinion on leading topics. If, as is sometimes pretended, and we believe often truly enough, the can- didate has really no clear views of questions theoretically and practically of great importance, how daring must be his assurance in offering himself to guide and represent those of others ? Mr. TRACY LEGH is a Whig and a Liberal. We are glad to hear that he will probably be at the head of the poll, and that the contest will be between the two "waiters upon Providence."

We cannot close these remarks on the subject of the approaching elestion at Bridgnorth, without adverting to the disgrace which attaches to the county at large, and this borough in particular, for their neglect of one of the most talented, indefatigable, and independ- ent men in England. We allude to Mr. WOLRYCHE WHITMORE, who is driven, as it were, from his native county to canvass the new borough of Wolverhampton. His services will, we are sure, be duly appreciated by the spirited inhabitants of that important place. But Shropshire is remarkably bare of men of talent in the higher classes of society ; and here is one who goes far to redeem their character from the too just imputation of slavishness and incapacity; ylit, with a miserable shortsightedness, they thrust him out from among them, and open their arms to welcome the mawkish imbecility of his inane relative of Apley Park. Turn we now to Ludlow; and here we find the new constitu- ency at length emancipated from the control of the servile Cor- poration, waging an active and uncompromising warfare with the domineering house of Cum There were formerly about thirty voters in Ludlow, the. Majority of whom were bound hand and foot, body and soul, to do the bidding of the Earl of Powis, and his shrewd and plausible son. The Reform Bill, however, has knocked off the fetters which bound the inhabitants of this beau- tiful little town. The Independent party have invited Mr. Ro- &ILLY, son of the late Sir SAMUEL, and Mr. DAVIES, a Radnor- Shire gentleman, both Liberals of course, to oppose Lord CLIVE and his brother. The result of this contest is very dubious. We are inclined to think that Mr. CLIVE will be returned with Mr. UOMILLY; but we should not be at all surprised if both the old members should find themselves in a minority. The pretensions of Mr. CLIVE are soon summed up. He has a good estate in the neighbourhood, and votes constantly with his brother against every attempt to enlighten the minds or enlarge the privileges ef his fellow-subjects. Lord CLIVE is too well known to require any description here. He is a sagacious, clear-headed man of business, with perhaps the most insinuating address and plausi- ble exterior of any Tory leader in the kingdom. He is closely connected with the powerful families of MONTROSE, NORTHUM- BERLAND, and WYNNE; and, although no debater, is a formi- dable Parliamentary tactician. The Reform Bill, by rendering the tenure of his Welsh borough interest precarious, by enfranchising Ludlow, and disfranchising that despicable mass of rottenness, Bishop's Castle, has struck a heavy blow on the unconstitutional influence of this active politician. From this summary, it would appear that the four Shropshire boroughs will probably return each a Whig: and a Tory at the en- suing elections. In one point of view, this result-would appear absurd and abortive : but if we call to mind what was the poli- tical state of the county a few years ago, we shall not be quite so dissatisfied with the present aspect of affairs nor shall we by any Means despair cf its future improvement. Till very lately, the re- turns gave the Tories a majority on the whole representation of the county of at least six members,—the numbers being, nine Tory, and three Liberal. We think that we may safely calculate on re- ducing this majority at the next election to three, and, we hope, to One. If, therefore, Liberal opinions are still kept too much in the background, they are at all events progressive in Shropshire; and, judging from present appearances, we expect soon to see them in advance. We can inform the Tories, then, for their com- fort, that their stronghold of intolerance is beleaguered by troops who have lately been sharpening their weapons, and are constantly receiving reinforcements ; and that they will consequently best consult their own interest and safety by sending a flocs of surrender before it be too late.