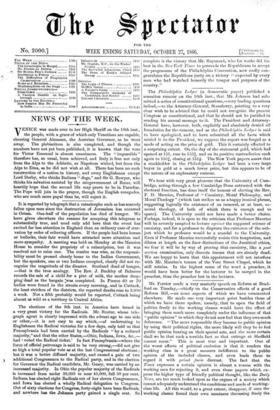 VENICE was made over to her High Sheriff on the 18th inst., the people, with a grace of which only Venetians are capable, cheering General Alemann, the Austrian Governor, as he went away. The plebiscitum is also completed, and though the numbers have not yet been published, it is known that the vote for Victor Emanuel is almost unanimous. The " impossible " therefore has, as usual, been achieved, and Italy is free not only from the Alps to the Adriatic, as Napoleon wished, but from the Alps to Etna, as he did not wish at all. There has been no such resurrection of a nation in history, and every Englishman except Lord Derby, who thinks Italians " dogs," and Sir G. Bowyer, who thinks his salvation assisted by the misgovernment of Rome, will heartily hope that the second life may prove to be in Paradise. The Pope will join in the prayer, though the English renegades, who are much more papal than he, will reject it.