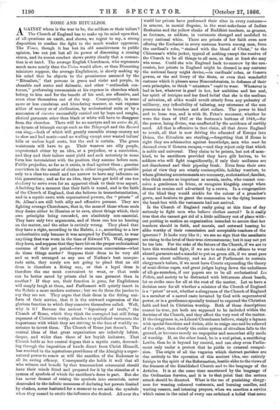 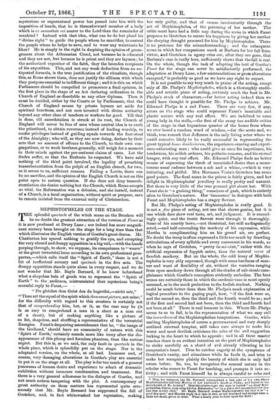 Is the Church of England really going at this time of day seriously to fight men who believe clothes sacred? Is it really true that she cannot get rid of a little millinery out of place with- out putting in motion an organization intended to secure that.her teachers should in faith, and morals, and outward bearing be alike worthy of their commission and acceptable, teachers of the ignorant ? It looks very like it ; we see no sign that the assailants are rising to the level of their true circumstances; but it may not yet be too late. For the sake of the future of the Church, if we are to have this wretched fight, if we are to make it an offence to wear absurd garments and a scandal to put on green silk, if we must pass a canon about millinery, and an Act of Parliament to restrain clergymen's tailors, if we must have Courts expounding the theory of semi-divine capes, and great judges laying down the unholiness of all-go-rounders, if our papers are to be all ecclesiastical Les Follets, and society to be distracted with bitterness about bands, let us strike once for all at the root of the matter. Let us have a decision once for all whether a minister of the Church of England is a "priest" or not, whether a clergyman of the Church.of England is a member of a sacred caste invested by God with supernatural power, or is a gentleman specially trained to expound the Christian faith and lead in Christian worship. Both of those descriptions cannot be true, yet both are supposed to be included within the doctrine of the Church, and they affect the very root of the matter. If the clergyman is, as Liberal Churchmen believe, simply a layman with special functions and duties, able to resign one and be relieved of the other, then clearly the entire system of ritualism falls to the ground, or becomes merely an unpopular and somewhat silly mode of worship. If, on the other hand, he is a real priest, a sacrificing Levite, then he is beyond lay control, and can obey even Parlia- ment only under a protest that he yields to external compul- sion. The origin of all the vagaries which distract parishes are due entirely to- the operation of this ancient idea, one entirely foreign to the spirit of the Reformation, hostile alike to-the views of the framers of the Established Church and to the language of the Articles. It is at the same time sanctioned by the language of the Ordination Service, and it is to- that point that the serious attack should be directed. What is the use of punishing clergy- men for wearing coloured vestments, and burning candles, and 1 waving censers, and intoning prayers, when we sanction a service which raises in the mind of every one ordained a belief that some mysterious or supernatural power has passed into him with the imposition of hands, that he is thenceforward member of a body which is ex necessitate rei nearer to the Lord than the remainder of mankind ? Imbued with that idea, what can he do but plead his "divine right" to guide the people whom he sanctifies, to control the people whom he helps to save, and to wear any waistcoats he likes? He is simply in the right in despising the opinion of green- grocers about the Athanasian Creed, not because-he is educated and they are not, but because he is priest and they are laymen ; he the authorized expositor of the faith, they the bounden recipients of his exposition. This, and not any weak deduction from an an- tiquated formula, is the true justification of the ritualists, though this, as Rome shows them, does not justify the silliness with which they postpone essential to indifferent things ; and it is this on which Parliament should be compelled to pronounce a final opinion, in the first place in the shape of an Act declaring ordination in the Church of England as dissoluble as any other diploma. Then it must be decided, either by the Courts or by Parliament, that the Church of England means by priests laymen set aside for spiritual functions, and not men invested with divine authority beyond any other class of teachers or workers for good. Till that is done, till sacerdotalism is struck at its root, the Church of England will never be free of men whose central idea is to exalt the priesthood, to obtain reverence instead of leading worship, to -confer privileges instead of guiding equals towards the foot-stool of the Almighty; who will, as they are now doing, declare by their acts that no amount of offence to the Church, to their own con- gregations, or to weak brethren generally, will weigh for a moment in their minds against the pre-eminent claims of caste. Let the Sudra suffer, so that the Brahmin be respected. We have said nothing of the third point involved, the legality of preaching transubstantiation from the pulpit of an English church, for two, as it seems to us, sufficient reasons. Failing a Levite, there can be no sacrifice, and the opinion of the English Church is not on this point open to serious question. If she does not deny transub- stantiation she denies nothing but the Church, which Rome accepts as vital, the Reformation was a delusion, and she herself, instead of a Church, is a local organization, without spirit or purpose, save to remain isolated from the external unity of Christendom.