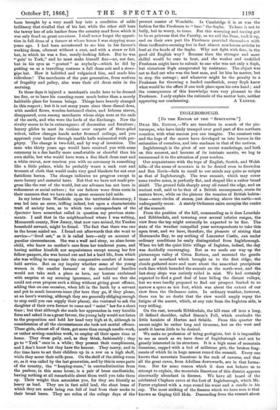 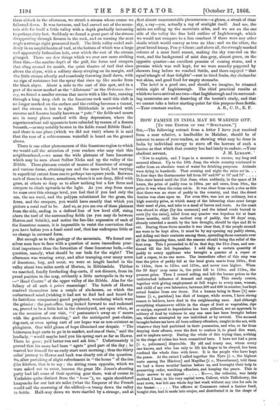 [ro THE EDITOR OF THE " SPECTATOR."] DEAR Mn. Enrroa,—We are travellers in search of the pic- turesque, who have lately tramped over good part of five northern counties, with what success you can imagine. The constant rain and the bogs of the moors have developed us into heroes in the estimation of ourselves, and into madmen in that of the natives.

Ingleborongh is the pivot of our recent wanderings, and both on this account, and because of its intrinsic merits, we beg to recommend it to the attention of your readers.

Our acquaintance with the tops of English, Scotch, and Welsh hills—if the name of mountain is to be denied even to Snowdon and Ben Nevis—fails to recall to our minds any quite so unique as that of Ingleborough. The true summit, which may cover some twelve acres, is perfectly flat, and shaped like a rather broad shield. The ground falls sharply away all round the edge, and an ancient -wall, said to be that of a British encampment, crests its eastern brow, while on the plateau the remains of British habita- tions—mere circles of stones, just showing above the earth—not unfrequently occur. A stately Ordnance cairn occupies the centre of the summit.

From the position of the hill, commanding as it does Lunedale and Ribblesdale, and towering over several inferior ranges, the view from the top might naturally be expected to be fine. The state of the weather compelled your correspondents to take this upon trust, and we have, therefore, the pleasure of stating that Morecambe Bay, to say nothing of Lancaster Castle, can under ordinary conditions be easily distinguished from Ingleborough. When we left the quiet little village of Ingleton, indeed, the day was decidedly encouraging. But as we made our way up the picturesque valley of Crina Bottom, and mounted the gentle ascent of moorland which brought us to the first ridge, the clouds gathered more and more about the somewhat precipitous rock face which bounded the summit on the north-west, and the last steep slope was entirely veiled in mist. We had certainly expected to find a good deal of haze hiding the distant valleys, but we were hardly prepared to find our prospect limited to so narrow a space as ten feet, which was about the extent of our view from the Ordnance cairn. In ordinary weather, however, there can be no doubt that the view would amply repay the fatigue of the ascent, which, at any rate from the Ingleton side, is very trifling.

On the east, towards Ribblesdale, the hill runs off into a long, ill defined shoulder, called Simon's Fell, which overlooks the little hamlets of Horton and Selside. From this quarter the ascent might be rather long and tiresome, but on the west and south it leaves little to be desired.

We make no profession of being geologists, but it is impossible to see as much as we have done of Ingleborough and not be greatly interested in its structure. It is a high mass of mountain limestone, capped with a bed of millstone grit, the broken frag- ments of which lie in huge masses rows d the summit. Every one knows that mountain limestone is the rock of caverns, and that all the great caves, from Adullam downwards, are in that forma- tion. But for some reason which it does not behove us to attempt to explain, the mountain limestone of this district appears abnormally abundant in fissures. We have all heard of the celebrated Clapham caves at the foot of Ingleborough, which Mr. Farrer explored with a rope round his waist and a candle in his cap. The most striking of the fissures which we have seen is that known as Gaping Gill Hole. Descending from the summit about three o'clock in the afternoon, we struck a stream whose course we followed down. It was tortuous, and had carved out of the moun- tain side for itself a little valley with a depth gradually increasing to perhaps sixty feet. Suddenly we found a great part of the stream disappearing through fissures in the rock, and on turning the next angle a strange sight presented itself. The little valley ended sud- denly in an amphitheatre of turf, at the bottom of which was a large and apparently fathomless hole, over which the rest of the stream plunged. There are few things which we ever saw more striking than this,—the sombre depth of the gulf, the ferns and creepers that cling around its mouth, the quiet theatre of turf that rises above the abyss, with a solitary sheep straying on its margin, and the little stream silently and ceaselessly throwing itself down, with no sign of resistance but the spray that rises up like smoke from the black abyss. About a mile to the east of this spot, and in a part of the moor marked as the "Allotment" on the Ordnance Sur- vey, we found a smaller stream that meets with a like fate, running through a long deep cleft in the limestone rock until this cleft is no longer marked on the surface and the cutting becomes a tunnel, and the stream is lost to sight. Ribblesdale is crowded with caverns and fissures locally known as " pots :" the fields and moors are in many places marked with deep depressions, where the superincumbent soil appears to have subsided by reason of a fissure beneath,—as may notably be seen in the fields round Ribble Head : and there is one place (which we did not visit) where it is said that the roar of a subterranean waterfall is heard on the ground above.

There is one other phenomenon of this limestone region to which we would call the attention of your readers who may visit this neighbourhood, —we mean the wide plateaus of bare limestone which may be seen about Sulber Nicks and up the valley of the Ribble. These plateaus consist of masses of limestone of strange and various forms, attaining one and the same level, but varying in superficial extent from one to perhaps ten square yards. Between each of these is a fissure, sometimes, where it is not deep, filled with grass, at others so deep as to allow nothing but a few ferns and creepers to climb upwards to the light. As you step from mass to mass over this strange level, you feel that if you had only the sea, the sea weed, and the polypes substituted for the grass, the ferns, and the creepers, you would have exactly that which you picture a coral reef to be. And so, as you see one of these plateaus from the side, ending in a defined line of low level cliff, rising above the turf of the surrounding fields (as you may do between Horton and Selside), and notice the fan-like expansion of each of the limestone masses, it is impossible to resist the conviction that you have before you a fossil coral reef, that has undergone little or no change in outward form.

But enough as to the geology of the mountain. We found our- selves soon face to face with a question of more immediate prac- tical importance than the formation of these limestone beds,—the question, namely, what should be our beds for the night? The afternoon was wearing away, and after tramping over many acres of limestone, bog, and moor, we were at length landed in the valley about two miles north of Horton, in Ribblesdale. Thither we marched, fondly foreboding dog-carts, if not dinners, from its proud position in the map, evidently a little metropolis in its way --" Head Centre" of the upper valley of the Ribble. Alas for the fallacy of all such a priori reasonings ! The hotels of Horton resolved themselves into a couple of ale-houses, on which the embarrassed mind (wishing it had not to find bed and board for its fastidious companion) gazed perplexed, wondering which were the grimier ; the post-office, long looked forward to and reckoned on, proved to be a little but in the churchyard, not open when, as on the occasion of our visit, " t' postmaster's away on t' moors with the gentlemen shooting," and the anticipated post-chaise, dog-cart, or even spring cart of our hopes was as non-existent as phlogiston. One wild gleam of hope illumined our despair. "The battermen kept carts to go in to market, and one of them," said the landlady, " would maybe lend you his spring cart as far as Hawes. There he goes ; yo'd better run and ask him." Unfortunately it proved that his mare had been " agate " good part of the day ; be wanted her himself for an early start next morning ; thus the thirty miles' journey to Hawes and back was clearly out of the question. So, after partaking of slight refreshment in " the house " of the inn (the kitchen, that is to say ; the sitting room opposite, which we were asked not to enter, because the great Mr. Jones's shooting party had left some of their sporting gear there, was of course in Yorkshire quite distinct from the " house "), we again shouldered knapsacks for our last six miles (what the Emperor of the French would call the crowning of the edifice)—a tramp down the valley to Settle. Half-way down we were startled by a strange, and at

first almost unaccountable phenomenon—a gleam, a streak of clear sky, a ray—yes, actually a ray of sunlight itself. And see, the mists are rolling up the mountain sides, and we see on the one side of the valley the fine bold outline of Ingleborough, which we would not compare to a lion couchant if there were any other simile which would convey as true an idea ; and on the other, the great broad hump, Pen-y-Ghent; and above all, the stronglymarked colours of a most lurid sunset, making the sky rose-red on the west, and the background of mist dun-grey, almost green, on the opposite quarter—an excellent promise of coming storm, and a promise which was well kept, for we were soundly peppered by showers long before we reached Settle, and there enjoyed " that equal triangle of dear delights"—rest to tired limbs, dry clothes for wet skins, and good food for empty stomachs.

The hotel is a good one, and should, we imagine, be situated within sight of Ingleborough. The chief practical results at which we have arrived are two--that Ingleborough and its surround- ing mountains are well deserving of the tourist's study, and that ' we cannot take a better starting-point for this purpose than Settle.