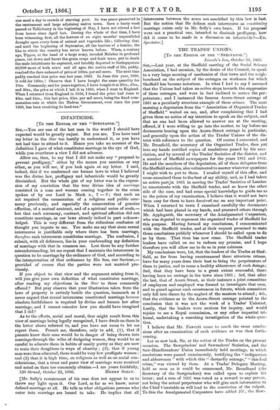 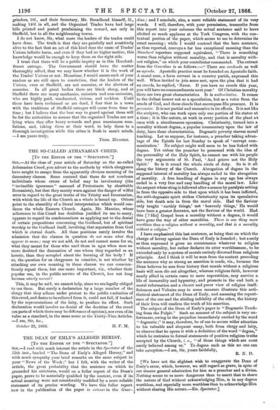 Lincoln's inn, October 24, 1866. SIR,—Last year, at the Sheffield meeting of the Social Science Association, I had occasion, by the desire of the Council, to speak to a very large meeting of mechanics of that town and the neigh- bourhood on the subject of the outrages on workmen for which Sheffield has become notorious. In what I had to say I assumed that the Unions had taken no active steps towards the suppression of these outrages, and were in fact inclined to screen the per- petrators ; and I instanced the famous Acorn-Street outrage of 1861 as a peculiarly atrocious example of these crimes. The next morning a deputation from the " Association of Organized Trades of Sheffield" waited on me, and, after complaining that I had given them no notice of my intention to speak on the subject, and that no one had be en allowed to answer me at the meeting, offered, if I were willing to go into the matter, to lay before me documents bearing upon the Acorn-Street outrage in particular, and generally upon the action of the Trades' Unions of the dis- trict with reference to the question. Of course I consented, and Mr. Dronfield, the secretary of the Organized Trades, then put into my hands certified copies of resolutions passed by his asso- ciation, and by several of the Trades' Societies of the district, and a number of Sheffield newspapers for the years 1861 and 1862. He and the members of the deputation, all of them delegates from the Sheffield societies, also volunteered to answer whatever questions I might wish to put to them. I availed myself of this offer, and cross-examined them to the best of my ability, and, as I had taken an active partin 1861 in moving the Trades' Societies of London to remonstrate with the Sheffield trades, and so knew the other side of the case, and had some special knowledge to guide me as to the points of my examination, I believe that it would not have been easy for them to have deceived me on any important point. When I returned to town I examined carefully the documents which had been placed in my hands, and procured others through Mr. Applegarth, the secretary of the Amalgamated Carpenters, who was deputed to represent the organized trades of Sheffield for this purpose. Having formed my conclusions, I communicated with the Sheffield trades, and at their request promised to state those conclusions publicly whenever I should be called upon to do so by them. That time has now come. The Sheffield trades leaders have called on me to redeem my promise, and I hope therefore you will allow me to do so in your columns.

My conclusions were, 1st, that the leaders of the Trades at Shef- field, so far from having countenanced these atrocious crimes, have for many years done their best to bring the perpetrators of them to justice, and to rouse a healthy abhorrence of such doings; 2nd, that they have been to a great extent successful, there having been no outrage in the town since 1861 ; 3rd, that after the last, that of Acorn Street, at their instance a joint committee of employers and employed was formed to investigate that case, and to guard against such occurrences in future, which committee only fell into disuse by the neglect of the masters to attend ; 4th, that the evidence as to the Acorn-Street outrage pointed to the conclusion that it was not the work of a Trades' Unionist. Lastly, that the leaders were anxious for inquiry, and would rejoice to see a Royal commission, or any other impartial tri- bunal, undertaking a searching investigation of the whole ques- tion.

I believe that Mr. Fawcett came to much the same conclu- sions after an examination of such evidence as was then forth- coming.

Let us now look, Sir, at the action of the Trades on the present occasion. The Sawgrinders' and Sawmakers' Societies, and the Saw-Handlemakers' Union immediately held meetings, in which resolutions were passed unanimously, testifying the "indignation and abhorrence " with which this " dastardly outrage," " this foul crime," was viewed by them. At a Trades' Delegate Meeting, held as soon as it could be summoned, Mr. Broadhead (the Secretary of the Sawgrinders) was called upon to explain his letter ; and a sum of 1001. was voted as a reward to any person, not being the actual perpetrator who will give such information to the Chief Constable as will lead to the conviction of the culprit. To this the Amalgamated Carpenters have added 25/., the Saw- grinders, 101., and their Secretary, Mr. Broadhead himself, 5/., making 140/. in all, and the Organized Trades have had large bills printed and posted proclaiming the reward, not only in Sheffield, but in all the neighbouring towns.

I do not know, Sir, what more the leaders of the trades could have done. The truth is that they are painfully and sensitively alive to the fact that an act of this kind does the cause of Trades' Unions infinite harm, and even if they had no higher motive, this knowledge would be enough to keep them on the right side.

I trust that there will be a public inquiry as to this Hereford- Street outrage. The Government should have the matter thoroughly sifted, that we may know whether it is the work of the Trades' Unions or not. Meantime, I would assure such of your readers as are still open to conviction, that the leaders of the Unions, even at Sheffield, are not assassins, or the abettors of assassins. In all great bodies there are black sheep, and at Sheffield there are many mechanics, unionists and non-unionists, who are highly paid, uneducated, vicious, and reckless. Until these have been reclaimed or are dead, I fear that in a town with the traditions of Sheffield outrages will occur from time to time ; but I believe that the best way to guard against them will be for the authorities to assume that the organized Trades are not lying when they offer heavy rewards and pass unanimous reso- lutions, and, taking them at their word, to help them to a thorough investigation while this crime is fresh in men's minds. —I am yours truly,