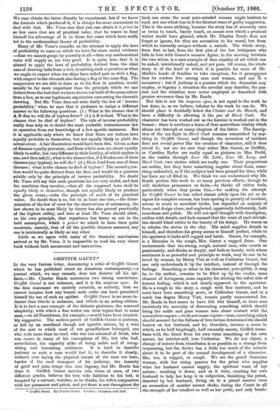 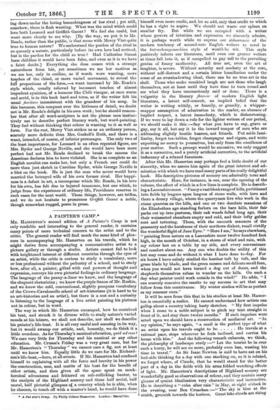 of Griffith Gaunt, which he has published about an American contemporary,—a journal which, we may remark, does not deserve all his epi- thets,—Mr. Charles Reade announces two strong convictions. Griffith Gaunt is not indecent, and it is his magnum opus. In the first statement we entirely coincide, so entirely, that we cannot imagine how any honest male critic can have permitted himself the use of such an epithet. Griffith Gaunt is no more in- decent than Othello is indecent, and Othello in an acting edition. It is in fact a rare example of the delicate plainness, the reserved simplicity, with which a fine writer can treat topics that to some men,—to all Frenchmen, for example,—would have been irresisti- bly suggestive. The motive-power of Griffith Gaunt is jealousy, as felt by an unrefined though not ignoble nature, by a man of the sort to which most of our grandfathers belonged, one who rode more than he read, who was not ashamed of drink, who was coarse in many of his conceptions of life, but who had, nevertheless, the capacity alike of being noble and of recog- nizing and honouring nobleness. It is hard to describe jealousy as such a man would feel it, to describe it closely, without ever laying the physical nature of the man too bare, harder if the mad transport of his jealousy, the insanity of grief and pain, tempt him into bigamy, but Mr. Reade has done it. Griffith Gaunt marries two wives at once, of two different grades, believes his true wife faithless to his bed, is tempted by a servant, watches, as he thinks, his wife's assignation with her paramour and priest, and yet there is not throughout the

book one scene the moat pure-minded woman might hesitate to read, not one which has in it the faintest trace of guilty suggestion. This is the more striking, because the story has of necessity once or twice to touch, barely touch, on scenes over which a prurient writer would have gloated, which Mr. Charles Reade does not forget or ignore, for they are necessities to his moral, but from which he instantly escapes without a smirch. The whole story, from first to last, from the first plot of the low intrigante who falls in love with Gaunt's massive figure, to the meeting between the two wives, is a rare example of that chastity of art which can be naked, intentionally naked, and yet pure. Of course, the whole story is of the kind at which it is possible for some of Mr. Mudie's heads of families to take exception, for it presupposes that its readers live among men and women, and not in a monastery ; but if jealousy is a passion which the dramatist may employ, or bigamy a situation the novelist may describe, the pas- sion and the situation were never employed or described with greater reverence than by Mr. Reade.

But this is not his magnum opus, is not equal to the work he has done, is, as we believe, inferior to the work he can do. We should place it decidedly below the Cloister and the Hearth, and have a difficulty in allowing it the pas of Hard Cash. No character has been worked out as the heroine is worked out in the former ; there is nowhere a trace of that marvellous vitality which shines out through so many chapters of the latter. The descrip- tion of the sea fight in Hard Cash remains unmatched by any- thing in Griffith Gaunt, and though the invention of incident does not reveal power like the creation of character, still it does reveal it; nor are we sure that either Mrs. Gaunt, or Griffith, or Caroline Ryder are really equal as pictures to Mrs. Dodd, as she rustles through Love Me Little, Love Me Long, and Hard Cash, two stories which are really one. Their proportions are nobler, but they have something angular about them, some- thing unfinished, as if the sculptor had been pressed for time, while her lines are all filled in. We think we can understand why Mr. Reade prefers this work to so many previous efforts, though he will doubtless pronounce us fools,—he thinks all critics fools, particularly when they praise him,—for making the attempt. In Griffith Gaunt he has relied almost solely upon his art as de- signer for complete success, has been sparing to poverty of incident, averse to scorn to novelists' tricks, has depended on majesty of form and design alone, and neglected, apparently deliberately, both roundness and polish. He will not spoil thought with description, outline with details, and feels amazed that the want of such triviali- ties should blind critics to the beauty of his design. He wants us to admire the statue in the clay. His mind supplies details to himself, and therefore his group seems to himself perfect, while to the spectator it looks still rugged and harsh. Gaunt, for example, is a Hercules in the rough, Mrs. Gaunt a rugged Juno. One understands that the strong, rough, natural man, who courts so passionately, and drinks so deeply, and feels so keenly, with whom sentiment is so powerful and principle so weak, may be one to be loved by women, by Mercy Vint as well as Catherine Gaunt, but one only understands it by the intellect, instead of through the feelings. Something or other in his character, perceptible, it may be, to his author, remains to be filled up by the reader, some element of lovingness, some capacity for stirring the softer side of human feeling, which is not clearly apparent to the spectator. He is a rough in the story, a rough with fine instincts, and he must have been something more, or Catherine Gaunt, and in a much less degree Mercy Vint, remain partly unaccounted for. Mr. Reade in fact seems to have felt this himself, to have seen intuitively the necessity of discovering something which should bring the noble and pure woman into closer contact with the naturalbut impure —wedo not mean impure—man, something which should account for the fullness of love he has determined she should bestow on her husband, and he, therefore, invents a scene in which, as he half laughingly, half earnestly asserts, Griffith trans- fuses with the blood from his own veins something of his own nature, his interior-self, into Catherine. We do not object, a change of nature from transfusion is as possible as a change from trepanning, but the device has a little too much of the miracle about it to be part of the normal development of a character. She, too, is rugged, or rough. We see the grand J unonian woman, with her rising passion for the priest who supplies what her husband cannot supply, the spiritual want of her nature; crushing it down, and as it were, courting her own husband to help her keep it in subjection, banishing the priest, deserted by her husband, living on in a proud reserve even an accusation of murder cannot shake, facing the Court in all the strength of her intellect as well as her pride, and only break-

ing down under the loving beseechingness of her rival ; yet still, somehow, there is flesh wanting. What was the mind which could love both Leonard and Griffith Gaunt? We feel she could, but want more clearly to see why. [By the way, we put it to Mr. Reade, rather than the public, is that scene with Mercy Vint quite true to human nature? We understand the pardon of the rival in sa queenly a nature, particularly before its own love had revived, but is the pardon for the child so true ? Had Catherine Gaunt been childless it would have been false, and even as it is we have a - faint doubt.] Everything she does comes with a strange naturalness from her, yet sometimes we see her motives as we see her, only in outline, as if words were wanting, more touches of the chisel, or more varied movement, to reveal the full proportions of the form,—a want increased by Mr. Reade's style which, usually relieved by incessant touches of almost impudent cynicism, of a humour like Chili vinegar, at once warm and acrid, is in this book hard and terse, as if the writer felt his usual fiariture inconsistent with the grandeur of his song. In this bareness, this conquest over the littleness of detail, we doubt not is Mr. Reade's delight in his own work; but he should remem- ber that after all word-sculpture is not the phrase men instinc- tively use to describe perfect literary work, but word-painting. They feel without thinking that colour is wanting to it as well as form. For the rest, Mercy Vint strikes us as an ordinary person, scarcely more definite than Mrs. Gaskell's Ruth, and there is a want, intended, of course, of inferior personages. The only two of the least importance, for Leonard is an often repeated figure, are Mrs. Ryder and George Neville, and she would have been more perfect had not Mr. Reade declined to break the canons the American declares him to have violated. She is as complete as an English novelist can make her, but only a French one could do more than just sketch in Caroline Ryder, while George Neville is a blot on the book. He is just the man who never would have married the betrayed wife of his own former rival. Her happi- ness is a defect in art, a recompense which Mr. Reade, in his love for his own, has felt due to injured innocence, but one which, to judge from the experience of ordinary life, Providence reserves in such cases for the next world. These things, however, are trifles, and we do not hesitate to pronounce Griffith Gaunt a noble, though somewhat rugged, poem in prose.