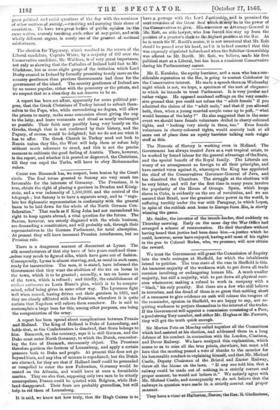 Page 2, 27 October 1866 — The election for Tipperary, which resulted in the return of
Close

The election for Tipperary, which resulted in the return of

the Liberal candidate, Captain White, by a majority of 687 over the Conservative candidate, Mr. Waldron, is of very great importance; not only as showing that the Catholics of Ireland hold fast to Mr. Gladstone, but as some alight gauge of the irritation which Lord Derby created in Ireland by formally promising to rely more on the country gentlemen than previous Governments had done for the government of the island. The country gentlemen of Ireland are by no means popular, either with the peasantry or the priests, and we suspect that as a class-they danot deserve to be so.