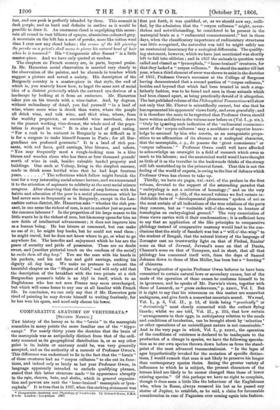 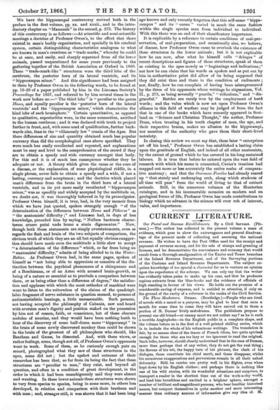 THE history of the heresy as to the " fornix " in the marsupials resembles in many points the more familiar one of the " hippo- campi." For nearly thirty years the doctrine that the brain of the marsupials was as antipodally distinct from that of the ordi- nary mammal as its geographical distribution is, or as any other point in its habits or anatomy could be, was very generally accepted, and on the authority of a memoir of Professor Owen's. This difference was understood to lie in the fact that the " fornix" of these creatures had no "corpus callosum" to eke out its func- tions, and indeed only so lately as last year Professor Owen, in language apparently intended to exclude qualifying phrases, stated that this latter structure made " its appearance abruptly in the rats, shrews, bats, and sloths, which in general organiza- tion and powers are next the ' loose-brained' marsupials or lyen- cephala." It is true that in 1837, when this striking statement was Comparative Anatomy and Physiology of Vertebrates. By It:chard Owen, F.R.S. 2 Tula London : Lougmans. 1860. first put forth, it was qualified, or, as we should now say, nulli- fied, by the admission that the "corpus callosum" might, never- theless and notwithstanding, be considered to be present in the marsupial brain as a " rudimental commencement ;" but in those days, when the classificatory importance of rudimentary structures was little recognized, the naturalist was told he might safely use an anatomical inaccuracy for a zoological differentia. The qualify- ing statement, however, which we have just mentioned was shortly left to fall into oblivion ; and in 1857 the animals in question were called and classed as " lyencephala," " loose-brained" creatures, for that they lacked a " corpus callosum." So stood the matter till last year, when a third element of error was shown to exist in the doctrine of 1857, Professor Owen's successor at the College of Surgeons having demonstrated that a second portion of "corpus callosum," besides and beyond that which had been treated in such a step- fatherly fashion, was to be found and seen in those animals which had been classed apart, as being practically devoid of it altogether. The last publishedvolume of the Philosophical Transactions will show not only that Mr. Flower is scientifically correct, but also that he has represented his opponents' views fairly, and even gracefully; and it is therefore the more to be regretted that Professor Owen should have written as follows in the volume now before us (Vol. I., p. xix.). "Only by ignoring such indication of the ' rudimental commence- ment of the corpus callosum' may a semblance of superior know- ledge be assumed by him who asserts, as an antagonistic propo- sition to an affirmation of its absence as a zoological character, that the marsupialia, e. g., do possess the ' great cominissure ' or ' corpus callosum.' " Professor Owen could well have afforded to acknowledge an oversight in a field of research which owes so much to his labours; and the anatomical world would have thought as little of it as the traveller in the backwoods thinks of the stump still left unstubbed up in the primeval forest. That this is not the feeling of the world of experts, is owing to the line of defence which Professor Owen has chosen to take up.

Thirdly, we have six pages, xxi.-xxvi. of the preface in the first volume, devoted to the support of the astounding paradox that embryology is not a criterion of homology ;" and on the very last page but one, p. 585, of the second volume we find certain in- dubitable facts of " developmental phenomena" spoken of not as the most certain of all indications of the true relations of the parts they concern, but as " veritable will-o'-the-wisps to hunters of homologies on embryological ground." The very enunciation of these views carries with it their condemnation ; it is sufficient here to say that an application of the like principles to comparative philology instead of comparative anatomy would lead to the con- clusions that the study of Sanskrit was but a " will-o'-the-wisp" to the student of Bengali, that the natural history of the language of Zoroaater cast no trustworthy light on that of Firdusi, Ennins' none on that of Juvenal, Juvenal's none on that of Dante, Chaucer's none on that of Tennyson, and in short, that all that philology has concerned itself with, from the days of Samuel Johnson down to those of Max Muller, has been but a " hunting" of chimeras.

ago known and only recently forgotten that this self-same " hippo- campus " and its " cornu " varied in much the same fashion within the single species man from individual to individual. With this there was an end of their classificatory importance.

It is explicable by a reference to certain conditions of mal-pre- servation, of mal-preparation, and occasionally also, we believe, of disease, how Professor Owen came to overlook the existence of these structures in the lower animals ; but it is not explicable how he can now, after what he himself calls " deluges " of recent descriptions and figures of these structures, speak of them as existing in the apes merely as " beginnings and indications ;" nor how he can claim that his words as spoken and as put out by him in authoritative print did allow of its being supposed that they did exist thus and there in the condition of rudiments nor, finally, how he can complain of having been misrepresented by the three of his opponents whose writings he stigmatizes, Vol. II., p. 273, as being severally " puerile," " ridiculous," and " dis- graceful." Battles are rarely won by the employment of hard words; and the value which is now set upon Professor Owen's alliance in this field of warfare may be judged of from the fact that in one of the books which have recently appeared in Scot- land on "Science and Christian Thought," the author, Professor Duns, when treating in his tenth chapter of man, the ape, and their respective brains, makes no allusion to the hippocampi, nor mention of the authority who gave them their short-lived notoriety.

In closing this review we must say that, these later " enterprises set off his head," Professor Owen has established a lasting claim upon the gratitude of English, and indeed of all other anatomists, by the extent of ground which he has covered in his long sustained labours. It is true that before he entered upon the vast field of research with which his name is connected, Cuvier's treatises had mapped out more or less accurately the entire realm of compara- tive anatomy ; and that the Ossemens Fossiles had already reared up " that stately and undecaying arch, along which students of all time will pass" from the world of living to that of extinct animals. Still, in the numerous volumes of the Hunterian catalogue, and in his innumerable memoirs on modern and on geological forms of life, Professor Owen has made contributions to biology which no advance in the science will ever rob of interest, value, and importance.