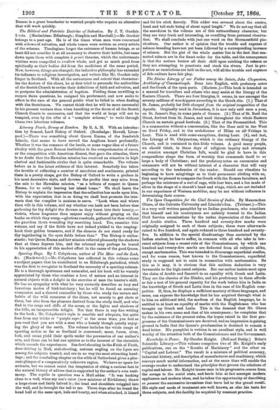 The Divine Liturgy of our Father among Me Saints, John

Chrysostom, Archbishop of Constantinople. Done into English, with prefatory notes and the Greek of the open parts. (Masters .)—This book is intended as a manual for travellers and others who may assist at the liturgy of the Eastern Church. There are four liturgies, it seems, in use amongst the seventy millions of worshippers according to the Greek rite. (I.) That of St. James, probably but little changed from the original composition of the Apostle. Originally used in Jerusalem, it is now only-said once a year, on St. James's Day, in some parts of Greece. (2.) That of St. Basil the Great, derived from St. James, and used throughout the whole Eastern Church on certain grand festivals. (3.) That of the Presanetified. This is a communion without a consecration, like the Mass said in the West on Good Friday, and in the archdiocese of Milan on all-Fridays in Lent. This is used with some exceptions, during Lent. (4), and last, the Liturgy of St. Chrysostom, which is the ordinary liturgy of the Church, and is contained in this little volume. A good many people, we should think, in these days of religions inquiry and attempts at reunion amongst Christian folk, would be glad to have in this compendious shape the form of worship that commands itself to so large a body of Christians; and the prefatory notes on ceremonies and ornaments will not be without interest of a character that will vary according to the tendencies of the reader. Should our ritualists be beginning to have misgivings as to their permanent abiding with us, they may be pleased to compare the Greek with the Roman furniture, and perhaps the existence of a sort of cage, with four bars, and a fan made of silver in the shape of a cherub's head and wings, which are not included in our experience of Western mobilier, may be not without influence in determining their course.