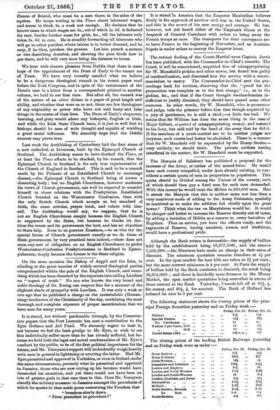 Page 3, 27 October 1866 — The revised finding of the Court-Martial upon Captain Jervis has.
Close

The revised finding of the Court-Martial upon Captain Jervis has.

been published, with the Commander-in-Chiefs remarks. The Court, it will be remembered, acquitted him -of misappropriating Sir W. Mansfield's pickles and other stores, but found him guilty of insubordination, and dismissed him the service with a recom- mendation to mercy. The Commander-in-Chief sent the pro- ceedings back for revision, observing that the " proof for the prosecution was complete as to the first charge," i.e., as to the pickles, &c., and that if the Court thought insubordination in- sufficient to justify dismissal, they should have passed some other sentence. In other words, Sir W. Mansfield, who is prosecutor and judge, tells the prisoner before him that though acquitted by a jury of gentlemen, he is still a thief ;—a little too bad. We notice that Sir William has done the same thing in the case of Major Gilbert, acquitted of misappropriating money, and restored to his duty, but still told by the head of the army that he did it. If the members of a court-martial are to be neither judges nor jurymen, such courts had better be abolished. There is a rumour that Sir W. Mansfield will be superseded by Sir Henry Storks,— very unlikely, we should think. The private soldiers having interfered in the matter, Sir W. Mansfield must be supported.