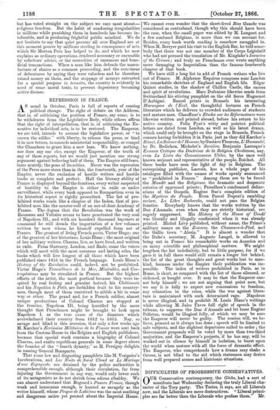 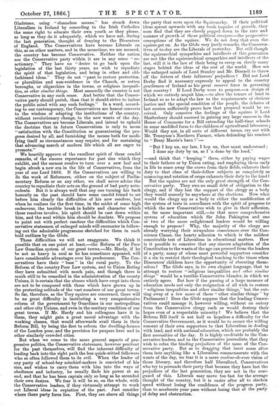 OUR Conservative contemporary, the Globe, had a sort of manifesto last Wednesday declaring the truly Liberal cha- racter of the Tory party. The Tories, it says, are all Liberals now, and the Liberals are mere destructives. " Liberal princi- ples are far better than the Liberals who profess them." Mr. Gladstone, using "shameless means," has struck down Liberalism in Ireland by conceding to the Irish Catholics the same right to educate their own youth as they please, as long as they do it adequately, which we have not, during the last generation, thought of denying to the Dissenters of England. The Conservatives have become Liberals on this, as on other matters, and in the meantime, we are assured, the country has become Conservative. Neither the nation nor the Conservative party within it are in any sense " re- actionary." They have no " desire to go back upon the legislation of the last thirty years, no wish to repudiate the spirit of that legislation, and bring in other and old- fashioned ideas." They do not "pant to restore protection, or pluralities and non-residence in the Church, or rotten boroughs, or oligarchies in the towns, or religious inequali- ties, or other similar things. Most assuredly the country is not Conservative in any such sense. And better that the Conser- vative party should perish, than that it should strive to imbue the public mind with any such feelings." In a word, accord- ing to our contemporary, the Conservatives are honest converts to the wisdom of adapting the institutions of the country, without revolutionary change, to the new wants of the day. The Conservatives are become Liberals, and intend to uphold the doctrine that in future Conservatism is only to mean " satisfaction with the Constitution as guaranteeing the pro- gress desired by all, and furnishing the means both for modi- fying itself as circumstances may require, and for sustaining that advancing march of modern life which all are eager to promote."

We heartily approve of the excellent spirit of these candid remarks, of the sincere repentance for past sins which they exhibit, and the earnest resolve to turn over a new leaf and begin afresh a new era in the life of Conservatives, from the year of our Lord 1866. If the Conservatives are willing to do the work of Reformers, either on the subject of Parlia- mentary Reform or on any other, we shall never advise the country to repudiate their acts on the ground of bad party ante- cedents. But it is always well that any one turning his back honestly on the past should have some candid friend to set before him clearly the difficulties of his new resolves, lest when he realizes for the first time, in the midst of some high endeavour, the terrible break in habits and character which these resolves involve, his spirit should be cast down within him, and the soul within him should be desolate. We propose to point out with perfect candour the difficulties which Con- servative statesmen of enlarged minds will encounter in follow- ing out the admirable programme sketched for them in such bold outlines by the Globe.

These difficulties we will not exaggerate. We think it possible that on one point at least,—the Reform of the Poor Law Guardian system of our great towns,—Mr. Hardy, if he be not as heavy in soul as he has sometimes appeared, will have considerable advantages over his predecessor. The Con- servatives have their " base " in the rural party. To the Reform of the country Poor Law system, and to Union Rating they have submitted with much pain, and though there is much still to be remedied in the administration of the county Unions, it is certain that the abuses which have crept into them are not to be compared with those which have grown up in the protecting solitude of the vast numbers of our great towns. So far, therefore, as the Tory squires are concerned, there will be no great difficulty in instituting a very comprehensive reform of the government by Guardians in our metropolitan and other city Unions, and even in the sanitary condition of our great towns. If Mr. Hardy and his colleagues have it in them, they might gain a great moral advantage with the working classes, that would afterwards avail them in their Reform Bill, by being the first to reform the dwelling-houses of the London poor, and the provision for paupers here and in other similarly crowded cities.

But when we come to the more general aspects of pro- gressive politics, the Conservative statesmen, however penitent for the past themselves, will find the inherent difficulty of leading back into the right path the less quick-witted followers who so often followed them to do evil. When the leader of any party of school-boy mischief-makers is convicted of his sins, and wishes to carry them with him into the ways of obedience and industry, he usually finds his power at an end, and that he has been captain only so long as he seconded their own desires. We fear it will be so, on the whole, with the Conservative leaders, if they virtuously attempt to work

out Liberal ideas in expiation of the past. Just consider where there party force lies. First, they are above all things the party that rests upon the Squirearchy. If their political ideas sprout upwards with any fresh impulse of growth, they soon find that they are closely pegged down to the rate and manner of growth of those political creepers—the progressive• conceptions of the squires. We do not deny that even the, squires get on. As the Globe very justly remarks, the Conserva- tives of to-day are the Liberals of yesterday. But still though the squirearchial sympathies and intellects of this generation are not like the squirearchical sympathies and intellects of the last, still it is the law of their being to creep on slowly many stages behind the ideas of the rest of the world. How are the enlarged minds of Lord Stanley and Mr. Disraeli to throw off the fetters of their followers' prejudices ? Did not Lord Derby find it necessary expressly to appeal to the country gentlemen of Ireland as his great reserve force in governing that country ? If Lord Derby were to propose,—a design of which we entirely acquit him,—to alter the tenure of land in Ireland so as to adapt the law to the requirements of obvious justice and the special condition of the people, the debates of last session sufficiently prove how that proposal would be re- ceived. Only conceive the feelings of the squires if Lord Shaftesbury should succeed in gaining any large success in the House of Commons for a Bill extending the half-time schools in some modified form to the children of agricultural labourers Would they not, in all sorts of different forms, cry out with Mr. Tennyson's Northern Farmer, when defending his conduct to " Bessy Marris's barn ?"—

" But I kep un, my lass, I kep un, thee must understond ; I done my duty by un, as I 'a done by the lond," —and think that "keeping " them, either by paying wages to their fathers or by Union rating, and employing them early in life to scare away the crows from their fields, exhausts their duty to that class of their-fellow subjects as completely as manuring and rotation of crops exhausts their duty to the land?

But the squires are not the only great strength of the Con- servative party. They owe no small debt of obligation to the clergy, and if they lost the support of the clergy as a body they would scarcely be anywhere at the elections. Now what would the clergy say as a body to either the modification of the system of tests in accordance with the spirit of progress to which the new Conservatives wish to give in their adhesion, or, far more important still,—to that more comprehensive system of education which Sir John Pakington and one or two of the more enlightened leaders would be willing enough to propose? Why, the majority of the clergy are already worrying their scrupulous consciences over the Con- science Clause, the hearty adhesion to which is the mildest conceivable test of Liberalism in educational matters. How is it possible to conceive that any sincere adaptation of the Constitution to the wants of the age can proceed from the leaders of a party, many of whose most powerful supporters consider it a sin to restrict their theological teaching to the times when Dissenters' children have the opportunity of absenting them- selves ? The Globe says, in its own elegant language, that to attempt to restore " religious inequalities and other similar things" would be a terrible Conservative blunder, in which we entirely agree. But how if the passing of a large measure of education needs not only the resignation of all wish to restore " religious inequalities and other similar things," but the cut- ting away of a few more of these " other similar things " by Parliament ? Does the Globe suppose that the leading Conser- vatives could manage it, however willing, without an outcry from the Conservative clergy such as would destroy their hopes even of a respectable minority ? We believe that the Reform Bill itself is not half so hopeless a difficulty for the Conservative Government, as it would be to secure the willing consent of their own supporters to that Liberalism in dealing with land, and with national education, which are probably the first necessities of the day. It is highly creditable to the Con- servative leaders, and to the Conservative journalists, that they wish to relax the binding prejudices of the mass of the Con- servative party. But as to dragging that inert mass after them into anything like a Liberalism commensurate with the wants of the day, we fear it is a mere couleur-de-rose vision of those literary, and therefore half liberalized, Conservatives who try to persuade their party that because they have lost the prejudices of the last generation, they are not in the rear- guard of this. Liberals may move too fast for the average thought of the country, but it is easier after all to slacken speed without losing the confidence of the progress party, than to accelerate your pace without losing that of the party of delay and obstruction.