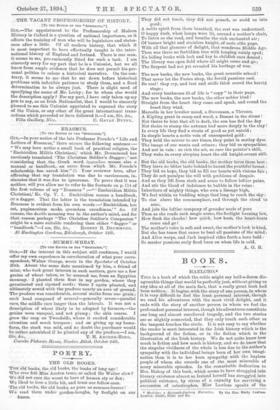 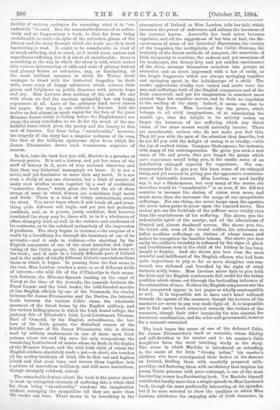 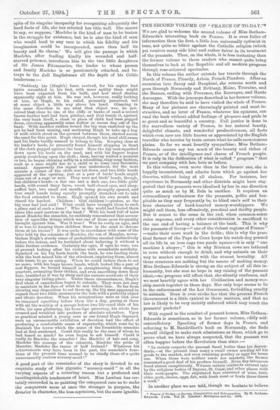 THrs is a book of which the critic might say half-a-dozen die- agreeable things that would be perfectly just, without giving us any idea at all of the main fact, that a really great book had been written. It begins with the story of one person, in whom it is very difficult to feel the least personal interest, though we read his adventures with the most vivid delight, and it ends with the story of another person in whom we feel the profoundest personal interest, though his adventures constitute one long and almost unrelieved tragedy, and the two stories are so slightly connected, that they only touch each other as the tangent touches the circle. It is not easy to say whether the reader is most interested in the Irish history which is the background of the fiction, or in the fiction which is the illustration of the Irish history. We do not quite know how much is fiction and how much is history, and we do know that the singular vividness of the whole is less due to the author's sympathy with the individual beings born of her own magi- nation than it is to her keen sympathy with the hapless people of whom she records one of the most miserable of many miserable episodes. In the remarkable dedication to Mrs. Bishop of this book, which seems to have struggled into literary existence almost as Ireland herself has struggled into political existence, by virtue of a capacity for surviving a succession of catastrophes, Miss Lawless speaks of the

futility of making apologies for narrating what it is "un- endurable" to read. But the remarkable feature of so melan- choly and so fragmentary a book, is that far from being unendurable to read,—in spite of the unbroken gloom of the history and the story through which she leads us,—it is most fascinating to read. It ought to be unendurable to read of so much suffering, and so much, as it would seem, useless and superfluous suffering, but it is not at all unendurable ; there is something in the way in which the story is told, which makes this curious interweaving of odds and ends of gloomy history and gloomy fiction as attractive, nay, as fascinating, as the most brilliant romance in which Sir Walter Scott manages to blend with the historical tragedies he deals with, some story of happy adventure which relieves their gloom and brightens up public disasters with private hope and joy. Miss Lawless does nothing of the sort. No one with whom we feel the smallest sympathy has any happy experience at all. Love of the ordinary kind never enters her pages. Her story is one without a heroine. And she makes us feel almost as much regret for the fate of the great Munster forest which is falling before the Englishman's axe when the story concludes, as we do for the wreck of the one faithful heart which gives the poetry and the beauty to this web of horrors. Far from being "unendurable," however, the tragedy of the story has a singular softness of its own, like that of the brilliant opalescent skies from which Sir James Fitzmamice draws such treacherous auguries of success.

In fact, take the book how you will, Medal.° is a paradox of literary genius. It is not a history, and yet has more of the stuff of history in it, more of true national character and fate, than any historical monograph we know. It is not a novel, and yet fascinates us more than any novel. It is not even a study of any one character, but a kind of mosaic of many such studies woven together by a sort of accidental "connective tissue," which gives the book the air of those scraps of moss in which flowers are sometimes kept moist and fresh. There is a kind of Celtic arbitrariness about the story. You never know where it will break off, and some- thing quite different will begin, and yet you feel perfectly confident, and, as it proves, justly confident, that however tesselated the story may be, there will be in it a wholeness of effect strangely Irish as well in the violence and crudeness of its contrasts, as in the subdued melancholy of the impression it produces. The story begins in violence,—the surprise of a castle by a hereditary foe through the treachery of one of its servants,—and it ends in violence,—the shooting by the English conquerers of one of the most harmless and capti- vating of the Celtic people, the same who gives his name to the book ; and it ends in a totally different part of Ireland and in the midst of totally different historic associations from those in which it began. In passing from the first scene to the last, Miss Lawless touches a score or so of different fields of interest,—the wild life of the O'Flahertys in their moun- tain fastness, the Hiberno-Spanish landing on the coast of Kerry at the time of the Armada, the quarrels between the Papal Legate and the Irish leader, the cold-blooded murder of two English officials by one of the Desmonds, the rivalry between Sir James Fitzmanrice and the Barkes, the internal feuds between the various Celtic clans, the wholesale massacre of the forest kerns by the English soldiery, and the various hiding-places in which the Irish found refuge, the jealousy felt of Elizabeth's Irish Lord-Lieutenant, Thomas, Earl of Ormond, by his English subordinates, the tor- ture of the Irish priests, the disturbed reason of the faithful follower of Sir James Fitzmaurice, who is driven mad by solitary confinement in one of those open Irish prisons where sea and sky were his only companions, the wandering brotherhood of monks whom he finds in the depths of the Munster Forest, and the wild Irish child of whom the English soldiers absolutely made a pet,—in short, she touches all the motley incidents of Irish life in that sad and hapless island and that cruel time, and weaves them together into a picture of marvellous brilliancy, and still more marvellous, though strangely subdued, misery.

The remarkable feature about the book is the power shown to work up variegated elements of suffering into a whole that far from being "unendurable," awakens the imagination without outraging the sympathies till they are more than the reader can bear. • There seems to be something in the

atmosphere of Ireland, as Miss Lawless tells her tale, which increases the power of endurance and softens the keenness of the external horror. Assuredly her book never becomes repulsive, and all the raggedness of her bits of fact, the (Ills- cursiveness of some of her historical digressions, the variety of the tragedies, the multiplicity of the Celtic illusions, the brutality of the Saxon methods of conquest, the monotone of Irish incapacity to combine, the sadness and yet sweetness of the landscapes, the dreary drip and yet sudden opalescence of the skies, arrange themselves somehow into groups as attractive and as much impressed with a law of unity, an the bright fragments which are always springing together and springing apart in the kaleidoscope of a child. The reader appreciates vividly how varied and acute were the sins and sufferings both of the English conquerors and of the Irish conquered, and yet his imagination is somehow more excited than his sensitive nerves, and he feels no repulsion to the reading of the story. Indeed, it seems one that he cannot lay down. Miss Lawless has the power, which belongs to all vivid imaginations, of so stimulating the mind's eye, that the delight in its activity makes us forget the keenness of the suffering which any direct vision of the same scenes would naturally involve. There are considerable writers who do not make you feel this. They fill you with the pain of the situation they describe, but do not fill you with the delight of seeing it so vividly,—with the joy of exalted vision. Compare Shakespeare, for instance, with many of his contemporaries. He gives you such a new sense of life and power, that you forget the pangs which mere experience would bring you, in the elastic sense of an indefinitely enlarged capacity for experience. His con- temporaries fail to give you this keen sense of an enlarged being, and yet succeed in giving you the oppressive conscious- nese of intolerable horrors. Miss Lawless, we need hardly say, is not a Shakespeare, but very many of the scenes she describes would be " unendurable " to us now, if she did not contrive to increase the elation of vision even more, and much more, than she increases the range of our sympathetic sufferings. For one thing, she never harps upon the agonies.; she never takes pains to press upon the exposed nerve. She makes you see the fortitude of the sufferer more vividly even than the exquisiteness of his Buffering. She shows you the indomitable spirit of the martyr, and all the alleviations of blunted and almost deadened nerves. She shows you, too, the better side even of the brutal soldier, his reluctance to inflict needless sufferings on victims of whose name and nature he recognises the familiar tokens. She shows you how easily the soldier's brutality is softened by the signs of pluck and trustfulness even in the child of the Irishry he has been taught to despise. And she shows you how even the most scornful and indifferent of the English officers, who had been quite impervious to pity so far as mere slaughter was con- cerned, was sickened and horrified by the sight of cruel tortures nobly borne. Miss Lawless never fails to give both the Irish and the English combatants full credit for the better qualities which shone out through the beclouding influence of the animosities of race. Neither the English conquerors nor the Irish conquered appear in her pages as wholly contemptible or evil. It is impossible not to have one's heart softened towards the agents of the massacre, though the horrors of the massacre are never in any way made light of. It is impossible not to find one's heart attracted towards the victims of the massacre, though their utter incapacity for wise counsel, for strenuous combination, and for sober self-government, is never for a moment concealed.

A good part of the remainder of the story is devoted to an exquisite study of this gigantic " nursery-maid " in all the varying aspects of a tottering reason but a profound and inextinguishable tenderness of heart. Miss Lawless has cer- tainly succeeded in so painting the conquered race as to make the conquerors seem at once the stronger in purpose, the drearier in character, the less capricious, but the more ignoble.