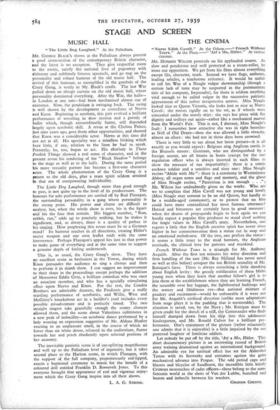 " Nurse Edith Cavell." At the Odeon.—" French Without Tears." At the Plaza.—" 'Arf a Mo, Hitler." At various cinemas.

MR. HERBERT WILCOX proceeds on his applauded course. As slow and ponderous and well protected as a steam-roller, he irons out opposition. We get from his films almost everything except life, character, truth. Instead we have flags, anthems, leading articles, a tombstone reticence. It would be unfair to call his Way of a Neagle vulgar showmanship (though a certain lack of taste may be suspected in the portmanteau title of his company, Imperadio), for there is seldom anything vital enough to be called vulgar in the successive patriotic appearances of this rather inexpressive actress. Miss Neagle looked nice as Queen Victoria, she looks just as nice as Nurse Cavell : she moves rigidly on to the set, as if wheels were concealed under the stately skirt: she says her piece with flat dignity and trolleys out again—rather like a mechanical marvel from the World's Fair. This is not, I daresay, Miss Neagle's fault : I remember how attractive she was in tight breeches as Nell of Old Drury—then she was allowed a little vivacity, almost an allure: she had not in those days been crowned.

exactly as you would expect : Belgians sing Anglican carols in the Brussels streets : Germans, who are distinguished by a foreign accent, are all brutes in boots (except for the one regulation officer who is always inserted in such films to show the measure of our impartiality): there is a comic cockney soldier and a sensitive and sissy one: Miss Neagle recites "Abide with Me ": there is a ceremony in Westminster Abbey, all organ notes and flags and memory, and the ghost of Miss Neagle recites, " Patriotism is not enough . . ." ; Mr. Wilcox has undoubtedly given us the works. Who are we to complain that Miss Cavell was not young and lovely (Miss Neagle may consent to be an old Queen, but hardly to be a middle-aged commoner), or to protest that no film could have more contradicted her most famous utterance? Hatred and bitterness are certainly here in good measure : when the drums of propaganda begin to beat again we can hardly expect a popular film producer to stand aloof seeking the tragic values in Miss Cavell's story. Nevertheless, one regrets a little that the English creative spirit has never risen higher in her commemoration than a statue cut in soap and an emotional melodrama. Of the two, one prefers the statue : it seems a little truer to the staid heroism, the Anglican rectitude, the clinical love for patients and mankind.

French Without Tears is a triumph for Mr. Anthony Asquith. After the first ten minutes his witty direction and firm handling of the cast (Mr. Ray Milland has never acted so well as this before) conquer the too British sexuality of Mr. Rattigan's farce. There is always something a little shocking about English levity : the greedy exhilaration of these blithe young men when they learn that another fellow's girl is to join them at the establishment where they are learning French, the scramble over her luggage, the lighthearted badinage and the watery and libidinous eye—that national mixture of prudery and excitement—would be unbearable if it were not for Mr. Asquith's civilised direction (unlike most adaptations from stage plays it is the padding that is memorable). The situation is saved, too, by the Navy ; Mr. Rattigan must be given credit for the sketch of a stiff, shy Commander who finds himself dumped down from his ship into this adolescent kindergarten, and Mr. Ronald Culver for a brilliant per- formance. One's enjoyment of the picture (rather reluctantly one admits that it is enjoyable) is a little impaired by the too punctual laughter of feminine addicts.

Let nobody be put off by the title, 'Arf a Mo, Hitler. This

short documentary picture is an interesting record of British army training dramatised against an international background. An admirable eye for satirical effect has set the Aldershot Tattoo with its fireworks and costumes against the grim mechanised advance into Prague. The odd period caps and blazers and bicycles of Sandhurst, the incredible little bristly Crimean moustaches of cadet officers—these belong to the same fantastic world as the shots of Van der Lubbe, hunched and beaten and imbecile between his warders.