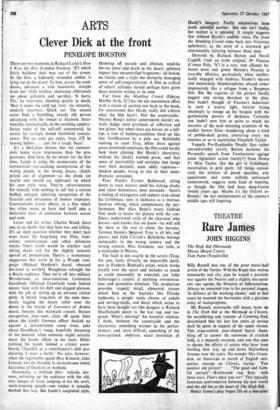 Clever Dick at the front ARTS

There are two moments in Richard Lester's How I Won the War (London Pavilion, 'X') which fairly bulldoze their way out of the screen. In the first, a hideously wounded soldier is lying out in the desert. To him, across the sand- dunes, advances a trim housewife, straight from her 1940s kitchen, chattering obliviously on about gallantry and sacrifice. It hurts, Flo,' he interrupts, bleeding quietly to death. `Run it under the cold tap, love,' she instantly, tenderly murmurs. Quick cut. The second scene finds a bumbling, tweedy old person advancing with the troops at Alamein. Inter- minably, mechanically, in the soothing country- butter voice of the soft-sell commercial, he recites his lovingly honed battlefield reminis- cence. 'Put on your gas capes, boys, it'll be raining bullets . . . just for a laugh, boys.'

It's a McLuhan dictum that the commer- cials make more impression than the pro- grammes. And here, by no means for the first time, Lester is using the mannerisms of the commercial—eye-catching incongruities of the wrong people in the wrong places, cliches jerked out of alignment—as the plank (or maYbe one should say tightrope) on which his own style rests. They're advertisements for himself, with nothing to sell but a certain baffled, enraged, admiring recognition of the fatuities and obtuseness of human responses. Unmistakable Lester effects, in a film which too often seems to have tied itself into a bedlamite knot of confusion between means and ends.

Lester and his writer, Charles Wood, leave one in no doubt that they hate war and killing. It's an open question whether they don't hate even more the bang-bang war films, four- colour reminiscences and other defensive myths. One's doubt would be whether such sitting ducks call for the slightly neurotic spread of ammunition. There's a momentary suggestion that we're in for a Waugh cam- paign (Michael Hordern's dazed, obsessed fire-eater is worthily Waughian) refought for a Beatle audience. Then we're off into military Wonderland, as class-conscious Lieutenant Goodbody (Michael Crawford) lands behind enemy lines with his daft and dogged platoon, with the job of setting up an advance cricket pitch. A heroic long-shot, of the men luna- tically lugging the heavy roller over the dunes to the strains of Lawrence of Arabia music, focuses that wayward conceit. Instant recognition; joke over; click; off again. Joke about the kindly German officer backed up against a concentration camp train; joke about Goodbody's troop, hopefully dreaming of the .moment when someone might actually shoot the booby officer in the back; Hitler rubbing his hands behind a cricket score- board; Churchill as a ventriloquist's doll pro- claiming 'I want a battle.' No joke, however, when the ragamuffin squad (Roy Kinnear, John Lennon, etc) die bloodily in monochrome tinted facsimiles of Dunkirk or Arnhem.

Notionally, a brilliant film : volatile, ner- vous, softening up the audience with the old, easy images of farce, jumping in for the swift, smile-freezing punch—one wishes it actually worked that way. But Lester's tangential style, throwing off parody and allusion, sand-in- the-tea jokes and death in the desert, splinters impact into uncontrolled fragments: all fission, no fusion, and a slight but distinctly damaging sense of self-congratulation. A film so critical of others' attitudes should perhaps have given more positive vetting to its own.

Far from the Madding Crowd (Odeon, Marble Arch, `U') has the not uncommon effect with a classic of sending one back to the book, for reassurance that Hardy really did achieve what the film hasn't. Not the countryside: Nicolas Roeg's colour camerawork doesn't en- tirely dodge mere prettiness of reflection and sun glitter, but when there are horses on a hill- top, a row of bathing-machines lined up like tiny fortifications by a pale sea, Bathsheba running to meet Troy, white dress against green downland emptiness, the film could hardly look more alluring. But Hardy's characters, without his thickly knotted prose, and that sense of inevitability and certainty that hangs over their destinies, seem oddly vaporous— shadow people, trying to rise to their melo- dramatic occasions.

Peter Finch's Farmer Boldwood, sitting down to roast mutton amid his ticking clocks and silent dalmatians, does persuade: there's a feeling of strangeness and sadness even about his farmhouse, seen in darkness as a morose, head-on oblong, which complements the per- formance. But Alan Bates's trusty Gabriel Oak tends to haunt the picture with the con- fident, understated smile of the character who knows—and knows that we know—he will still be there at the end to claim the heroine; Terence Stamp's Storgeant Troy is all bits and pieces; and Julie Christie's Bathsheba belongs ineluctably to the wrong century and the wrong context. Miss Everdene, one feels, is a weekender in Wessex.

The fault is not exactly in the actors (Troy, for one, looks virtually an impossible part); nor in Frederic Raphael's script, which works loyally over the novel and includes as much as could reasonably be expected; nor John Schlesinger's careful, if anything overmeticu- lous and protective direction. The production provides respect, detail, elemental storms which beat at the hayricks like Florida typhoons, a proper rustic chorus of yokels and serving-maids, and decor which seems to have been thought out (the designer is Richard MacDonald) down to the last cup and tea- spoon. What's missing? An essential relation, I think, between the countryside and the characters; something warmer in the perfor- mances; and, most difficult, something of the cross-grained, obdurate, exact insistence of

Hardy's imagery. Faulty adaptations have made splendid movies: this one isn't faulty, but neither is it splendid. It simply suggests that without Hardy's audible voice, Far from the Madding Crowd sinks back into Victorian upholstery, as the story of a wayward girl interminably loitering between three men.

Directed by Richard Burton and Nevill Coghill, from an OUDS original, Dr Faustus (Cameo Poly, 'X') is a rare, rum alliance be- tween town and gown. Burton's Faustus is irascibly effective, particularly when intellec- tually engaged with Andreas Teuber's shaven and melancholy Mephistopheles, played rather impressively like a refugee from a Bergman film. But the vagaries of the picture hardly suggest any strong devotion to the play. One hadn't thought of Faustus's behaviour in such a scurvy light, forever trying whiningly to renege on his bargain with the gentlemanly powers of darkness. Certainly one hadn't seen him as quite so much the ancestor of the mad mutating scientists of the seedier horror films—wandering about a kind of pebble-dash grotto, contriving every ten minutes or so to materialise Elizabeth Taylor.

Vaguely Pre-Raphaelite Deadly Sins rather uncomfortably cavort; Burton declaims the Persepolis speech from Tatnburlaine against some Agincourt action (surely?) from Henry V; Miss Taylor, like the girl in Goldfinger, materialises in gold paint. All things consid- ered, the mixture of posed speeches, arty apparitions and some wilfully unfocused camerawork, suggests some kind of timeslip, as though the film had been deep-frozen twenty years ago. Maybe it's the Oxford in- fluence: the last enchantments of the cinema's middle ages still lingering.