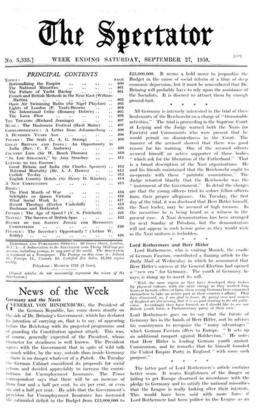 Page 1, 27 September 1930 — All Germany is intensely interested in the trial of three
Close

All Germany is intensely interested in the trial of three

lieutenants of the Reichswehr on a charge of " treasonable activities." . The trial is proceeding in the Supreme Court at Leipzig and the Judge warned both the Nazis (or Fascists) and Communists who were present that he would permit no disorderliness in the. Court. The manner of the accused showed that there was good reason for his warning. One of the accused officers avowed himself an active supporter, of those bodies " which ask for the liberation of the Fatherland." That is a broad description of the Nazi organizations. lie Mid his friends maintained that the Reichswehr ought to co-operate with these " patriotic associations." The Judge retorted bluntly that the Reichswehr was the .` instrument of the Government." In detail the charges are that the young officers tried to seduce fellow-officers from their proper allegiance. On Tuesday, the first day of the trial, it was-disclosed that Herr littler the Nazi leader, may be accused of high treason. In the meantime he is being heard as a witness in the present Case. A Nazi demonstration has been arranged for next Sunday at Potsdam, but the demonstrators will not appear in such heroic guise as they would with as the Nazi uniform is forbidden.