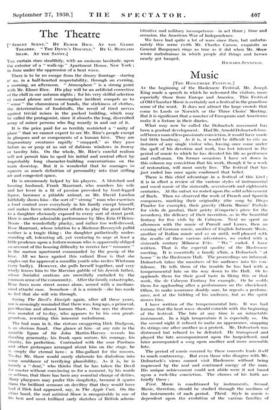 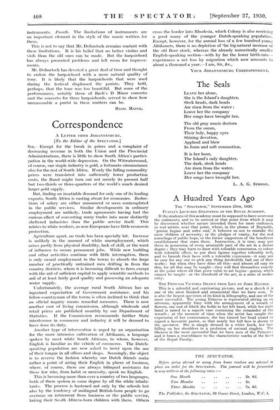 AT the beginning of the Haslemere Festival, Mr. Joseph King made a speech in which he welcomed the visitors, more especially those front Europe and America. This Festival of Old Chamber Music is certainly not a festival in the grandiose sense of the word. It does not attract the large crowds that come to Leeds or Norwich or the Three Choirs Meeting. But it is significant that a number of Europeans and Americans make it a fixture in their diaries.

What may now be called the Dolmetsch movement has been a gradual development. Had Mr. Arnold Dolmetsch him- self been a man of less passionate conviction, it would have made but little headway. As it is, it would be difficult to cite an instance of any single visitor who, having once conic under the spell of his devotion and work, has lost interest in the period of music to which lie has devoted his life as performer and craftsman. On former occasions I have set down in this column my conviction that his work, though it be a work of restoration, will most surely live. The festival that has just ended has once again confirmed that belief.

There is this chief advantage in a festival of this kind : it is in effect a review of the various styles of instrumental and vocal music of the sixteenth, seventeenth and eighteenth centuries. At the outset we rested upon the solid achievement of Bach. Then we observed the work of French and Spanish composers, marking their originality (the song by Diego Pisador for example), their gravity (NI:trill Marais Prelude for viola de gamba), their gaiety (Couperin's piece for the recorders), the delicacy of their invention, as in the beautiful fantasy for five viols by de Cabecon. Next we spent an afternoon with the music of Purcell and LIMPS, then an evening of German music, another of English Intimate Music, another of Italian music and so on until, well pleased with the results of these various adventures, we ended with a sixteenth century Milanese Fite. " We" ended, I have written. That is the especial quality of the Haslemere meeting. It is essentially a family affair, a Dolmetsch " at home " in the Haslemere Hall. The proceedings are informal. Dolmetsch takes the members of his audience into his con- fidence. He tells them of the trouble he has had with II temperamental lute on the way down to the Hall. Or he applauds them for their good taste in liking this or that work, the de Cabecon Fantasy for example. Or lie scolds them for applauding after a performance on the clavichord. Often, to make assurance doubly sure, he repeats a perform- ance, not at the bidding of his audience, but as the spirit moves him.

I have written of the temperamental lute. It was bad fortune that the heat wave should coincide with the beginning of the festival. The lute at any time is an intractable instrument. In a high temperature it is especially so. On the second night it refused to make an appearance, snapping its strings one after another as a protest. Mr. Dolmetsch was distressed but refused to be defeated. He transposed and played the • lute accompaniment upon the harpsichord, and later accompanied a song upon another and more amenable lute.

The period of music covered by these concerts lends itself to much controversy. But even those who disagree with Mr. Dolmetsch's views cannot visit Haslemere without being impressed by the zeal and continued energy of the inan. His unique achievement could not abide were it not based upon a rock-like conviction. The clauses of his faith arc briefly these : First. Music is conditioned by instruments. Second: Music, therefore, should be studied through the medium of the instruments of each period.. Third. Style in music . is dependent upon the evolution of the various families of

instruments. Fourth. The limitations of instruments are an important element in the style of the music written for them.

This is not to say that Mr. Dolmetsch-remains content with these limitations. It is his belief that no better violins and viols than the old ones can be made. But the harpsichord has always presented problems and left room for improve- ments.

Mr. Dolmetsch has devoted a great deal of time and thought to endow the harpsichord with a more natural quality of tone. It is likely that the harpsichords that were used during the festival displeased the purists. They held, perhaps, that the tone was too beautiful. But some of the performances, notably those of Bach's D Minor concerto and the concerto for three harpsichords, served to show how unreasonable a purist in these matters can be.