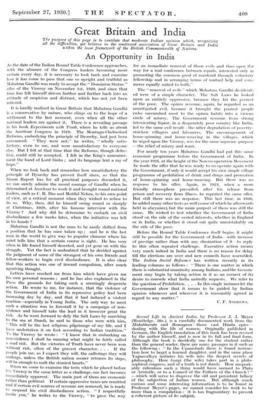 The purpose of this page is to ventilate that moderate Indian opinion which, recognizing all the difficulties, yet believes in the continued association of Great Britain and India within the loose framework of the British Commonwealth of Nations.

An Opportunity in India

As the data of the Indian Round Table Conference approaches, with the absence of the Congress leaders becoming more certain every day, it is necessary to look back and examine how it has come to pass that one so upright and truthful as Mahatma Gandhi was ready to accept the " Dominion Status " offer of the Viceroy on November 1st, 1929, and since that time has felt himself driven further and further back into an attitude of suspicion and distrust, which has not yet been relieved.

It is hardly realized in Great Britain that Mahatma Gandhi is a conservative by nature, who clings on to the hope of a settlement to the last moment, even when all the other national leaders are against it. There is a revealing passage in his book Experiments with Truth, where he tells us about the Amritsar Congress in 1919. The Montagu-Chelmsford Reforms, embodying the principle of Dyarchy, had just been announced. " They were not," be writes, " wholly satis- factory, even to me, and were unsatisfactory to everyone else. But I felt at that time that the Reforms, though defec- tive, could still be accepted. I felt in the King's announce- ment the band of Lord Sinha ; and its language lent a ray of hope."

When we look back and remember how unsatisfactory the principle of Dyarchy has proved itself since, so that the Simon Report has for all practical purposes discarded it, we can surely admire the moral courage of Gandhi when he determined at Amritsar to work it and brought round national leaders, such as C. R. Das and Motilal Nehru, to his own point of view, at a critical moment when they wished to refuse to do so. Why, then, did he himself swing round so sharply at Christmas, 1929, after his famous interview with the Viceroy ? And why did he determine to embark on civil disobedience a few weeks later, when the initiative was left in his hands ?

Mahatma Gandhi is not the man to be easily shifted from a position that he has once taken up ; and he is the last man in the world to give way to popular clamour where his mind tells him that a certain course is right. He has very often in life found himself deserted, and yet gone on with the struggle. Yet the fact is undoubted that he decided against the judgment of some of the strongest of his own friends and fellow-workers to begin civil disobedience. It is also clear that this action was one of inward compulsion, after much agonizing thought.

Letters have reached me from him which have given me his own personal reasons ; and he has also explained in the Press the grounds for taking such a seemingly desperate action. He wrote to me, for instance, that the violence of the Government of India in its repressive policy had been increasing day by day, and that it had induced a violent reaction—especially in Young India. The only way to meet such a situation was to forestall it by a campaign of non- violence and himself take the lead in it however great the risk. As he went forward to defy the Salt Laws by marching to the sea at Dandi, he said to those who were with him, This will be the last religious pilgrimage of my life, and I have undertaken it on foot according to Indian tradition." To the Viceroy he wrote : " I know that in embarking on non-violence I shall be running what might be fairly called a mad risk. But the victories of Truth have never been won without risk, often of the gravest character. . . . If the people join me, as I expect they will, the sufferings they will undergo, unless the British nation sooner retraces its steps, will be enough to melt the stoniest hearts."

When we come to examine the tests which he placed before the Viceroy in the same letter as a challenge, one fact becomes immediately apparent. The main part of them are economic rather than political. If certain oppressive taxes are remitted and if certain evil sources of revenue are removed, he is ready to suspend his civil disobedience action. " I respectfully invite you," he writes to the Viceroy, " to pave the way

for an immediate removal of those evils and thus open the way for a real conference between equals, interested only in promoting the common good of mankind through voluntary fellowship and in arranging terms of mutual help and com- merce equally suited to both."

The "removal of evils" which Mahatma Gandhi desiderat- ed were of a simple character. The Salt Laws he looked upon as entirely oppressive, because they hit the poorest of the poor. The opium revenue, again, he regarded as an unmitigated evil, because it brought the poorest people (who succumbed most to the opium habit) into a vicious circle of misery. The Government revenue from strong intoxicating liquor, in a desperately poor country like India, led to the same evil result—the utter degradation of poverty- stricken villagers and labourers. The encouragement of home-spinning and borne-weaving in the villages, which he urged upon the Viceroy, was for the same supreme purpose —the relief of misery and want.

For nearly ten years Mahatma Gandhi had put this same economic programme before the Government of India. In the year 1921, at the height of the Non-co-operation Movement 11e made the offer that lie was ready to co-operate again with the Government, if only it would accept his own simple village programme of prohibition of drink and drugs and prompt' of home-spinning and home-weaving. But there was no response to his offer. Again, in 1924, when a more friendly atmosphere prevailed, after his release from prison and recovery from illness, he repeated the same offer. But still there was no response. This lust time, in 1930, he added many other tests as well (sonic of which lie afterwards held in abeyance), but the main purport of them was still the same. He wished to test whether the Government of India stood on the side of the vested interests, whether in England or in India, or whether it stood out quite unmistakably on the side of the poor.

Before the Round Table Conference itself begins it might Still be possible for the Government of India--with increase of prestige rather than with any diminution of it—to reply to this often • repeated challenge. Executive action means very much indeed in India and there is no reason for delay till the elections are over and new councils have assembled. The Indian Social Reformer has written recently in its leading columns as follows : " There is one matter in which there is substantial una 'ty among Indians, and the Govern- ment may begin by taking action in it as an earnest of its desire to concede what India unitedly requests. We refer to the question of Prohibition. . . - In this single instance let the Government show that it means to be guided by Indian opinion whenever and wherever it is reasonably agreed in

regard to any matter." C. F. ANDREWS.