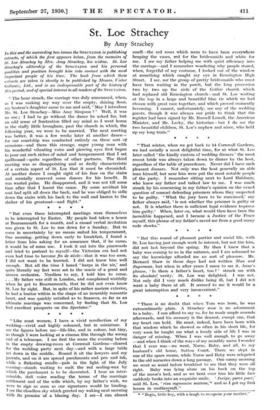 In this and the succeeding two issues the SPECTATOR is publishing extracts, of which the first appears below, from the memoirs of St. Loe Strachey by Mrs. Amy Strachey, his widow. St. Lee Strachey's editorship of the SPECTATOR and his personal qualities and position brought him into contact with the most important people of his time. The book from which these extracts are taken is shortly to be published by Messrs. Victor Gollancz, Ltd., and is an indispensable part of the history of this period, and of special interest to all readers of the SPECTATOR.

" The hour struck, the carriage was duly announced, when, as I was making my way over the empty, shining floor, my hostess's daughter came to me and said, May I introduce Mr. St. Lee Strachey—Miss Amy Simpson ? ' Well, it was no use ; I had to go without the dance he asked for, but an odd sense of frustration filled my mind as I went home in the stuffy little brougham, past the church in which, the following year, we were to be married. The next meeting was better, it was a few weeks later at another dance— for our courtship was conducted entirely on these sort of occasions—and there this strange, eager young man with his wonderful vibrating voice and piercing eyes first began to pour out such riches of mind and temperament that I sat spellbound—quite regardless of other partners. The third meeting was so disappointing and so drolly characteristic of a certain aspect of St. Loe that it must be chronicled. At another dance I caught sight of his face on the stairs and mentally reserved some dances for his benefit. It was wasted pains. He disappeared, and it was not till some time after that I learnt the cause. By some accident his coat had split all down the back, and he was obliged to sidle down the stairs with his back to the wall and hasten to the shelter of his greatcoat—and flight."

" But even these interrupted meetings were themselves to be interrupted by Easter. My people had taken a house at Bournemouth for a month, and a casual verbal invitation was given to St. Loe to run down for a Sunday. But to come in uncertainty by no means suited his temperament. One morning, getting down early to breakfast, I found a letter from him asking for an assurance that, if he came, it would be of some use. I took it out into the pinewoods and tried to pretend to myself—the Victorian era had not even had time to become fin de siècle—that it was too soon. I did not want to be hurried. I did not know him well enough. But all the time I heard ' harps in the air,' and quite literally my feet were set to the music of a great and unseen orchestra. Needless to say, I told him to come.

• . . My father was still in London, and complained wistfully when he got to Bournemouth, that he did not even know St. Loe by sight. But, in spite of his rather austere exterior, he had a traitor within in the shape of an incurably romantic heart, and was quickly satisfied as to finances, as far as an ultimate marriage was concerned, by finding that St. Loe had excellent prospects on the Spectator."

"Like most women, I have a vivid recollection of my wedding—vivid and highly coloured, but in miniature. I WC the figures before me--life-like, and in colour, but tiny, as though I were looking at a cinema film through the wrong end of a telescope. I see first the scene the evening before in the empty drawing-room at Cornwall Gardens—cleared for the wedding party next day—and with a large table set down in the middle. Round it sit the lawyers and my parents, and on it are spread parchments and pen and ink, 'Mille a flickering candle—pale in the light of the July evening—stands waiting to melt the red sealing-wax by which the parchment is to be decorated. I hear an inter- minable, dull voice reading the terms of the marriage settlement and of the wills which, by my father's wish, we were to sign as soon as our signatures would be binding. I see the cloudless sky which greeted my waking next morning with its promise of a blazing day. I see—I can almost smel1L-the red roses which seem to have been everywhere heaping the vases, red for the bridesmaids and white for me. I see my father helping me with quiet efficiency into the carriage—and I remember wondering why people stared, when, forgetful of my costume, I looked out of the window at something which caught my eye in Kensington High Street. I see, not the group of pretty bridesmaids who must have been waiting in the porch, but the long procession two by two up the aisle of the Gothic church which had replaced old Kensington church—and St. Lee waiting at the top in a large and beautiful blue tie which we had chosen with great care together, and which proved eminently becoming. I cannot, unfortunately, see any of the wedding guests, though it was always our pride to think that the register had been signed by Mr. Russell Lowell, the American Minister, and Mr. Lecky, the historian—but I do sec the two beautiful children, St. Loe's nephew and niece, who held up my long train."

" That winter, when we got back to 14 Cornwall Gardens, we had socially a most delightful time, for at what St. Lea later called ' the kindly custom of wedding dinners' the most recent bride was always taken down to dinner by the host, regardless of the table of precedence. Never did I have such pleasant dinners. Not only was the host generally an able man himself, but near him were put the most notable people of the party. I remember sitting next to Lord Halsbury, who knew my father and talked law to me. I was much struck by his concurring in my father's opinion on the vexed question of counsel defending prisoners whom they suspected to be guilty. What the jury have to be convinced,' my, father always said, is not whether the prisoner is guilty or not. It is whether there is sufficient legal evidence to prove him guilty.' When, later on, what would then have been the incredible happened, and I became a Justice of the Peace myself, this phrase of my father's saved me from a good many rude shocks."

" But this round of pleasant parties and social life, with St. Loe having just enough work to interest, but not tire him, did not last beyond the spring. By then I knew that a baby was coming to us in the autumn, and I am ashamed to say the knowledge afforded me no sort of pleasure. Mr. Bernard Shaw in those days had not written Man and Superman, but when in after years I came to see it, Anne's phrase, ' Is there a father's heart, too ? ' struck me with its absolute, verity.' St. Loe was delighted. I was not. Not only did I very much dislike being ill, but I did not want a baby there at all. It seemed to me it would be a great interruption and very inconvenient."

"There is no doubt that when Torn was born, he was extraordinarily plain. A Strachey nose is no adornment to a baby. I can afford to say so, for he made ample amends afterwards, and his memory is the dearest, except one, that my heart can hold. He must, indeed, have been born with that wisdom which he showed so often in his short life, for very soon he taught me what a lovely side of life I was in danger of missing. When I was well enough to go away —and when I think of the ways of my monthly nurse I wonder that I ever was—we went, Nurse, Baby, and all, to my husband's old home, Sutton Court. There we slept in one of the spare rooms, while Nurse and Baby were relegated to the old nurseries down a long passage. One sunny morning we went as usual before breakfast to see that they were all right. Baby was lying alone on his back on the top of the nurse's bed, and as we bent over him his little face suddenly broke into an exquisite smile. ' Incipe, puree pucr,' said St. Loe, risu cognoscere matrern,'* and so I got my first lesson in mothereraft."

• " Begin, little boy, with a laugh to recognise your mother."