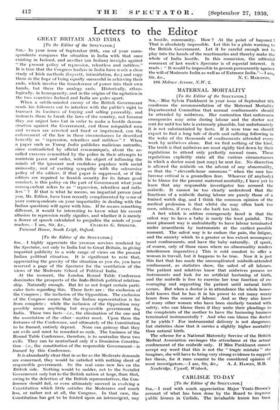 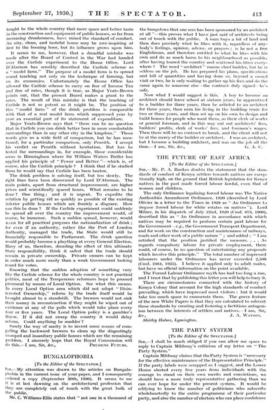 [To the Editor of the SPECTATOR.] SIR,—I relict with much appreciation Major "Yeats-Brown's account of what has been done by the Board to improve public &uses in Callisle. The invaluable lesson has been

taught to the whole country that more space and better taste in the construction and equipment of public houses, so far from increasing drunkenness, have raised the standard of conduct.

An airy, clean, and tasteful house may be awe-inspiring at first to the boozing boor, but its influence grows upon him. It seems to me, however, that a dreadful mistake was made after the Board of Control in the War had handed over the Carlisle experiment to the Horne Office. Lord D'Abernon has sensibly described the Carlisle scheme as a " model farm." The purpose of a model farm is to spread sound teaching not only on the technique of farming, but on its economics. Unfortunately the Horne Office has allowed the Carlisle scheme to carry on free of Income Tax and free of rates, though it is true, as Major Yeats-Brown points out, that the present Board makes a grant to the rates. The result of this mistake is that the teaching of Carlisle is not so potent as it might be. The position of this " model farm " of the drink problem is comparable with that of a real model farm which suppressed year by year an essential part of its statement of expenditure.

Major Yeats-Brown says that " there can be no question that in Carlisle you can drink better beer in more comfortable surroundings than in any other city in the kingdom." Those words give us a wide field of comparison, but he has men- tioned, for a particular comparison, only Penrith. I accept his verdict on Penrith without hesitation. But has he tested the surroundings in, for example, those considerable areas in Birmingham where Sir William Waters Butler has applied his principle of " Fewer and Better "—which is, of course, also the Carlisle principle ? I think that if he studied them he would say that Carlisle has been beaten.

The drink problem is solving itself, but too slowly. The right lines have been discovered by Lord D'Abernon. The main points, apart from structural improvement, are higher prices and scientifically spaced hours. What remains to be done ? One thing ; and it is urgent. To expedite the solution by getting rid as quickly as possible of the existing inferior public houses which are frankly a disgrace. How can this be done ? If the Carlisle experiment could suddenly be spread all over the country the improvement would, of course, be immense. Such a sudden spread, however, would mean for all practical purposes the nationalization of drink ; for even if an authority, rather like the Port of London Authority, managed the trade, the State would still be financially responsible to Parliament. The drink question would probably become a plaything at every General Election. Many of us, therefore, dreading the effect of this ultimate State responsibility, think it safest that the trade should remain in private ownership. Private owners can be kept in order much more easily than a weak Government looking round for votes.

Knowing that the sudden adoption of something very like the Carlisle scheme for the whole country is not practical politics, most of the Temperance reformers hope to proceed piecemeal by means of Local Option. See what this means. In every Local Option area which did not adopt " Disin- terested Ownership," reform by the trade itself would be brought almost to a standstill. The brewers would not sink their money in reconstruction if they might be wiped out of existence at any of the polls which would take place every four or five years. The Local Option policy is a gambler's throw. If it did not sweep the country it would delay reform. Could anything be madder ?

Surely the way of sanity is to invent some means of com- pelling the backward brewers to clean up the disgustingly cramped and insanitary public houses which are the remaining Problem. I sincerely hope that the Royal Commission will