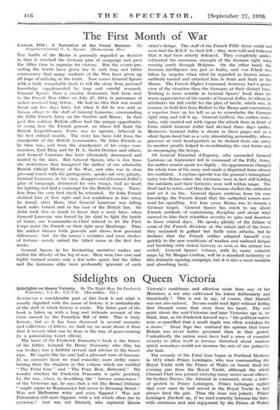 The First Month of War

Tun battle of the Marne is generally regarded as decisive in that it wrecked the German plan of campaign and gave the Allies time to organize for victory. But the events pre- ceding the battle have given rise to such long and bitter controversy that many students of the War have given up all hope of arriving at the truth. Now comes General Spears with a truly remarkable book to tell the story from personal knowledge supplemented by long and carefid research. General Spears, then a cavalry lieutenant, had been sent to the French War Office on July 27, 1914, in pursuance of orders received long before. He had no idea that war would break out five days later, but when it did he was sent as liaison officer to the staff of General Lanrezac, commanding the Fifth French Army on the Sambre and Meuse. In that post this solitary British officer had the unique opportunity of seeing how the French general, on whose left flank the British Expeditionary Force was to operate, behaved in the first critical month. The story has been told from the standpoint of the British Commander, Sir John French, as he then was, and from the standpoints of his corps com- manders, Earl Haig and Sir H. L. Smith-Dorrien and others, and General Lanrezac has been alternately denounced and lauded to the skies. But General Spears, who is free from the restrictions that hampered the author of our admirable British Official History of the War, and who was in close personal touch with the protagonists, speaks out very plainly. General Lanrezac, in his view, disapproved of General Joffre's plan of campaign, distrusted his own troops, had no heart for fighting and had a contempt for the British Army. There- fore from the very first check he retreated. Sir John French disliked him at first sight and lost confidence in him when he found, after Mons, that General Lanrczac was falling back miles behind and to the east of the British line. Sir John took this so much to heart that a week later, when General Lanrezac was forced by his chief to fight the battle of Guise, our Commander-in-Chief refused to let the First Corps assist the French on their right near Maubeuge. Thus the author blames both generals and shows how personal differences—but for the enemy's mistakes and some strokes of fortune—nearly ruined the Allied cause in the first few weeks.

' General Spears in his fascinating narrative makes one realize the density of the fog of war. Here were two vast and highly trained armies only a few miles apart, but the Allies and the Germans alike were profoundly ignorant of each

other's doings. The staff of the French Fifth Army could not even find the B.E.F. to their left ; they were told and believed that it had been utterly defeated. They completely under- estimated the enormous strength of the German right wing coming south through Belgium. On the other hand, the German intelligence was just as faulty, and von Muck was taken by surprise when what he regarded as beaten armies suddenly turned and attacked him in front and flank at the Marne. The French Higher Command, however, had a juster view of the situation than the Germans at their distant base. Nothing is more notable in General Spears' book than his wann appreciation of the merits of General Joffre, to whom he attributes the full credit for the plan of battle, which was, in essence, to hold fast from Belfort to the Marne and concentrate a superior force on his left so as to overwhelm the German right wing and roll it up. General Gallieni, the author main- tains, only carried out with vigour the attack from in front of Paris which General Joffre had devised three days earlier. Moreover, General Joffre is shown in these pages not as a silent figure-head but as a very stimulating personality, whose presence at each headquarters as he dashed from one army to another greatly helped in co-ordinating the vast forces and in encouraging the troops.

Of General Franchet d'Esperey, who succeeded General Lanrezac on September 3rd in command of the Fifty Army, the author cannot speak too highly ; his appointment changed the whole tone of the army and made a dispirited force almost too confident. A curious episode was the general's triumphant entry into Reims when the Germans were in fact still holding the outskirts and their batteries were well within range. The Staff had to retire, and then the Germans shelled the cathedral and set it on fire. General Spears confirms from his own knowledge the French denial that the cathedral towers were used for signalling. For four years Reims was to remain a German target. General Spears has much to say about French methods of maintaining discipline and about what seemed to him their relentless severity to spies and deserters in those critical days. He speaks plainly of the failure of some of the French divisions at the outset and of the losses they sustained in gallant but futile mass attacks, but he declares that the French soldier adapted himself very quickly to the new conditions of warfare and endured fatigue and hardship with stoical bravery as soon as the retreat was ended. General Spears' volume, with its many valuable maps by Sir Morgan Crofton, will be a standard authority on this dramatic opening campaign, but it is also a most readable and absorbing book.