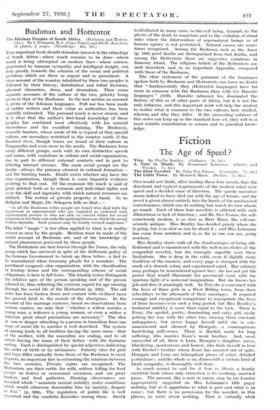 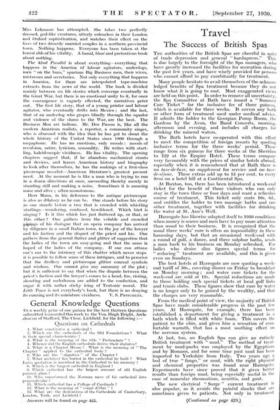 The Age of Speed ?

A Note in Music. By Rosamund Lehmann. (Chatto and Hindus. is. Gel.)

ONEwould not think, after reading these four novels, that the dominant and typical requirements of the modern mind were speed and a decided sense of direction. The speedy narrative seems indeed to have died out with the age of leisure, and the novel is given almost entirely into the hands of the mechanized consciousness, which can do nothing but watch its own wheels go round. Each of these four novelists is afflicted with such dilatoriness or lack of direction ; and Mr. Dos l'assos, the self- consciously modern, is as slow as Herr Mann, the self-con- sciously antique. Miss Bentley has decided grimly where she is going, but is as slow as can be about it ; and Miss Lehmann has come from nowhere and is, as far as one can see, going nowhere.

Miss Bentley starts with all the disadvantages of being old- fashioned and is encuinbered with the well-wont cliches of the congenital novelist, but she triumphs superbly over these limitations. She is deep in the solid, even if slightly rusty tradition of the masters, and every page is stamped with the mark of a shrewd, sober, and experienced mind. Her sobriety may, perhaps, be remembered against her: she has not yet the power that would illuminate her provincial scene with the spacious light of a universal imagination. But she knows her job and does it amazingly well. In Trio she is concerned with the lives of three girls in a West Riding town, from their schooldays to the aftermath of their marriages. It required courage and exceptional competence to manipulate the lives of three heroines -over such a long period, but Miss Bentley's technical subtlety is more than equal to the task. There is Esme, the spoiled, pretty, dominating and catty girl, easily getting her way with the other two, causing them constant unhappiness, but never happy herself until she is out- manoeuvred and silenced by Howgate, a contemptuous hard-living mill-owner. There is Rachel, made for long suffering, who marries Esnies weak brother. And, most successful of all, there is Lena, Ilowgates daughter, naive, blundering, spontaneous and honest, who finds herself in love with Rachel's brother whom Esrne has married out of spite. Howgate and Lena are triumphant pieces of sober, detailed portraiture ; and the whole serne, drawn with a curious kind of bleak sympathy, is thoroughly well done.

As much cannot be said for A Note in Music, a faintly snobbish book whose only attraction is its soothing, marbled prose. The present, like a note in music, may be (as Landor appropriately suggested on Miss Lehmann's title page) nothing, but as it appertains to what is past and what is to come ; but there is no permission for the novelist, in this phrase, to write about. -nothing. That is virtually ,what

Miss Lehmann has attempted. She takes two perfectly dressed, god-like creatures, utterly colourless in their London and Oxford sophistication, and watches their effect on the lives of two drearily married couples in a northern provincial town. Nothing happens. Everyone has been taken at the lowest ebb of his vitality. A banal, blase and pretentious book about nothing.

The 42nd Parallel is about everything—everything that happens in the America of labour agitators, underdogs, men " on the bum," spurious Big Business men, their wives, mistresses and secretaries. Not only everything that happens in America, for there arc interpolated tape-machine extracts from the news of the world. The book is divided mainly between six life stories which converge eventually in the Great War, but there is no emotional unity to it, for once the convergence is vaguely effected, the narratives peter out. The first life story, that of a young printer and labour agitator, who eventually drifts into Mexico ; and the last, that of an underdog who gropes blindly through the squalor and violence of the slums to the War, are the best. The Business Men are tedious. Mr. Dos Passos is, like all the modern American realists, a reporter, a community singer, who is obsessed with the idea that he has got to shout the whole history of the United States since 1000 through a megaphone. He has no emotions, only moods : moods of revulsion, satire, lyricism, sensuality. He writes with start- ling, kaleidoscopic vividness. He has vitality. The opening chapters suggest that, if he abandons mechanical stunts and devices, and leaves American history and biography to look after themselves, lie has the makings of a first-class picaresque novelist—American literature's greatest present need. At the moment he is like a man who is trying to run in a dozen directions at once, succeeding thereby merely in standing still and making a noise. Sometimes it is amusing noise and alive ; often monotonous.

Herr Mann, in his deference to the antique picturesque is also as dilatory as he can be. One stands before his story as one stands before a tree that is crowded with whistling 'starlings—wondering, confused, bewildered. Which bird is singing ? Is it this which has just fluttered up, or that, or this other ? One gathers from the voluble and crowded :pipings of his dialogue that an opera company has arrived by diligence in a small Italian town, to the joy of the lawyer and his faction and the disgust of the priest and his. One gathers from the general flutter and glitter of suggestion that the ladies of the town are easy-going and that the same is hoped of the ladies of the company. If one can attune one's ear to the intricacy of this chatter which never stops it is possible to follow some of these intrigues, and to perceive that the drollery and picturesque glitter conceal symbols and wisdom. One cannot give any summary of the plot ; but it is sufficient to say that when the dispute between the priest's faction and the lawyer's comes to a head, fire, rioting, shouting and melodrama are added to the confection, and sugar it with rather sticky icing of Teutonic moral. The Little Town is not everybody's book, but there is no denying its cunning and its miniature vividness. V. S. PRITCHETT.