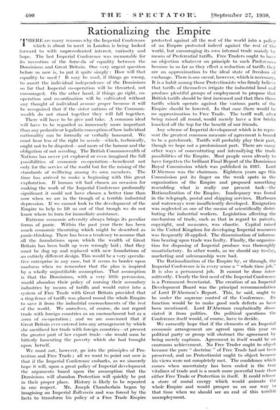 ?THERE arc many reasons why the Imperial Conference which is about to meet in London is being looked forward to with unprecedented interest, curiosity and hope. The last Imperial Conference was memorable for its invention of the formula of equality between the Dominions and Great Britain. One very urgent question before us now is, to put it quite simply : How will that equality be used ? It may he used, if things go wrong, to assert the individual independence of the Dominions so far that Imperial co-operation will be thwarted, not encouraged. On the other hand, if things go right, co- operation and co-ordination will he cultivated without any thought of individual armour proprc because it will he recognized that if the sister nations of the Common7 wealth do not stand together they will fall together. There will have to be give and take. A common ideal will have to be regarded as immensely more important han any pedantic or legalistic conception of how individual nationality can be formally or verbally honoured. We must hear less of the right to secede—which, technically, ought not to be disputed—and more of the honour and the obligation of not seceding. The British Commonwealth of Nations has never yet explored or even imagined the full possibilities of econothic co-operation—beneficent not only for the service of the world but for the raising of the standards of wellbeing among its own members. The time has arrived to make a beginning with this great exploration. If human wit had chosen an occasion. for making the work of the Imperial Conference profoundly significant it could not have chosen a better time than now when we are in the trough of a terrible industrial depression. If we cannot look to the development of the Empire to help to lift us out of that trough we do not know where to turn for immediate assistance.

Extreme economic adversity always brings its peculiar forms of panic. Within the past year there has been much economic theorizing which might be described as panic-thinking. There has been a tendency to assume that all the foundations upon which the wealth of Great Britain has been built up were wrongly laid ; that they must be dug up and replaced with new foundations' of an entirely different design. This would be a very specula- tive enterprise in any case, but it seems to border upon madness when we remember that the plan is inspired by a wholly unjustifiable assumption. That assumption is that the Dominions, with a very little persbasion, would abandon their policy of nursing their secondary industries by means of tariffs and would enter into a system of Free Trade with Great Britain provided that a ring-fence of tariffs was placed round the whole Empire to save it from the industrial encroachments of the rest of the world. We ourselves, of course, do not- regard trade with foreign countries as an encroachment but as a iorm of co-operation ; and- we are convinced that if Great Britain ever entered into any arrangement by which she sacrificed her trade with foreign countries—at present the greater part of her export trade—she would soon be bitterly lamenting the poverty which she had brought upon herself.

• We must not, however, go into the principles of Pro- tection and Free Trade ; all we want to point out now is that if the Imperial Conference embarks, as we sincerely hope it will, upon a great policy of Imperial development the arguments based upon the assumption that the Dominions will abandon Protection will quickly be .put in their proper place. History is likely to be repeated in one respect. Mr. Joseph Chamberlain began by imagining an- Imperial Zollverein and was forced by the facts to transform his policy of a Free Trade Empire

protected against all the rest. of the world into a policy of an Empire Protected. indeed againit the rest of the world, but encouraging its own internal trade mainly by means of Preferential tariffs. Free Traders ought to have no objection whatever on principle to such Preferences becaUse in so far as they effect a redUction of tariffs they are an approximation to the ideal state of freedom of exchange. There is one caveat, however, which is neeassary. It is a habit among those Protectionists who firmly believe that tariffs of themselves irrigate the industrial land and produce plentiful groups of employment to propose that British tariffs should be first increased and that then those tariffs which operate against the various parts of the Empire should be lowered. In that case there would be no approximation to Free Trade. The tariff wall, after being raised all round, would merely have a few bricks knocked off the top for the benefit of our friends.

Any scheme of Imperial development which is to repre- sent the greatest common measure of agreement is hound to he a patchwork. Tariffs will probably play their part, though we hope not a predothinant part. There arc many other ways of concentrating and intensifying the trade possibilities of the Empire. Most people seem already to have forgotten the brilliant Final Report of the Dominions Royal Commission which was published in 1917. Lord D'Ab'ernon was the chairman. Eighteen years ago this Commission put its finger on the weak spots in the organization of the Empire and proposed something resembling what is really our present task—the Rationalization of the Empire. Inadequacy was found in the telegraph, postal and shipping services. Harbours and waterways were insufficiently developed. Emigration was neglected as one of the means of scientifically distri- buting the industrial workers. Legislation affecting the mechanism of trade, such as that in regard to patents, copyright, and measures, was chaotic. Capital raised in the United Kingdom for developing Imperial resources was frequently ill-applied. The dissemination of informa- tion bearing upon trade was faulty. Finally, the organiza- tion for disposing of Imperial produce was thoroughly Unsatisfactory. In other words, as we should say to-day, marketing and 'salesmanship were bad.

The Rationalization of the Empire by, or through, the Imperial Conference is in every sense a " whole time job.". It is also a permanent job. It cannot be done inter- mittently. Clearly the first need of the Imperial Conference is a Permanent Secretariat. The creation of an Imperial Development Board was the principal recommendation of Lord D'Abernon's Report. This, he said, ought to be under the supreme control of the Conference. Its function would be to make good such defects as have been mentioned. Lord D'Abernon emphatically disso- ciated it from politics. On political questions the Conference itself would, of course, have to decide.

We earnestly hope that if the elements of an Imperial economic arrangement arc agreed upon this year no political party or group will obstruct the agreement by being merely captious. Agreement in itself would be an enormous achievement. No Free Trader ought to object because the pure " doctrine " of Free Trade had not been preserved, and no Protectionist ought to object because his views were not completely met. The confidence which comes when uncertainty has been ended is the true vitalizer of trade and is a much more powerful tonic than either Free Trade or Protection in itself. It could release a store of moral energy which would • animate the whole Empire and would prosper us on our ,way to that time when we should see an end of this terrible .unemployment.