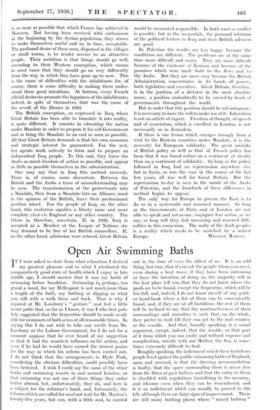 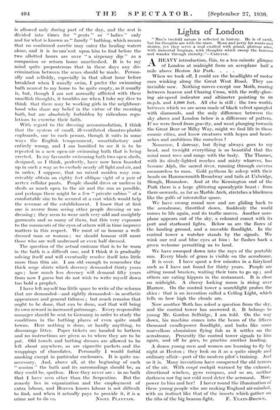 IF I were asked to state from what relaxation I derived

my greatest pleasure and to what I attributed the comparatively good state of health whirls I enjoy in late middle age, I should answer that it was my habit of swimming before breakfast. Swimming is, perhaps, too grand a word, for my Hellespont is not much more than a length of the bath, say bathing or dipping or what you will with a walk there and back. That is why I rejoiced at Mr. Lansbury's " gesture " and feel a little secret pride that, so far as I know, it was I who first pub- licly suggested that the Serpentine should be made avail- able for swimmers of both sexes at all reasonable times. In saying this I do not wish to take any credit from Mr. Lansbury or the Labour Government, for I do hot for a moment suppose that he ever heard of my suggestion or that it had the remotest influence on his action, and even if he had he would have earned the utmost 'praise for the way in which his reform has been carried out. I do not think that the arrangements in Hyde Park, considering the obvious difficulties, could possibly have been bettered. I wish I could say the same of the other baths and swimming resorts in and around London, or that swimming was not one of those things they order better abroad, but, unfortunately, they do, and here is a subject fOr the reformer's hand, and; fortunately; the reforms which- are called for need not Wait for Mr. Maxton's twenty-five Years, bid can, with -a little zeal, be carried out in the time of even the oldest of us. It is an odd thing, but true, that if you ask the people whom you meet, even during a heat wave, if they have been swimming or have the intention of doing so, the majority will in the first place tell you that they do not know where the pools are to be found, except the Serpentine, which will be too full, and, indeed, I do not know myself of any guide or hand-book where a list of them can be conveniently found, and, if they are at all fastidious, the rest of -Omit will be inclined to say that the unattractiveness of their surroundings and amenities is such that, on the whole, they prefer to wait till they can get to the real country or the seaside. And that, broadly speaking, is a sound argument, except, indeed, that the seaside, or that part Of it from which you can easily and without expense and complication, wrestle with our Mother, the Sea, is some- times extremely difficult to find.

• Roughly speaking, the indictment which these fastid ions people level against the public swimming baths of England, open and coVered, is that the dressing accommodation is faulty, that the space surrounding them is never free from the litter of past bathers and that the entry to them is shackled with regulations tantalizing to the memory, and irksome even when they can be remembered, and it is an indictment which can usually he proved to the hilt, although there are faint signs of improvement. There are still many bathing places where " mixed bathing "

is allowed only during part of the day, and the rest is divided into times for " gents " or " ladies " - only and for what is known as " family " bathing, which means that no confirmed ascetic may enter the healing waters alone, and it is intum'3ent upon him to find before the two allotted hours are over " a sixpenny dip " as a companion or return home unrefreshed. It is to my mind quite preposterous that in these days any dis- crimination between the sexes should be made. Person- ally and selfishly, especially in that silent hour before breakfast when I usually swim, I prefer -the swimming bath nearest to my home to be quite empty, as it usually is, but, though I am not normally afflicted with these unselfish thoughts, it troubles me when I take my dive to think that there may be working girls in the neighbour- hood who share my belief in the virtue of the morning bath, but arc absolutely forbidden by ridiculous regu, lations to exercise their faith.

- With regard to the dressing accommodation, I think that the system of small, ill-ventilated claustro-phobic cupboards, one to each person, though it suits in some ways the English temperament, unsatisfactory and entirely wrong, and I am horrified to see it is to be repeated in a new open-air swimming bath that is being erected. In my favourite swimming bath two open sheds, designed, as I think, perfectly, have now been boarded up in such a way as to exclude nearly all light and air, and in order, I suppose, that no mixed maiden may con- ceivably obtain an eighty feet oblique sight of a pair of aertex cellular pants. People should dress or undress in sheds as much open to the air and the sun as possible, and perhaps there might be a few " private cabins " of a comfortable size to be secured at a cost which would help the revenue of the establishment. I know that at first one is averse from seeing other people dressing or un- dressing ; they seem to wear such very odd and unsightly garments and so many of them, but this very exposure to the comments of the eyes of others will in time improve matters in this respect. We most of us honour a well- dressed man or woman ; we should honour still more those who are well undressed or even half dressed.

The question of the actual costume that is to be worn " in the bath is a difficult one, and I think it is gradually solving itself and will eventually resolve itself into little more than thin air. I am old enough to remember the thick serge shirts which decency demanded thirty years ago ; how much less decency will demand fifty years from now I guess but do not wish to write myself down too bold a prophet.

I have left myself too little space to write of the reforms that are demanded—and rightly demanded—in aesthetic appearance and general tidiness ; but much remains that ought to be done, that can be done, and -that will bring its own reward in increased patronage. Every responsible manager should be sent to Germany in order to study the conditions in the bathing places of even quite small towns. Here nothing is done, or hardly anything, to discourage litter. Paper tickets are handed to bathers and no instructions arc given as to where they are to be put. Old towels and bathing dresses are allowed to be left about anywhere, as are cigarette packets and the wrappings of chocolates. Personally I would forbid smoking except in particular enclosures. It is quite un- necessary. And, above all, at the beginning of each " session " the bath and its surroundings should be, as they could be, spotless. Here they never are : in no bath that I have seen other than the Serpentine. But the remedy lies in organization and the employment of extra labour, and Heaven knows labour is not difficult to find, and when it actually pays to provide it, it is a