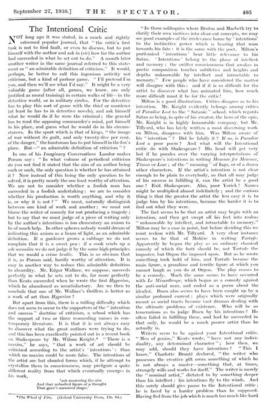 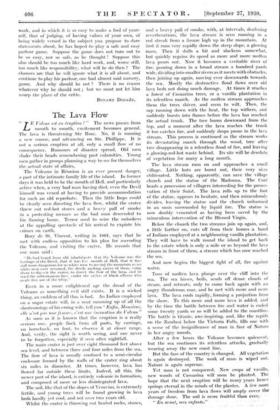 NOT long ago it was stated, in a much and rightly

NOT popular journal, that " the critic's first task is not to find fault, or even to discuss, but to put himself with the author and ask in (sic) how far the author had succeeded in what he set out to do." A month later another writer in the same journal referred to this state- ment as " an admirable definition of criticism." It would, perhaps, be better to call this ingenious activity not criticism, but a kind of parlour game. " I'll pretend I'm you, and then we'll see what I'd say." It might be a very valuable game (after all, games, we know, are only justified as moral training) in certain walks of life—in the detective world, or in military circles. For the detective has to play this sort of game with the thief or murderer (at least he has to in detective novels), and ask himself what he would do if he were the criminal ; the general has to read the opposing commander's mind, put himself in his place; and guess what he would do in his circum- stances: In the sport which is that of kings, " the image of war without its guilt, and only twenty-five per cent. of the danger," the huntsman has to put himself in the fox's place. But—" an admirable definition of criticism " ?

In one of his Imaginary Conversations Landor makes Porson say : " In what volume of periodical criticism do you not find it stated that the aim of an author being such or such, the only question is whether he has attained it ? Now instead of this being the only question to be solved, it is pretty nearly the one least worthy of attention. We are not to consider whether a foolish man has succeeded in a foolish undertaking : we are to consider whether his production is worth anything, and why it is, or why it is not ? " We must, naturally distinguish between one kind of work and another ; we must not blame the writer of comedy for not producing a tragedy ; but to say that we must judge of a piece of writing only by the author's intentions is too elementary an axiom to be of much help. In other spheres nobody would dream of indicating this axiom as a beam of light, as an admirable definition. If a gardener grows a cabbage we do not complain that it is a sweet pea : if a cook sends up a sole meuniere we do not judge it by the same high principles that we would a crime brulee. This is so obvious that it is, as Porson said, hardly worthy of attention. It is easy in another way to reduce this admirable definition to absurdity. Mr. Edgar Wallace, we suppose, succeeds perfectly in what he sets out to do, far more perfectly than Keats succeeded when he wrote the first Hyperion, which he abandoned as unsatisfactory. Are we then to conclude that one of Mr. Wallace's thrillers is better as a work of art than Hyperion ?

But apart from this, there is a trifling difficulty which does not seem to occur to the supporters of the " intention and success " doctrine of criticism, a school which has the support of two or three resounding names in con- temporary literature. It is that it is not always easy to discover what the great authors were trying to do, and this has been excellently pointed out in a recent book on Shakespeare by Mr. Wilson Knight.* " There is a maxim," he says, " that a work of art should be criticized according to the artist's ` intentions ' : than which rio maxim could be more false. The intentions of the artist are but clouded forms which, if he attempt to crystallize them in consciousness, may prefigure a quite different reality from that which eventually emerges in his work,

`not answering the aim And that unbodied figure of a thought That gave't surmised shape.'

• "In those soliloquies where Brutus and Macbeth try to clarify their own motives into clear-cut concepts, we may see good examples of the irrelevance borne by ' intentions' to the instinctive power which is bearing that man towards his fate : it is the same with the poet. Milton's puritanical ` intentions ' bear little relevance to his Satan. ` Intentions ' belong to the plane of intellect and memory : the swifter consciousness that awakes in poetic composition touches subtleties and heights and depths unknowable by intellect and intractable to memory." Few people who have considered the matter will disagree with this : and if it is so difficult for the artist to discover what has animated hint, how much more difficult must it be for the critic!

Milton is a good illustration. Critics disagree as to his intention. Mr. Knight evidently belongs among critics of Paradise Lost to the " Satanic " school, which regards Satan as being, in spite of his creator, the hero of the epic. Mr. Knight is in highly honourable company, but Mr. Tillyard, who has lately written a most discerning work on Milton, disagrees with him. Was Milton aware of his " intention " ? Did he falsify it ? If so, is Paradise Lost a poor poem ? And what will the Intentional critic do with Shakespeare ? His head will get very hot if he puzzles over the varying interpretations of Shakespeare's intentions in writing Measure for Measure, Tinton or Lear ; of the " meaning " of lago, or of a dozen other characters. If the artist's intention is not clear enough- to be plain to everybody, so that all may judge of his success in fulfilling it, can the artist be a good one ? Exit Shakespeare. Alas, poor Yoriek ! Names might be multiplied almost indefinitely ; and the curious thing is that the greater the artist the less easy it is to judge him by his intentions, because the harder it is to find out what they were.

The fact seems to be that an artist may begin with an intention, and then get swept off his feet into realms " unknowable by intellect, and intractable to memory." Milton may be a case in point, but before deciding this we must reckon with Mr. Tillyard. A very clear instance seems to be that of Moliere in writing Tartufe. Apparently he began the play as an ordinary classical comedy of which the butt should be, not Tartufe the imposter, but Orgon the imposed upon. But as he wrote something took hold of hint, and Tartufe became the main figure, a grandiose and terrific figure at which you cannot laugh as you do at Orgon. The play ceases to be a comedy. Much the same seems to have occurred with Le Misanthrope, which began as a comedy against the anti-social man, and ended as a poem about the idealist. Ibsen also seems to have been caught up by a similar profound current : plays which were originally meant as social tracts became vast dramas dealing with the ultimate problems of existence. Who will be so temerarious as to judge Ibsen by his intentions ? lie often failed in fulfilling these, and had he succeeded in that only, he would be a much poorer artist than he actually is.

Writers seem to be against your Intentional critic. " Men of genius," Keats wrote, " have not any indivi- duality, any determined character " ; how then, we may add, should they have intentions ? " This I know," Charlotte Bronte declared, " the writer who possesses the creative gift owns something of which he is not always a master—something that, at times, strangely wills and works for itself." The writer is merely the " nominal artist," dictated to by something deeper than his intellect : his intentions fly to the winds. And this surely should give pause to the Intentional critic ; he is faced by a harder problem than he supposed. Having fled from the job which is much too much like hard work, and in which it is so easy to make a fool of your- self, that of judging, of having values of your own, of being widely versed in the subject you. propose to dare statements about, he has hoped .to play a safe and easy parlour game. Suppose the game does not turn out to be so easy, nor so safe, as he thought ! Suppose this also should be too much like hard work, and, worse still, too much like responsibility, what will he do then ? The chances are that lie will ignore what it is all about, and continue to play his parlour, one had almost said nursery, game. And why should he not ? There is no reason whatever why he should not ; but we must not let him usurp the place of' the critic.