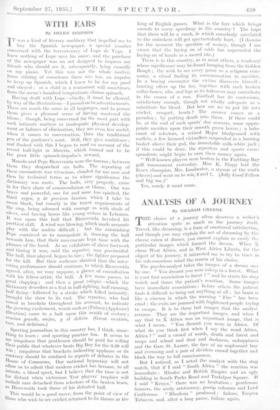 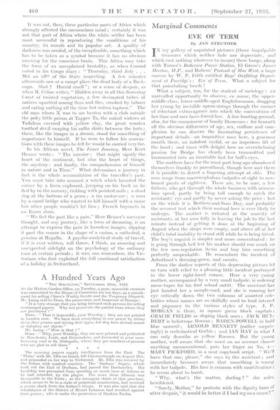 ANALYSIS. OF A JOURNEY

THE choice of a journey often deserves a writer's. attention quite as much as the journey itself. Travel, like dreaming, is a form of emotional satisfaction, and though you may explain the act of dreaming by the ihe. r When the cheese eaten at dinner, you .cannot explain so easily the particular images. which formed chose West Africa, and in ,West the Africa dream. object of his journey, it interested me to try to trace in his sub-conscious mind the reason of his choice. The psycho-analyst takes the images of a dream one by one. " You dreamt you were asleep in a forest. What is your first association to forest ? and he starts his stop watch and times the patient s reaction. Some images have immediate associations : before aotla• finds it difficult to bring out anything at like a cinema in which the warning " Fire " has been cried ; the exits are jammed with frightened people trying to escape. It is to these la.st images that the analyst returns. They are the important images, and when say that to X Africa was an important iinmaAgfer,iota.h.at Oise swdofrodre Africa, fr and what I mean. " You dreamt you were what do you think first when I the an Africa " and a crowd of words, death maps and school and dust and darkness, unhappiness and the Gare St. Lazare, the face of an unpleasant boy and evensong and a pair of dividers crowd together and block the way to full i d llcoanesteeioum na ssalyst with the stop. • But I noticed, a watch, that if I said " South Africa " the reaction was immediate : Rhodes and British Empire and an ugly building in South Parks Road and Trafalgar Square. If I said " Kenya," there was no hesitation : gentleman farmers, the seedy aristocracy, gossip columns and Lord Castierosse. " Rhodesia " produced : failure Empire Tobacco. and, after a lona pause, failure again. It was not, then, these particular parts of Africa which strongly affected the unconscious mind ; certainly it was not that part of Africa where the white settler has been most successful in reproducing the conditions. of his country, its morals and its popular art. A quality of darkness was needed, of the inexplicable, something which has to be taken as a symbol because it has no obvious meaning for the conscious brain. This Africa may take the form of an unexplained brutality, as when Conrad noted in his Congo diary : " Thursday, third July . . . Met an offer of the State inspecting. A few minutes . afterwards saw at a camps place the dead body of a Back- ongo. Shot ? Horrid smell"; or a sense of despair, as when M. Celine writes, " Hidden away in all this flowering (.)rest of twisted vegetation, a few decimated tribes of natives squatted among fleas and flies, crushed by taboos and eating nothing all the time but rotten tapioca." The old man whom X was to see beaten with a club outside the poky little prison at Tappee Ta, the naked widows at Tailahun covered with yellow clay, the great wooden toothed devil swaying his raffia skirts .between the huts ; these, like the images in a dream, stood for something of importance to himself. If he were to follow his associa- tions with these imageahe felt he would be carried very far.

In his African novel, The Inner Journey, Herr Kurt Heuser wrote : " The interior : that might signify the heart of the continent, but also the heart of• things, the mystery : and finally, the comprehension of himself in nature and in Time." What determines a journey in fact is the whole accumulation of the traveller's past. You must take into account a witch which haunted the corner by a linen cupboard, jumping on his back as he fled by to the nursery, tickling with pointed nails ; a dead dog at the bottom of a pram ; a tin motor-car ; a man by a canal bridge who wanted to kill himself with a razor but other people wouldn't let him ; French bayonets in an Essen slum.

" We feel the past like a pain," Herr Heuscr's surveyor thought, and any journey., like a form of dreaming, is an attempt to express the pain in harmless images, slipping it past the censor in the shape of a casino, a cathedral, a pension at Rapallo. A psycho-analytical study of travel, if it is ever written, will throw, I think, an amusing and unexpected sidelight on the psychology of the ordinary man at certain periods ; it was, one remembers, the Vic- torians who first exploited the full emotional satisfaction of a holiday in Switzerland.