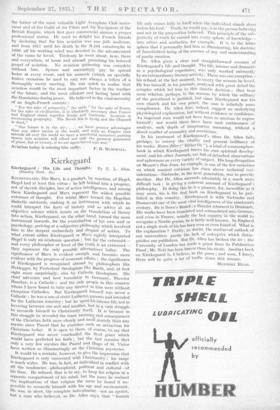 KIERKEGAARD, like Marx, is a product, by reaction, of Hegel. liege1 had at least this virtue he left behind him a progeny, not of slayish disciples, but of active intelligences, and among these Kierkegaard and Marx represent the widest possible extremes of thought. For whilst Marx turned the Hegelian dialectic outwards, making it an instrument with which he could interpret the facts of history and so arrive at an objectiye science which insists, on the translation of. theory into action, Kierkegaard, on the other hand, turned the same instrument inwards, for the examination of his own soul or psychology, arriving at a subjective philosophy which involved him in the deepeSt . melancholy and despair of action. To What extent either Kierkegaard or Marx rightly interpreted Hegel is only an academic question ; but for the extremist_ and every philosopher or lover of the truth is an extremist— they represent the only possible alternatives today. The . significance of Marx is evident enough, and becomes More evident with the progress of economic affairs ; the significance of Kierkegaard is recognised abroad by philosophers like Heidegger, by Protestant theologians like Barth, and, at first sight more surprisingly, also by Catholic theologians. His chief advocate and best translator in Germany, Theodor Haecker, is a Catholic ; and the Only people in this country Whom I have found to take any interest in him were without exception Catholics. But Kierkegaard himself was never a Catholic ; he was a son of strict Lutherauparenta and intended for the Lutheran ministry ; but he spent his intense life, not in • hovering between one sect and another, but in a vaiti struggle' • to reconcile himself to Christianity itself. It is because in this struggle he revealed the inner meanin%a ana cOnseqriences of the Christian faith more clearly and more acutely than ariy Mystic since Pascal that he exercises such an attraction for Christians today. It is open to them, of course; to say that Kierkegaard was never vouchsafed the final grace which Would have perfected his faith ; but the fact remains that only a very few mystics like Pascal and Hugo of St. Victor have written so illuminatingly on the Christian Mysteries. It would be a mistake, however, to give the impression that

• Rierkegaard is only concerned with Christianity his' range Is much wider. He was, in fact, an individual in conflict with all the tendencies—philosophical, political and cultural—of .

his time. He refused, that is to say, to keep his religion in a separate compartment of his mind, but the more he realised the implications of that religion the more he found it urn- pos.iible to reconcile himself with his age and environment. He was, in short, the complete individualist—not an egotist, but a man who believed, • as Dr. -Allen says; that " human life only comes fully to, itself when the individual stands alone before his God." Truth, he would say, is in the person believing and not in the proposition believed. This principle of the sub- jectivity of truth he carried into every sphere of knowledge— into ethics and aesthetics, for example. It is in the latter sphere that I personally find him so illuminating, his doctrine of Innerlichkeit being of the essence of any real understanding of poetic creation. Dr. Allen gives a clear and straightforward account of Kierkegaard's life and thought. The life, intense and dramatic as a psychological experience, was only marked outwardly by an extraordinary literary activity. There was one exception : his refusal, at the last moment, to marry the woman he loved. He has himself, in his journals, analysed with great detail the scruples which led him to this drastic decision ; they bear some relation, perhaps, to the reasons by which the celibacy of the priesthood is justified, but since Kierkegaard was his own church and his own priest, the case is infinitely more complicated. Dr. Allen does, indeed, suggest an underlying physiological explanation, but without evidence or confidence. An impotent man would not have been so anxious to expose himself ; nor would there have been such ruthlessness of analysis, such depth of imaginative reasoning, without a direct conflict of sensuality and asceticism.

In his treatment of Kierkegaard's ideas Dr. Allen fails, perhaps, to convey the vitality and general brilliancy • of his works. Enten-Eller (" Either Or "), a kind of commonplace- book in which Kierkegaard traces his own spiritual develop- ment, and his other Journals, are full of detached observations and aphorisms on every variety of subject. His long divagation on Mozart's Don Juan, for example, is one of the few occasions on which musical criticism bas alsen above technical cm:- siderations—Nietzsche, in the next generation, was to provide another. But Dr. Allen succeeds admirably in a much more task : in giving a coherent account of Kierkegaard's philosophy. In doing this he is a pioneer, for, incredible as it may seem, his is the first book on Kierkegaard to be pub- lished in this country. Nierkegaard is with Nietzsche and Dostoevski one of the most vital intelligences of the nineteenth century. He is Ibsen's Brand ; a Hamlet returned to Denmark. His works have been translated and retranslated into German, and even in France, usually the last country in the world to recognise a Nordic genius, he is fairly well known. In England not a single work of his has been seen or even heard of. What is the explanation ? Partly, no doubt, the mediaeval outlook of our universities; partly the lack of enterprise which distin- guishes our publishers. But Dr. Allen has broken the ice ; the University of London has made a grant from its Publication Fund ; Mr. Nott has been braver than his rivals. Another book press ; and soon, I fancy, there