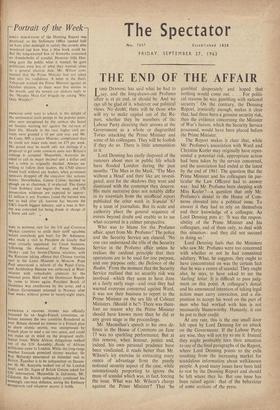 THE END OF THE AFFAIR I ORD DENNING has said what

he had to , say, and the long-drawn-out Profumo affair is at an end, or should be. And we can all be glad of it, whatever our political views. NO doubt, there will be those who will try to make capital out of the Re- port, whether they be members of the Labour Party directing their arrows at the Government as a whole or disgruntled Tories attacking the Prime Minister and some of his colleagues. They will be foolish if they do so. There is little ammunition in it.

Lord Denning has easily disposed of the rumours about men in public life which have flooded London during the past months. 'The Man in the Mask.' 'The Man without a Head' and their like are investi- gated, seen for the shadows they were and dismissed with the contempt they deserve. His main narrative does not notably differ in its essentials from the unofficial report published the other week in Scandal '63 by a team of journalists. But its scale and authority place the general sequence of events beyond doubt and enable us to see what occurred in a calmer perspective.

Who was to blame for the Profumo affair, apart from Mr. Profumo? The police and the Security Service are cleared. 'No one can understand the role of the Security Service in the Profumo affair unless he realises the cardinal principle that their operations are to be used for one purpose, and one purpose only, the Defence of the Realm.' From the moment that the Security Service realised that no security risk was involved—which they seem to have done at a fairly early stage—and once they had warned everyone concerned against Ward, it was not their business to report to the Prime Minister on the sex life of Cabinet Ministers. (Should it be?) There was there- fore no reason why the Prime Minister should have known more than he did at any given stage in the proceedings.

Mr. Macmillan's speech in his own de- fence in the House of Commons on June 17 was no sparkling performance. But at this remove, when honour, justice and, indeed, his own personal prudence have been vindicated, it reads better than Mr. Wilson's icy exercise in extracting every ounce of advantage from the purely notional security aspect of the case, while ostentatiously purporting to ignore the mass of scandal which was, in fact, forcing the issue. What was Mr. Wilson's charge against the Prime Minister? That 'he gambled desperately and hoped that nothing would come out. . . : For politi- cal reasons he was gambling with national security.' On the contrary, the Denning Report, ironically enough, makes it clear that, had there been a genuine security risk, then the evidence concerning the Minister of War's liaison, which the Security Service possessed, would have been placed before the Prime Minister.

The Report makes it clear that, while Mr. Profumo's association with Ward and Christine Keeler may originally have repre- sented a potential risk, appropriate action had been taken by the service concerned, and the association had ended at the latest by the end of 1961. The question that the Prime Minister and his colleagues (in par- ticular the Law Officers) had to answer was : had Mr. Profumo been sleeping with Miss Keeler?—a question that only Mr. Profumo's denial to the House of Com- mons elevated into a political issue. To answer it they had to rely on themselves and their knowledge of a colleague. As Lord Denning puts it : 'It was the respon- sibility of the Prime Minister and his colleagues, and of them only, to deal with this situation : and they did not succeed in doing so.'

Lord Denning feels that the Ministers who saw Mr. Profumo were too concerned with whether or not he had committed adultery. What, he suggests, they ought to have concentrated on was the certain fact that he was a centre of scandal. They ought also, he says, to have asked to see the i `darling' letter. It is difficult to pass judg- ment on this point. A colleague's denial and his announced intention of taking legal action must carry conviction, and a dis- position to accept his word on the part of men who had worked with him is not necessarily blameworthy. Humanly, it can be put to their credit.

At any rate, this is the one small door left open by Lord Denning for an attack on the Government. If the Labour Party are wise, they will not try to use it. Instead they might profitably turn their attention to one of the final paragraphs of the Report, where Lord Denning points to the evils resulting from the increasing market for scandalous information about well-known people. A good many issues have been laid to rest by the Denning Report and should be left where they lie. But one issue has been raised again : that of the behaviour of some sections of the press.