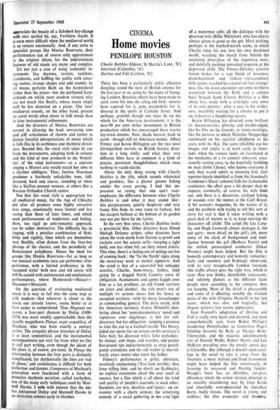 Charlie Bubbles (Odeon, St Martin's Lane, 'X') Interlude (Columbia, 'A') Decline and Fall (Carlton, 'A') There has been a particularly sickly albatross dangling round the neck of British cinema for the last year or so, going by the name of Swing- ing London. Resolute efforts have been made to yank some life into the ailing old bird: movies have capered for it, gone psychedelic for it, dressed in the spoils of Carnaby Street. And perhaps, grateful though one must be on the whole for the American involvement, it is the near-90 per cent dollar investment in British production which has encouraged these tourist toy-town dreams. Now, thank heaven, back to earth—though still on American money. Albert Finney and Kevin Billington are the two most distinguished recruits to British feature direc- tion in a long while; and what their very different films have in common is a kind of precise, persistent thoughtfulness which owes nothing to razzle-dazzle.

About the only thing wrong with Charlie Bubbles is the title, which sounds whimsical and gormless, like a plaster gnome fishing amidst the crazy paving. I find this im- pression so strong that one can't over- emphasise the difference between what Charlie Bubbles is and what it may sound like: this perspicacious, quietly desperate and very funny film finds its own route to fantasy, but the escapist balloon at the bottom of its garden was not put there by the fairies.

In the very best sense, Charlie Bubbles looks a provincial film. Other directors have filmed Shelagh Delaney scripts; other directors have taken the train north from Euston to prowl and exclaim over the satanic mills—keeping a tight hold, one has often felt, on their return tickets.

This time, there's a feeling not of setting out but of coming back : the 'To the North' signs along the motorway work as mental signposts. And the mind is that of a successful but unhappy novelist, Charlie, bone-weary, listless, kept going by a dogged North Country sense of obligation. Accountants and agents haggle over him as a tax problem; an old friend survives on jokes and alcohol: the rich man's toy of multiple Iv screens shows him his house as occupied territory—with his bossy housekeeper as commanding general. The drive north, with his American secretary (Lizzie Minnelli) chat- tering about her 'semi-documentary' novel and rapturous over slag-heaps, is not for self- discovery but for obligation: keeping a promise to take his son to a football match. The bleary, jaded eye opens for an instant on his secretary's false hair, his divorced wife's false eyelashes: he slumps, and sleeps, and watches, and pushes five-pound tips indiscriminately at stray petrol- pump attendants and the old waiter (a marvel- lously exact scene) who knew his father.

Finney's performance is gritty, obstinate, resolutely uncharming ('You look terrible,' they keep telling him; and he does); no flashbacks, no explicit statements about the sour smell. of success, but a film which is all about the kind

and quality of people's reactions to each other. Incidents are wry, desolate and funny: an en- counter with a chatty airman; the unnerving comedy of a social gathering in the cold light of a motorway cafe; all the dialogue with the divorced wife (Billie Whitelaw), who has clearly always given as good as she got. Most striking, perhaps, is the football-match scene, in which Charlie takes his son into his own deadened world, watching the match from behind the insulating plate-glass of the expensive seats, and dolefully pushing unwanted popcorn at the depressed child. The Finney-Delaney creative fusion makes for a rare blend of dourness, disenchantment and fantasy—extraordinary little scenes, touched by a matter-of-fact strange- ness, like the dawn encounter on some northern wasteland between the Rolls and a solemn boys' brigade band. Charlie Bubbles is a film about loss, made with a strikingly sure sense of its own identity : after a year in the wilder- ness, incredibly waiting for a cinema to put it on, it deserves a thundering success.

Kevin Billington has directed some brilliant TV documentaries, glinting and double-edged, like his film on the Guards, or ironic-nostalgic, like the pictures in which Malcolm Muggeridge reminisced on his socialist childhood or his years with the Raj. The same infallible eye for images and angles is at work early in Inter- lude, when the camera looks on fascinated at the mechanics of a TV concert rehearsal, occa- sionally cutting away to the hopefully babbling PR man (John Cleese), who knows everyone if only they would admit to knowing him. Girl reporter (nicely identified as from the Standard's 'Londoner's Diary' column) falls for fashionable conductor; the affair goes a bit deeper than he expects; eventually, of course, his wife finds out, and there is a disastrous, civilised licking of wounds over the menus at the Café Royal. A bit woman's magazine, by the nature of it, and the problem with trying to tell this sort of story for real is that it takes writing with a great deal of texture to it, to keep steering the characters off cliché. The script (by Lee Lang- ley and Hugh Leonard) almost manages it, but not quite : more detail on the girl's job, more sense of the clash of background and intel- ligence between the girl (Barbara Ferris) and the settled, preoccupied conductor (Oskar Werner) might have helped. But the film is honestly contemporary and honestly romantic.: leafy and summery and flashingly observant, with its very recognisable London locations (the traffic always goes the right way, which is rarer titan you think), identifiable restaurants, and sidelong glances at the different faces people wear according to the company they are keeping. Most of the detail is pleasurable and some of it affecting, notably the stricken poise of the wife (Virginia Maskell) in her last scene; which was also, and tragically, this' elegant actress's last screen appearance.

Ivan Foxwell's adaptation of Decline and Fall is really very loyal and devoted, and most sympathetically cast, from Robin Phillips's wondering Pennyfeather to Genevieve Page's blinding descents by Rolls as Margot Beste- Chetwynde, and the majestic schoolmasterly trio of Donald Wolfit, Robert Harris and Leo McKern presiding over the unruly sports day at Llanabba. But although it doesn't seem sacri- lege to the novel to take it away from the 'twenties, a more stylised and fixed framework might have helped the film enormously, in focusing its wayward and floating fancies. Waugh's book has an effortless, cut-glass effrontery which the screen version, directed in an amiably meandering way by John Krish and cheerfully over-decorated by Jonathan Barry, badly misses. The novel is young and ruthless; the film avuncular and beaming.