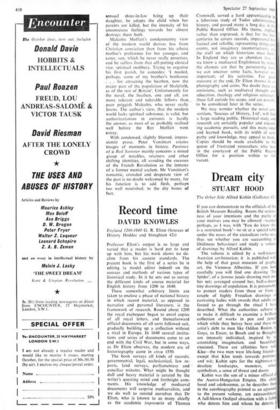 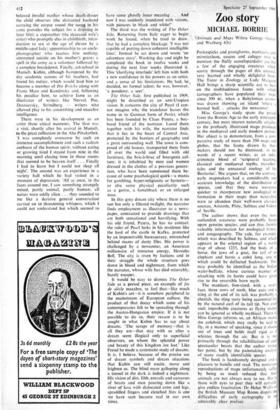 STUART-HOOD The Other Side Alfred Kubin (Gollancz 42s!

If you can demonstrate to the officials of the British Museum Reading Room the serious- ness of your intentions and the purity of your motives you may be allowed—warned perhaps, as I was, with 'You do know this is a restricted book'—to sit at a special table under the noses of the custodians (who may thus see whether you are succumbing to libidinous behaviour) and study a volume of drawings by Alfred Kubin.

The volume is edited by a well-known Austrian art-historian; it is published with the help of that great museum of graphic art, the Viennese Albertina. If you look carefully you will find one drawing 'The Spider', of a femme fatale drawing men into her net; arranged around her, half-a-dozen tiny drawings of copulation. It is presumably to protect readers from these or from a couple of highly Freudian drawings 0 castrating ladies with swords that adults ar forced to go through the ritual I ha" described. What the authorities achieve i. to make it difficult to examine a brillian collection of works in pen and pencil which while they betray here and there th artist's debt to men like Odilon Redon, to Goya, to Ensor, to Bosch and to Breughel are intensely individual, inspired by at astonishing imagination, and beautiful!! executed. There are affinities here will Klee—the two men were life-long friends except that Klee tends towards prettine and wit; Kubin opts for the nightmare desolate landscapes, monsters, sex symbolism, a sense of threat and doom.

Kubin was the son of a minor official the Austro-Hungarian Empire. His ail hood and adolescence, as he describes the in the autobiography printed as an append to the present volume, are extraordina A full-blown Oedipal situation with a fat who detests him and whom he detests; beloved invalid mother whose death-throes the child observes (the distracted husband carrying the corpse round the moot in his arms provides the subject for a drawing in later life); a stepmother (the deceased wife's sister) who promptly dies in childbirth; intro- duction to sex at the age of eleven by a middle-aged lady; apprenticeship to an uncle- photographer who teaches him nothing; attempted suicide on his mother's grave; a spell in the army as a volunteer followed by a complete breakdown. Finally, art-school in Munich. Kubin, although hampered by the dry academic canons of his teachers, had found his metier, which would lead him to become a member of Die Briicke along with Franz Marc and Kandinsky and, following his peculiar bent, to achieve fame as an illustrator of writers like Nerval, Poe, Dostoevsky, Strindberg — writers who allowed play to his astonishing and macabre intelligence.

There were in his development as an artist three citical moments. The first was a visit, shortly after his arrival in Munich, to the great collection in the Alte Pinakothek. 'I was completely overcome by such an immense accomplishment and such a radiant outburst of the human spirit: without eating or growing tired I stayed from nine in the morning until closing time in those rooms that seemed to be heaven itself . . . Finally I had to leave but I could not sleep all night'. The second was an experience in a variety hall which he had visited in a moment of depression. 'All at once, in the faces around me, I saw something strangely mixed, partly animal, partly human; all noises were oddly alien . . . they sounded to me like a derisive general conversation carried on in threatening whispers, which I could not understand but which seemed to have some ghostly inner meaning . . . And now I was suddenly inundated with visions, with pictures in black and white!'

The third was the writing of The Other Side. Returning from Italy eager to begin work he found, when he tried to draw, that he had a complete blockage. 'I was not capable of putting down coherent intelligible lines'. Instead he sat down and wrote 'an adventure story'. Working day and night he completed the book in twelve weeks and during the next four weeks illustrated it. This 'clarifying interlude' left him with both a new confidence in his powers as an artist, and a sense of his limitations. He had, her decided, no formal talent; he was, however, 'a ponderer, a seer'.

The Other Side, first published in 1909, might be described as an anti-Utopian vision. It concerns the city of Pearl (I can- not imagine why the translator leaves the name in its German form of Perle), which has been founded by Claus Patera, a boy- hood friend of the narrator. Lured there together with his wife, the narrator finds that it lies in the heart of Central Asia, protected by the barriers of geography and a great surrounding wall. The-town is com- posed of old houses, transported there from all over the world and filled with old furniture, the bric-i-brae of bourgeois cul- ture; it is inhabited by men and women dressed in the clothes of a previous genera- tion, who have been summoned there be- cause of some psychological quirk—a mania for gambling, hyper-religiosity or hysteria— or else some physical peculiarity such as a goitre, a hunchback or an enlarged nose.

In this grey dream city where there is no sun but only a filtered twilight, the narrator finds employment as illustrator to a news- paper, contracted to provide drawings that are both sensational and horrifying. With his old friend, Patera, he has no contact; the ruler of Pearl lurks in his residence like the lord of the castle in Kafka, protected by an impenetrable bureaucracy, entrenched behind mazes of dusty files. His power is challenged by a newcomer, an American millionaire of immense energy, Hercules Bell. The city is riven by factions and in their struggle the whole structure goes down in blood and nightmare, from which the narrator, whose wife has died miserably, barely escapes.

It would be easy to dismiss The Other Side as a period piece, an example of fin de siècle macabre, to feel that—like much of Kubin's art—it is somehow peripheral to the mainstream of European culture, the product of that decay which some of his contemporaries felt to be spreading through the Austro-Hungarian empire. If it is not possible to do so, their reason is to be sought in what Kubin has to say about dreams. 'The scraps of memory—that is all they are—that stay with us after a dream seem illogical only to superficial observers, on whom the splendid power and beauty of this kingdom are lost.' Like Freud he made a systematic study of dreams. It is, I believe, because of the precise use of dream symbols and dream situations that Kubin can still excite, move and frighten us. The blind mare galloping along a tunnel in the dark is indeed a nightmare.

His vision of dirt, filth, entrails and carcasses of beasts and men pouring down like a river of lava with dislocated arms and legs, spraddled fingers and clenched fists is one we have seen become real in our own times.