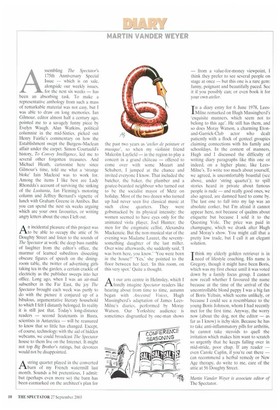 Assembling The Spectator's 175th Anniversary Special Issue — which is on sale, alongside our weekly issues. for the next six weeks — has been an absorbing task. To make a representative anthology from such a mass of remarkable material was not easy, but I was able to draw on long memories. Ian Gilmour, editor almost half a century ago, pointed me to a savagely funny piece by Evelyn Waugh. Alan Watkins, political columnist in the mid-Sixties, picked out Henty Fairlie's commentary on how the Establishment swept the Burgess-Maclean affair under the carpet. Simon Courtauld's history, To Convey Intelligence, led me to several other forgotten treasures. And Michael Heath, cartoonist here since Gilmour's time, told me what a 'strange bloke' lain Macleod was to work for. Among the items I like best are Lady Rhondda's account of surviving the sinking of the Lusitania, Ian Fleming's motoring column and Jeffrey Bernard's vignette of lunch with Graham Greene in Antibes. But you can spend the next six weeks arguing which are your own favourites, or writing angry letters about the ones I left out.

An incidental pleasure of this project was to be able to occupy the attic of 56 Doughty Street and listen to the sounds of The Spectator at work: the deep bass rumble of laughter from the editor's office, the murmur of learned subeditors dissecting obscure figures of speech on the diningroom table, the twitter of advertising girls taking tea in the garden, a certain crackle of electricity as the publisher sweeps into her office. Long ago, when I was an air-mail subscriber in the Far East, the joy The Spectator brought each week was partly to do with the picture it conjured up of a bibulous, argumentative literary household to which I felt I distantly belonged. In reality it is still just that. Today's long-distance readers — second lieutenants in Basra. scientists in Antarctica — will be reassured to know that so little has changed. Except, of course, technology: with the aid of hidden webcams, we could broadcast The Spectator house to them live on the Internet. It might not top Big Brother's ratings, but devotees would not be disappointed.

Astring quartet played in the converted .barn of my French watermill last month. Sounds a bit pretentious. I admit: but (perhaps even more so) the barn has been earmarked on the architect's plan for the past two years as 'atelier de peinture et musique', so when my violinist friend Malcolm Layfield — in the region to play a concert in a grand château — offered to come over with some Mozart and Schubert, I jumped at the chance and invited everyone I know. That included the butcher, the baker, the plumber and a goatee-bearded neighbour who turned out to be the socialist mayor of Metz on holiday. Most of the two dozen who turned up had never seen live classical music at such close quarters. They were gobsmacked by its physical intensity: the women seemed to have eyes only for the animated viola player. Joel Hunter; the men for the enigmatic cellist, Alexandra Mackenzie. But the non-musical star of the evening was Madame Lauzet, the seventysomething daughter of the last miller. Over wine afterwards, she suddenly said, 'I was born here, you know.' You were born in the house?' 'Yes,' she pointed to the floor between her feet. 'In this room, on this very spot.' Quite a thought.

At our arts centre in Helmsley, which I .fondly imagine Spectator readers like hearing about from time to time, autumn began with Ancestral Voices, Hugh Massingberd's adaptation of James LeesMilne's diaries, performed by Moray Watson. Our Yorkshire audience is sometimes disgruntled by one-man shows — from a value-for-money viewpoint, I think they prefer to see several people on stage at once — but this one is a rare gem: funny, poignant and beautifully paced. See it if you possibly can; or even book it for your own atelier.

In a diary entry for 6 June 1978, LeesMilne remarked on Hugh Massingberd's 'exquisite manners, which seem not to belong to this age'. He still has them, and so does Moray Watson, a charming Etonand-Garrick-Club actor who dealt patiently with a flock of genteel groupies claiming connections with his family and schooldays. In the context of manners, Hugh and I discussed the difficulty of writing diary paragraphs like this one or indeed, on a higher plane, like LeesMilne's. To write too much about yourself, we agreed, is uncomfortably boastful (see above, under 'string quartet'); to spill stories heard in private about famous people is rude — and really good ones, we also agreed, are damned hard to come by. The last one to fall into my lap was an absolute corker, but I'm afraid it cannot appear here, not because of qualms about etiquette but because I sold it to the Questing Vole. The price was paid in champagne, which we drank after Hugh and Moray's show. You might call that a pretty low trade, but I call it an elegant solution.

Ithink my elderly golden retriever is in I need of lifestyle coaching. His name is Gregory, though it might have been Boris, which was my first choice until it was voted down by a family focus group. I cannot now recall whether I favoured the name because at the time of the arrival of the uncontrollable blond puppy I was a big fan of Boris Yeltsin, which seems unlikely, or because I could see a resemblance to the young Boris Johnson, whom I had recently met for the first time. Anyway, the worry now (about the dog, not the editor — as far as I know) is itchy skin. Because he has to take anti-inflammatory pills for arthritis, he cannot take steroids to quell the irritation which makes him want to scratch so urgently that he keeps falling over in mid-stride, poor chap. If any reader even Carole Caplin, if you're out there can recommend a herbal remedy or New Age therapy, do write to me, care of the attic at 56 Doughty Street.

Martin Vander Weyer is associate editor of The Spectator.