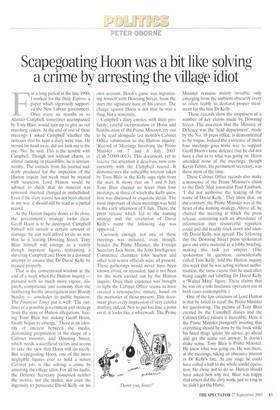 Page 11, 27 September 2003 — Scapegoating Hoon was a bit like solving a crime by arresting the village idiot
Close

or a long period in the late 1990s I worked for the Daily Express, a paper which vigorously supported the New Labour government. Once every six months or so Alastair Campbell, sometimes accompanied by Tony Blair, would turn up to give us our marching orders. At the end of one of these meetings I asked Campbell whether the rumours that he kept a diary were true. He moved his head away, did not look me in the eye. 'No,' he said. This is the trouble with Campbell. Though not without charm, or animal cunning or plausibility, he is untrustworthy. The extracts from his journal suddenly produced for the inspection of the Hutton inquiry last week must be treated with suspicion. Lord Hutton would be advised to check that no material was removed, inserted, changed or embellished. Even if the diary record has not been altered in any way, it should still be read as a partial record.

As the Hutton inquiry draws to its close, the government's strategy looks clear. Geoff Hoon is to be destroyed. Campbell himself will sustain a certain amount of damage: he can well afford to do so now that he is leaving Downing Street. Tony Blair himself will emerge as a saintly though impotent figure, restraining a slavering Campbell and Hoon in a doomed attempt to ensure that Dr David Kelly be treated properly.

That is the conventional wisdom at the end of a week when the Hutton inquiry — pursued with so much more vigour, dispatch, competence and economy than the lumbering Saville investigation into Bloody Sunday — concludes its public business. The Financial Times put it well: 'The outlines of a possible government exit strategy from the mire of Hutton allegations, freeing Tony Blair but sinking Geoff Hoon, finally began to emerge.' There is an identity of interest between the media, demanding propitiation in the shape of a Cabinet minister, and Downing Street, which needs a sacrificial victim and seems to take the view that Hoon will do nicely. But scapegoating Hoon, one of the more negligible figures ever to hold a senior Cabinet job, is like solving a crime by arresting the village idiot, For all his faults, the Defence Secretary possessed neither the motive, nor the malice, nor even the ingenuity to persecute David Kelly on his own account. Hoon's game was ingratiating himself with Downing Street, from the start the signature tune of his career. The charge against Hoon is not that he was a thug, hut a nonentity.

Campbell's diary entries, with their profanity, careful incrimination of Hoon and beatification of the Prime Minister, cry out to be read alongside last month's Cabinet Office submission to the Hutton inquiry: 'Record of Meetings Involving the Prime Minister on 7 and 8 July 2003' (Cab/7/0009-0013). This document, yet to receive the attention it deserves, runs concurrently with the Campbell record. It demonstrates the unhealthy interest taken by Tony Blair in the Kelly saga right from the start. It shows that on 7 and 8 July Tony Blair chaired no fewer than four meetings, at three of which the Kelly question was discussed in exquisite detail. The most important of these meetings was held in the early afternoon of 8 July. There, the press release which led to the naming strategy and the revelation of David Kelly's name the following day was approved.

Curiously enough, not one of these meetings was minuted, even though, besides the Prime Minister. the Foreign Secretary Jack Straw, the Joint Intelligence Committee chairman John Scarlett and other very senior officials were all present. These gatherings would never have been known about, or recorded, had it not been for the work carried out by the Hutton inquiry. Once their existence was brought to light the Cabinet Office seems to have created a retrospective minute, based on the memories of those present. This document gives every impression of very careful drafting indeed. Not to put too fine a point on it, it looks like a whitewash. The Prime Minister remains mainly invisible, only emerging from the ambient obscurity every so often feebly to demand proper treatment for the late Dr Kelly.

These records show the emptiness of a number of key claims made by Downing Street. The assertion that the Ministry of Defence was the 'lead department', made by the No. 10 press office, is demonstrated to be bogus. Indeed the existence of these four meetings goes some way to support Geoff Hoon's lame defence that he did not have a clue as to what was going on. Hoon attended none of the meetings, though Kevin Tebbit, his permanent secretary, was there most of the time, These Cabinet Office records also make a nonsense of the Prime Minister's claim to the Daily Mail journalist Paul Fastham, 'I did not authorise the leaking of the name of David Kelly.' They show that, on the contrary, the Prime Minister was at the heart of the naming strategy. Above all, he chaired the meeting at which the press release, containing such an abundance of information that resourceful reporters could and did readily track down and identify David Kelly, was agreed. The following day the Downing Street press spokesman gave out extra material at a lobby briefing, making this task yet simpler, (The spokesman in question, coincidentally called Tom Kelly, told the Hutton inquiry this week that he was acting without authorisation, the same excuse that he used after being caught out labelling Dr David Kelly a 'Walter Mitty' figure. These claims that he was on a solo freelance operation are in both cases contemptible.) One of the few criticisms of Lord Hutton is that he failed to recall the Prime Minister for questioning. The picture of Tony Blair created by the Campbell diaries and the Cabinet Office minute is incredible. Here is the Prime Minister plangently insisting that everything should be done by the book while his hired thugs ignore his advice, go ahead and get the name out anyway. It doesn't make sense. Tony Blair is Prime Minister. He knew what was going on. He was there, at the meetings, taking an obsessive interest in Dr Kelly's fate. At any stage he could have called a halt to the whole sordid operation. He chose not to do so. Hutton should have asked him why not. Blair was happy that others did the dirty work, just so long as he didn't get the blame.