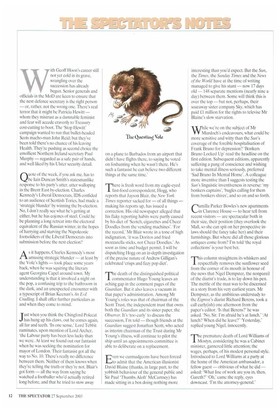 cold in its grave, wrangling over the succession has already begun. Senior generals and officials in the MoD are keen to ensure that the next defence secretary is the right person — or, rather, not the wrong one. There's real terror that it might be Patricia Hewitt — whom they mistrust as a damnable feminist and fear will accede cravenly to Treasury cost-cutting to boot. The 'Stop Hewitt' campaign wanted to run that bullet-headed Scots macho-man John Reid; but they've been told there's no chance of his leaving Health. They're pushing as second choice the emollient Northern Ireland secretary Paul Murphy — regarded as a safe pair of hands, and well liked by his Ulster security detail.

Quote of the week, if you ask me, has to be lain Duncan Smith's statesmanlike response to his party's utter, utter walloping in the Brent East by-election. Charles Kennedy's Liberal Democrats, IDS confided to an audience of Scottish Tories, had made a 'strategic blunder' by winning the by-election. No, I don't really see what he's getting at either, but he has cojones of steel. Could he be planning a long retreat into the electoral equivalent of the Russian winter, in the hopes of harrying and starving the Napoleonic footsoldiers of the Liberal Democrats into submission before the next election?

As it happens, Charles Kennedy's most amusing strategic blunder — at least by the Vole's lights — took place some years back, when he was squiring the literary agent Georgina Capel around town. My understanding is that it involved a night on the pop, a confusing trip to the bathroom in the dark, and an unexpected encounter with a typescript of Brian Keenan's Art Evil Cradling. I shall offer further particulars as and when they come to mind.

Just when you think the Chingford Polecat has hung up his claws, out he comes again, all fur and teeth. 'In one sense.' Lord Tebbit ruminates, upon mention of Lord Archer, 'the Labour party has been less lucky than we were. At least we found out our fantasist when he was seeking the nomination for mayor of London, Their fantasist got all the way to No. 10. There's really no difference between them. Neither of them knows when they're telling the truth or they're not. Blair's got form — all the way from saying he watched a footballer who'd actually retired long before, and that he tried to stow away

on a plane to Barbados from an airport that didn't have flights there, to saying he voted on foxhunting when he wasn't there. He's such a fantasist he can believe two different things at the same time.'

ere is fresh word from my eagle-eyed fast-food correspondent, Hogg, who reports that Jayson Blair, the New York Times reporter sacked for — of all things — making his reports up, has issued a correction. His old newspaper alleged that his flaky reporting habits were partly caused by his diet of 'Scotch, cigarettes and Cheez Doodles from the vending machines'. 'For the record,' Mr Blair wrote in a tone of high indignation, 'it was Doritos and fried mozzarella sticks, not Cheez Doodles.' As soon as time and budget permit. I will be dispatching Hogg on an in-depth investigation of the precise nature of Andrew Gilligan's celebrated 'crisps and fizzy pop diet'.

The death of the distinguished political

Hugo Young leaves an aching gap in the comment pages of the Guardian. But it also leaves a vacuum in that paper's administration. Among Mr Young's roles was that of chairman of the Scott Trust, the independent trust that owns both the Guardian and its sister paper. the Observer. It's 'too early' to discuss the succession, I'm told — though friends at the Guardian suggest Jonathan Scott, who acted as interim chairman of the Trust during Mr Young's illness, will continue to pilot the ship until an appointments committee is able to deliberate on a replacement.

'r yen we curmudgeons have been forced LAD admit that the American illusionist David Blaine (thanks. in large part, to the yobbish behaviour of the general public and Sir Paul 'Thumbs Aloft' McCartney) has made sitting in a box doing nothing more

interesting than you'd expect. But the Sun, the Times, the Sunday Times and the News of the World have at the time of writing managed to give his stunt — now 17 days old 148 separate mentions (nearly nine a day) between them. Some will think this is over the top — but not, perhaps, their soaraway sister company Sky, which has paid £1 million for the rights to televise Mr Blaine's slow starvation.

le we're on the subject of Mr Murdoch's endeavours, what could be more sensitive and witty than the Sun's coverage of the forcible hospitalisation of Frank Bruno for depression? `Bonkers Bruno Locked Up' read the headline on the first edition. Subsequent editions, apparently suffering a pang of conscience and wishing to take mental illness seriously, preferred Sad Bruno In Mental Home'. A colleague more inventive than I suggests testing the Sun's linguistic inventiveness in reverse: 'my bonkers captains', 'bugles calling for them from bonkers shires', and so on and so forth,

Camilla Parker Bowles's new apartments in Clarence House — to hear tell from recent visitors — are spectacular both in their size, their position (they overlook the Mall, so she can spit on her prospective inlaws should the fancy take her) and their furnishings. But where did all those glorious antiques come from? I'm told 'the royal collections' is your best bet.

This column straightens its whiskers and respectfully removes the sunflower seed from the corner of its mouth in honour of the news that Nigel Dempster, the nonpareil of the diarist's trade, is to lay down his pen. The mettle of the man was to be discerned in a story from his very earliest years. Mr Dempster, as the ambitious understudy to the Express's diarist Richard Berens, took a call early(ish) one afternoon from the paper's editor, 'Is that Berens?' he was asked. 'No. Sir. I'm afraid he's at lunch.' At lunch? When did he leave?' Yesterday,' replied young Nigel, innocently.

The premature death of Lord Williams of Nlostyn, considering he was a Cabinet minister, garnered little attention; the wages, perhaps, of his modest personal style. Introduced to Lord Williams at a party at the home of the American ambassador, a fellow guest — oblivious of what he did — asked: 'What line of work are you in. then, Gareth?' 0h,' came the reply, eyes downcast. 'I'm the attorney-general.'