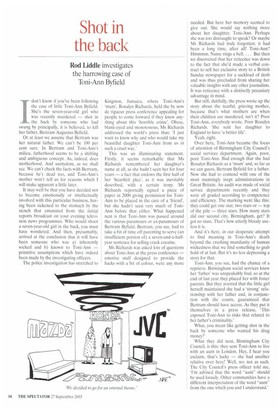 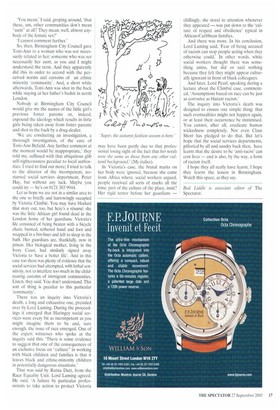 Shot in the back

Rod Liddle investigates the harrowing case of Toni-Ann Byfield Idon't know if you've been following the case of little Toni-Ann Byfield. She's the seven-year-old girl who was recently murdered — shot in

the back by someone who had swung by principally, it is believed, to kill her father, Bertram Augustus Byfield.

Or at least we assume that Bertram was her natural father. We can't be 100 per cent sure. In Bertram and Toni-Ann's milieu, fatherhood seems to be a shifting and ambiguous concept. As, indeed, does motherhood. And auntydom, as we shall sec. We can't check the facts with Bertram, because he's dead too, and Toni-Ann's mother won't tell us for reasons which I will make apparent a little later.

It may well be that you have decided not to become emotionally or intellectually involved with this particular business, having been sickened to the stomach by the stench that emanated from the initial reports broadcast on your evening television news programmes. Who would shoot a seven-year-old girl in the back, you must have wondered. And then, presumably, arrived at the conclusion that it will have been someone who was a) inherently wicked and b) known to Toni-Ann — primitive assumptions which have indeed been made by the investigating officers.

The police investigation has stretched to Kingston, Jamaica. where Toni-Ann's 'mum', Rosalyn Richards, held the by now de rigueur press conference appealing for people to come forward if they knew anything about this 'horrible crime'. Obese, blank-eyed and monotonous, Ms Richards addressed the world's press thus: 'I just want to know why and who would take my beautiful daughter Toni-Ann from us in such a cruel way.'

This was an illuminating statement. Firstly, it seems remarkable that Ms Richards remembered her daughter's name at all, as she hadn't seen her for four years — a fact that endows the first half of her 'heartfelt plea', as it was inevitably described, with a certain irony. Ms Richards reportedly signed a piece of paper in 2000 giving permission for ToniAnn to be placed in the care of a 'friend', but she hadn't seen very much of ToniAnn before that either. What happened next is that Toni-Ann was passed around the various paramours or ex-paramours of Bertram Byfield. Bertram, you see, had to take a bit of time off parenting to serve (an insufficient portion of) a seven-and-a-halfyear sentence for selling crack cocaine.

Ms Richards was asked lots of questions about Toni-Ann at the press conference — emotive stuff designed to provide the hacks with a bit of colour, were any more

needed. But here her memory seemed to give out. She would say nothing more about her daughter, Toni-Ann. Perhaps she was too distraught to speak? Or maybe Ms Richards had truly forgotten: it had been a long time, after all! Toni-Ann? Hmmmm. Name rings a bell. . But then we discovered that her reticence was down to the fact that she'd made a verbal contract to sell her exclusive story to a British Sunday newspaper for a sackload of dosh and was thus precluded from sharing her valuable insights with any other journalists. It was reticence with a distinctly pecuniary advantage in mind.

But still, dutifully, the press wrote up the story about the tearful, grieving mother, because that's what mothers are when their children are murdered, isn't it? Poor Toni-Ann, everybody wrote. Poor Rosalyn Richards. She sent her daughter to England to have 'a better life'.

Over here, Toni-Ann became the focus of attention of Birmingham City Council's social services department. Again, poor, poor Toni-Ann. Bad enough that she had Rosalyn Richards as a 'mum' and, so far as we can guess, Bertram Byfield for a father. Now she had to contend with one of the most stunningly inept administrations in Great Britain. An audit was made of social service departments recently and they were all graded according to competence and efficiency. The marking went like this: they could get one star, two stars or top of the pile — three stars. How many stars did our second city. Birmingham, get? It got no stars. That's how utterly bloody useless it is.

And it's here, in our desperate attempt to find meaning in Toni-Ann's death beyond the crushing mundanity of human wickedness that we find something to grab hold of at last. But it's no less depressing a story for that.

Toni-Ann, you see, had the chance of a reprieve. Birmingham social services knew her 'father' was unspeakably foul, so at the end of last year they placed her with foster parents. But they averred that the little girl herself maintained she had a 'strong' relationship with her father and, in conjunction with the courts, guaranteed that Bertram should have access. As they put it themselves in a press release, 'This exposed Toni-Ann to risks that related to her father's criminality.'

What, you mean like getting shot in the back by someone who wanted his drug money?

What they did next, Birmingham City Council, is this: they sent Toni-Ann to live with an aunt in London. Hey, I hear you exclaim, that's lucky — she had another relative over here! Well, no; not as such. The City Council's press officer told me, 'I'm advised that the word "aunt" should be used loosely. Other communities have a different interpretation of the word "aunt" from the one which you and I understand.' 'You mean,' I said, groping around, 'that these, urn, other communities don't mean "aunt" at all? They mean, well, almost anybody of the female sex?'

So, then, Birmingham City Council gave Toni-Ann to a woman who was not necessarily related to her; someone who was not necessarily her aunt, as you and I might understand the term. And they apparently did this in order to accord with the perceived norms and customs of an ethnic minority 'community'. And, a short while afterwards, Toni-Ann was shot in the back while staying at her father's bedsit in north London.

Nobody at Birmingham City Council would give me the names of the little girl's previous foster parents or, indeed, expound the ideology which results in little girls being taken away from foster parents and shot in the back by a drug-dealer.

'We are conducting an investigation, a thorough investigation, of the care of Toni-Ann Byfield. Any further comment at the moment would be inappropriate,' they told me, suffused with that ubiquitous glib self-righteousness peculiar to local authorities. I tried to find out more; I tried to talk to the director of the incompetent, nostarred social services department, Peter Hay, but without any luck. Maybe you could try — he's on 0121 303 9944.

Let us hope we are not in a similar area to the one so briefly and harrowingly occupied by Victoria Climbie. You may have blocked that story out, too, but here's a resume: she was the little African girl found dead in the London home of her guardians. Victoria's life consisted of being beaten with a bicycle chain, burned, tethered hand and foot and wrapped in a bin-liner and left to sleep in the bath. Her guardians are, thankfully, now in prison. Her biological mother, living in the Ivory Coast, had similarly signed away Victoria to 'have a better life'. And in this case too there was plenty of evidence that the social services had attempted, with lethal sensitivity, not to interfere too much in the childrearing customs of immigrant communities, Listen, they said. You don't understand. This sort of thing is peculiar to this particular 'community'.

There was an inquiry into Victoria's death, a long and exhaustive one, presided over by Lord Laming, During the proceedings it emerged that Haringey social services were every bit as incompetent as you might imagine them to be and, sure enough, the issue of race emerged. One of the expert witnesses who spoke at the inquiry said this: 'There is some evidence to suggest that one of the consequences of an exclusive focus on "culture" in working with black children and families is that it leaves black and ethnic-minority children in potentially dangerous situations.'

That was said by Ratna Dutt, from the Race Equality Unit. Lord Laming agreed. He said, 'A failure by particular professionals to take action to protect Victoria may have been partly due to that professional losing sight of the fact that her needs were the same as those from any other cultural background.' (My italics).

In Victoria's case, the brutal marks on her body were ignored, because she came from Africa where, social workers argued, people received all sorts of marks all the time: part of the culture of the place, innit? Her rigid terror before her guardians — chillingly, she stood to attention whenever they appeared — was put down to the 'culture of respect and obedience' typical in African-Caribbean families.

And there was more. In his conclusion, Lord Laming said, Tear of being accused of racism can stop people acting when they otherwise could.' In other words, white social workers thought there was something amiss, but did or said nothing because they felt they might appear culturally ignorant in front of black colleagues.

And later, Lord Pearl, speaking during a lecture about the Climbie case, commented, 'Assumptions based on race can be just as corrosive as blatant racism.'

The inquiry into Victoria's death was designed to ensure one simple thing: that such eventualities might not happen again, or at least their occurrence be minimised. You cannot, after all, eradicate human wickedness completely. Not even Clare Short has pledged to do that. But let's hope that the social services departments, pilloried by all and sundry back then, have learnt that the desire to be 'anti-racist' can cost lives — and is also, by the way, a form of racism itself.

I hope they all really have learnt. I hope they learnt the lesson in Birmingham. Watch this space, as they say.