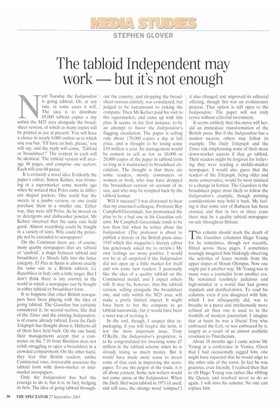 Page 30, 27 September 2003 — The tabloid Independent may work but it's not enough
Close

The tabloid Independent may work but it's not enough

Next Tuesday the Independent is going tabloid. Or, at any rate, in some cases it will. The idea is to distribute 85,000 tabloid copies a day within the M25 area alongside the broadsheet version, of which as many copies will be printed as are at present. You will have a choice in nearly 8,000 outlets as to which one you buy. I'll have an Indy, please,' you will say, and the reply will come, 'Tabloid or broadsheet?' The content in each will be identical. The tabloid version will average 88 pages, and comprise one section. Each will cost 60 pence.

It is certainly a novel idea. Evidently the paper's editor, Simon Kelner, was browsing in a supermarket some months ago when he noticed that Polos came in different shaped packets. One could buy the sweets in a jumbo version, or one could purchase them in a smaller one. Either way, they were still Polos. As he moved on to detergents and dishwasher powder, Mr Kelner observed that the same rule held good. Almost everything could be bought in a variety of sizes. Why could the principle not be extended to newspapers?

On the Continent there are, of course, many quality newspapers that are tabloid or `qualoid', a shape between tabloid and broadsheet. Le Monde falls into the latter category. El Pais in Spain is almost exactly the same size as a British tabloid; La Repubblica in Italy only a little larger. But I don't think there is any country in the world in which a newspaper can be bought in either tabloid or broadsheet form.

It so happens that other British newspapers have been playing with the idea of going tabloid. The Guardian has certainly considered it; its second section, like that of the Times and the existing Independent, is of course already tabloid. Even the Daily Telegraph has thought about it. Hitherto all of them have held back. On the one hand, their managements accept that a commuter on the 7.10 from Basildon does not relish struggling to open a broadsheet in a crowded compartment. On the other hand, they fear that British readers, unlike Continental ones, irrevocably associate the tabloid form with down-market or midmarket newspapers.

Only the Independent has had the courage to do it. but it is, in fact, hedging its bets. The idea of going tabloid through

out the country, and dropping the broadsheet version entirely, was considered, but judged to be tantamount to risking the company. Then Mr Kelner paid his visit to the supermarket, and came up with this plan. It seems, in the first instance, to be an attempt to boost the Independent's flagging circulation. The paper is selling only about 170,000 copies a day at full price, and is thought to be losing some £10 million a year. Its management would be content to sell as few as 10,000 or 20,000 copies of the paper in tabloid form so long as it maintained its broadsheet circulation. The thought is that there are some readers, mostly commuters or women or both, who may have dropped the broadsheet version on account of its size, and who may be tempted back by the tabloid format.

Will it succeed? I was distressed to hear that my esteemed colleague, Professor Roy Campbell-Greenslade. has pronounced the plan to be a bad one in his Guardian column. Mr Campbell-Greenslade tends to be less than fair when he writes about the Independent. (The professor is about to publish a history of the British press since 1945 which this magazine's literary editor has generously asked me to review.) My own feelings are more positive. I would not be at all surprised if the Independent did not open up a little market for itself and win some new readers. I personally like the idea of a quality tabloid on the Continental model, and I expect others will. It may be, however, that the tabloid version, selling alongside the broadsheet one, and only within the M25 area, will make a pretty limited impact. It might have been to bet the company to go tabloid nationwide, but it would have been a surer way of reviving it.

In the end. though, I suspect that repackaging, if you will forgive the term, is not the most important issue. Tony O'Reilly, the Independent's proprietor, is to be congratulated for investing some £5 million in the tabloid scheme when he is already losing so much money. But it would have made more sense to invest some of that cash in improving the newspaper. To use the jargon of the trade, it is all about content. Some new writers would not come amiss at the Independent. When the Daily Mail went tabloid in 1971 (it used, and still uses, the strange word 'compact') it also changed and improved its editorial offering, though this was an evolutionary process. That option is still open to the Independent. The paper will not truly revive without editorial investment.

It seems unlikely that this move will herald an immediate transformation of the British press. But if the Independent has a modest success, others may follow its example. The Daily Telegraph and the Times risk emphasising some of their more down-market aspects if they go tabloid. Their readers might be forgiven for believing they were reading a middle-market newspaper. I would also guess that the readers of the Telegraph, being older and more conservative, would be most inimical to a change in format. The Guardian is the broadsheet paper most likely to follow the Independent's example, though printing considerations may hold it back. My feeling is that some sort of Rubicon has been crossed, and that in two or three years there may be a quality tabloid newspaper on sale throughout Britain.

This column should mark the death of the Guardian columnist Hugo Young for he sometimes, though not recently, flitted across these pages. I sometimes teasingly imagined him blinkingly observing the activities of lesser mortals from the upper slopes of Mount Olympus. Now one might put it another way. Mr Young was in many ways a journalist from another era. He remained resolutely judicious and high-minded in a world that had grown slapdash and dumbed-down. To read his columns, even if you disagreed with him, which I not infrequently did, was to breathe in a purer and intellectually more refined air than one is used to in the foothills of modern journalism. I imagine that at heart he was a liberal Tory who embraced the Left, or was embraced by it, largely as a result of an almost aesthetic revulsion to Thatcherism.

About 18 months ago I came across Mr Young at a conference in Venice. Given that I had occasionally ragged him, one might have expected that he would edge to the other side of the room. In fact he was gracious, even friendly. I realised then that to rib Hugo Young was rather like ribbing the Queen, and resolved never to do so again. I will miss his column. No one can replace him.