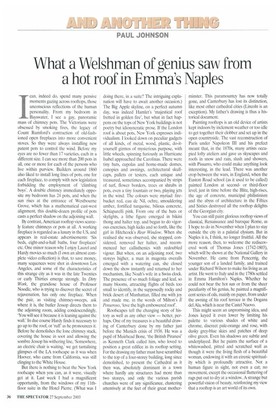 Ican, indeed do, spend many pensive moments gazing across rooftops, those unconscious reflections of the human personality. From my bedroom in Bayswater, I see a gay, panoramic mass of chimney pots. The Victorians were obsessed by smoking fires, the legacy of Count Rumford's contraction of old-fashioned open fireplaces into more convenient stoves. So they were always installing new patent pots to control the wind. Before my eyes are no fewer than 17 varieties, each in a different size. I can see more than 200 pots in all, one or more for each of the persons who live within purview. Builders around 1860 also liked to install long lines of pots, one for each fireplace, to comply with new legislation forbidding the employment of 'climbing boys'. A double chimney immediately opposite my bedroom has 24 pots, and when the sun rises at the entrance of Westbourne Grove, which has a mathematical east-west alignment, this double-dozen profile of pots casts a perfect shadow on the adjoining wall.

By contrast, American rooftop views scarcely feature chimneys or pots at all. A working fireplace is regarded as a luxury in the US, and appears in real-estate advertisements: 'Six beds, eight-and-a-half baths, four fireplaces' etc. One minor reason why I enjoy Laurel and Hardy movies so much (I own an almost complete video collection) is that, to save money, many sequences were shot in downtown Los Angeles, and some of the characteristics of this strange city as it was in the late Twenties or early Thirties emerge strongly. In Dirty Work, the grandiose house of Professor Noodle, who is trying to discover the secret of rejuvenation, has only one fireplace. When the pair, as visiting chimney-sweeps, ask where it is, the butler Jessop directs them to the adjoining room, adding condescendingly, 'You will see it because it is leaning against the wall.' In due course Hardy finds it necessary to go up to the roof, or 'ruff' as he pronounces it. Before he demolishes the lone chimney stack, covering the house in soot and allowing the sombre Jessop his withering line, 'Somewhere, an electric chair is waiting,' we get tantalising glimpses of the LA roofscape as it was when Hoover, who came from California, was still clinging to the White House.

But there is nothing to beat the New York roofscape when you can, as it were, visually get at it. Last week I had a magnificent opportunity, from the windows of my 11thfloor suite in the Hotel Pierre. (What was I doing there, in a suite? The intriguing explanation will have to await another occasion.) The Big Apple skyline, on a perfect autumn day, was indeed Hamlet's `majestical roof fretted in golden fire', but what in fact happens on the tops of New York buildings is not poetry but idiosyncratic prose. If the London roof is about pots, New York expresses individualism. I looked down on peculiar gadgets of all kinds, of metal, wood, plastic, do-ityourself gizmos of mysterious purpose, with little wheels, spinning furiously as Hurricane Isabel approached the Carolinas. There were tiny huts, cupolas and home-made domes, canopies and awnings, architectural skullcaps, pallets or testers, each unique and treasured, sometimes accompanied by strips of turf, flower borders, trees or shrubs in pots, even a tiny fountain or two, playing jets in the wind. The colours were myriad: firebucket red, eau de Nil, ochre, smouldering umber, fortified turquoise, bilious concrete, Schiaparelli pink. From one of the huts or skylights, a lithe figure emerged in bikini thong and halter top, and began to do vigorous exercises, high kicks and so forth, like the girl in Hitchcock's Rear Window. When she realised she was observed, she stopped, considered, removed her halter, and recommenced her callisthenics with redoubled vigour. But when, on an adjoining roof, two storeys higher, a man in magenta overalls emerged with a watering can, she closed down the show instantly and returned to her mechanism, like Noah's wife in a Swiss clock. The presence of so much foliage and leaf, so many blooms, attracting flights of birds too small to identify, in the supposedly rocky and brick desert of Manhattan, filled me with joy and made me, in the words of Milton's II Penseroso, 'love the high embowered roof'.

Roofscapes tell the changing story of history as well as any other view — better, perhaps. One of my treasures is a beautiful drawing of Canterbury done by my father just before the Munich crisis of 1938. He was a pupil of Muirhead Bone, 'the British Piranesi' as Kenneth Clark called him, who loved to position a great edifice in its rooftop setting. For the drawing my father must have scrambled to the top of a four-storey building, long since demolished, to present the Cathedral as it then was, absolutely dominant in a town where hardly any structures had more than two storeys, and only the various parish churches were of any significance, clustering attentively at the feet of their great mother

minster. This paramountcy has now totally gone, and Canterbury has lost its distinction, like most other cathedral cities (Lincoln is an exception). My father's drawing is thus a historical document.

Painting rooftops is an old device of artists kept indoors by inclement weather or too idle to get together their clobber and set up in the open countryside. The vast reconstruction of Paris under Napoleon III and his prefect meant that, in the 1870s, many artists occupied lofty ateliers and gave us skyscapes and roofs in snow and rain, slush and showers, with Pissarro, who could make anything look interesting, in the lead. There was another crop between the wars, in England, when the Euston Road school (as it used to be called) painted London at secondor third-floor level, just in time before the Blitz, high-rises, the age of concrete, municipal philistinism and the abyss of architecture in the Fifties and Sixties destroyed all the rooftop delights of the Georgian city.

You can still paint glorious rooftop views of classical, Renaissance and baroque Rome, as I hope to do in November when I plan to stay outside the city in a palatial elysium. But in Naples it is, I think, no longer fruitful. All the more reason, then, to welcome the rediscovered work of Thomas Jones (1742-1803), which will be shown at the National Gallery in November. He came from Pencerrig, the younger son of a landed family, and trained under Richard Wilson to make his living as an artist. He went to Italy and in the 1780s settled in Emma Hamilton's Naples. Whether he could not bear the hot sun or from the sheer peculiarity of his genius, he painted a magnificent series of oils, mainly on paper, from under the awning of his roof terrace in the Dogana del Ala, which is near the Castel Nuovo.

This might seem an unpromising idea, and Jones keyed it even lower by limiting his palette to various shades of white and chrome, discreet pale-orange and rose, with dusky grey-blue skies and patches of deep olive green. Even his shadows are subtle and underplayed. But he paints the surface of a whitewashed, pitted and scratched wail as though it were the living flesh of a beautiful woman, endowing it with an eirenic spirituality which is profoundly attractive. Not a human figure in sight, not even a cat; no movement, except the occasional fluttering of rags put out to dry at a window. A strange but powerful vision of beauty, reinforcing my view that a rooftop is an art world of its own.