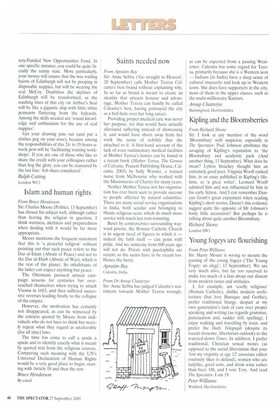 From Bruce Henderson Sir: Charles Moore (Politics, 13 September) has chosen his subject well, although rather than fearing the religion in question, I think wariness, alertness and preparedness when dealing with it would be far more appropriate.

Moore mentions the frequent statement that this is 'a peaceful religion' without pointing out that such peace refers to the Dar ul-Islam (Abode of Peace) and not to the Dar ul-Harb (Abode of War), which is the rest of the planet. So inhabitants of the latter can expect anything but peace.

The Ottomans pursued annual campaign seasons for centuries but overreached themselves when trying to attack Vienna in 1683, and then suffered successive reverses leading finally to the collapse of the empire.

However, the motivation has certainly not disappeared, as can be witnessed by the extracts quoted by Moore from individuals who do not have to think but merely repeat what they regard as unalterable (for all time) laws.

The time has come to call a spade a spade and to identify exactly what is meant by quoted text from the religious sources. Comparing such meaning with the UN's Universal Declaration of Human Rights would be a very good place to begin, starting with Article 18 and then the rest.