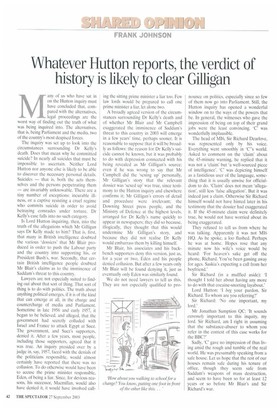 Page 42, 27 September 2003 — Whatever Hutton reports, the verdict of history is likely to dear Gilligan
Close

Whatever Hutton reports, the verdict of history is likely to dear Gilligan

Many of us who have sat in on the Hutton inquiry must have concluded that, compared with the alternatives, legal proceedings are the worst way of finding out the truth of what was being inquired into. The alternatives. that is. being Parliament and the media, two of the country's most despised forces.

The inquiry was set up to look into the circumstances surrounding Dr Kelly's death. Does that mean why he committed suicide? In nearly all suicides that must be impossible to ascertain. Neither Lord Hutton nor anyone else is likely to be able to discover the necessary personal details. Suicides — that is, both the acts themselves and the persons perpetrating them — are invariably unknowable. There are a tiny number of exceptions: incurable illness, or a captive resisting a cruel regime who commits suicide in order to avoid betraying comrades under torture. Dr Kelly's case falls into no such category.

Is Lord Hutton inquiring, then, into the truth of the allegations which Mr Gilligan says Dr Kelly made to him? That is, first, that many in British intelligence doubted the various 'dossiers' that Mr Blair produced in order to push the Labour party and the country into supporting his, or President Bush's. war. Secondly, that certain British intelligence people doubted Mr Blair's claims as to the imminence of Saddam's threat to this country.

Lawyers are not especially suited to finding out about that sort of thing. That sort of thing is to do with politics. The truth about anything political emerges. if it is of the kind that can emerge at all, in the charge and countercharge of media and Parliament. Sometime in late 1956 and early 1957, it began to be believed, and alleged, that the government had secretly colluded with Israel and France to attack Egypt at Suez. The government, and Suez's supporters, denied it. After a few years, most people, including those supporters, agreed that it was true. An inquiry presided over by a judge in, say, 1957, faced with the denials of the politicians responsible, would almost certainly have reported that there was no collusion. To do otherwise would have been to accuse the prime minister responsible, Eden, of being a liar. Since, for devious reasons, his successor, Macmillan, would also have denied it, it would have involved call ing the sitting prime minister a liar too. Few law lords would be prepared to call one prime minister a liar, let alone two.

A broadly agreed version of the circumstances surrounding Dr Kelly's death and of whether Mr Blair and Mr Campbell exaggerated the imminence of Saddam's threat to this country in 2003 will emerge in a few years' time, perhaps sooner. It is reasonable to suppose that it will be broadly as follows: the reason for Dr Kelly's suicide cannot be known, but it was probably to do with depression connected with his being revealed as Mr Gilligan's source; even if he was wrong to say that Mr Campbell did the 'sexing up' personally, Mr Gilligan's story that the relevant dossier was 'sexed up' was true, since testimony to the Hutton inquiry and elsewhere confirms it; Mr Gilligan's errors of detail and procedure were irrelevant; the Downing Street press people, and the Ministry of Defence at the highest levels, arranged for Dr Kelly's name quickly to appear in newspapers; they did so because, illogically, they thought that this would undermine Mr Gilligan's story, and because they did not realise Dr Kelly would embarrass them by killing himself.

Mr Blair, his associates and his backbench supporters deny this version, just as, for a year or two, Eden and his people denied collusion. But after a few years only Mr Blair will be found denying it, just as eventually only Eden was similarly found.

We do not need lawyers to tell us this. They are not especially qualified to pro flounce on politics, especially since so few of them now go into Parliament. Still, the Hutton inquiry has opened a wonderful window on to the ways of the powers that be. In general, the witnesses who gave the impression of being on top of their grand jobs were the least convincing. 'C' was wonderfully implausible.

The head of MI6, Sir Richard Dearlove, was represented only by his voice. Everything went smoothly in `C"s world. Asked to comment on the 'claim' about the 45-minute warning, he replied that it was not a 'claim' but 'a well-sourced piece of intelligence'. 'C' was depicting himself as a fastidious user of the language, something that it is usually unwise for officialdom to do. 'Claim' does not mean 'allegation', still less 'false allegation'. But it was indeed just a claim. Otherwise Sir Richard himself would not have hinted later in his testimony that the dossier had exaggerated it. If the 45-minute claim were definitely true, he would not have worried about its being exaggerated.

They refused to tell us from where he was talking. Apparently it was not MI6 HQ. As he spoke, a loo flushed. Perhaps he was at home. Hopes rose that any minute now his wife's voice would be heard: 'For heaven's sake get off the phone, Richard. You've been gassing away for ages. Saskia's expecting a call from her boyfriend.'

Sir Richard (in a muffled aside): 'I thought I told her about having any more to do with that cocaine-snorting layabout.'

Lord Hutton: 'I beg your pardon, Sir Richard. To whom are you referring?'

Sir Richard: 'No one important, my lord.'

Mr Jonathan Sumption QC: 'It sounds extremely important to this inquiry, my lord. Sir Richard, am I right in assuming that the substance-abuser to whom you refer in the context of this case works for the BBC?'

Sadly, 'C' gave no impression of thus living amid the rough and tumble of the real world. He was presumably speaking from a safe house. Let us hope that the rest of our houses remain safe during his tenure of office, though they seem safe from Saddam's weapons of mass destruction, and seem to have been so for at least 12 years or so before Mr Blair's and Sir Richard's war.