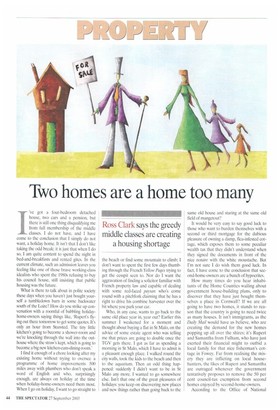 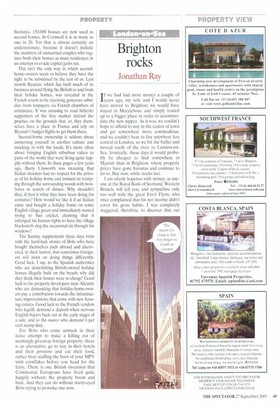 Two homes are a home too many

1 'ye got a four-bedroom detached house, two cars and a pension, but there is still one thing disqualifying me from full membership of the middle classes. I do not have, and I have come to the conclusion that I simply do not want, a holiday home. It isn't that I don't like taking the odd break; it is just that when I do so, I am quite content to spend the night in bed-and-breakfasts and rented gites. In the current climate, such an admission leaves you feeling like one of those brave working-class idealists who spent the 1980s refusing to buy his council house, still insisting that public housing was the future.

What is there to talk about in polite society these days when you haven't just bought yourself a tumbledown barn in some backwater south of the Loire? How do you strike up conversation with a roomful of babbling holidayhome-owners saying things like, 'Rupert's flying out there tomorrow to get some quotes. It's only an hour from Stansted. The tiny little kitchen's going to become a shower-room and we're knocking through the wall into the outhouse where the straw's kept, which is going to become a big new kitchen-cum-dining-room.'

I find it enough of a chore looking after my existing home without trying to oversee a programme of home improvements 500 miles away with plumbers who don't speak a word of English and who, surprisingly enough. are always on holiday at the time when holiday-home-owners need them most. When I go on holiday, I want to go straight to the beach or find some mountain to climb; I don't want to spent the first few days thumbing through the French Yellow Pages trying to get the cesspit seen to. Nor do I want the aggravation of finding a solicitor familiar with French property law and capable of dealing with some red-faced paysan who's come round with a pitchfork claiming that he has a right to drive his combine harvester over the bit where you park your car.

Who, in any case, wants to go back to the same old place year in, year out? Earlier this summer I weakened for a moment and thought about buying a flat in St Male, on the advice of some estate agent who was telling me that prices are going to double once the TGV gets there. I got as far as spending a morning in St Malo, which I have to admit is a pleasant enough place. I walked round the city walls, took the kids to the beach and then to the aquarium. Then an odd thing happened: suddenly I didn't want to be in St Maio any more. I wanted to go somewhere else. Isn't that one of the great pleasures of holidays: you keep on discovering new places and new things rather than going back to the same old house and staring at the same old field of mangetout?

It would be very easy to say good luck to those who want to burden themselves with a second or third mortgage for the dubious pleasure of owning a damp, flea-infested cottage, which exposes them to some peculiar wealth tax that they didn't understand when they signed the documents in front of the nice notaire with the white moustache. But I'm not sure I do wish them good luck. In fact. I have come to the conclusion that second-home-owners are a bunch of hypocrites.

How many times do you hear inhabitants of the Home Counties wailing about government house-building plans, only to discover that they have just bought themselves a place in Cornwall? If we are all going to have two homes, it stands to reason that the country is going to need twice as many houses. It isn't immigrants, as the Daily Mail would have us believe, who are creating the demand for the new homes popping up all over the shires: it's Rupert and Samantha from Fulham, who have just exerted their financial might to outbid a local family for that nice fisherman's cottage in Fowey. Far from realising the misery they are inflicting on local househunters, the likes of Rupert and Samantha are outraged whenever the government tentatively proposes to remove the 50 per cent council-tax exemption from second homes enjoyed by second-home-owners.

According to the Office of National Statistics, 150,000 houses are now used as second homes. In Cornwall it is as many as one in 20. Yet that is almost certainly an underestimate, because it doesn't include the numbers of unmarried couples who register both their homes as main residences in an attempt to evade capital gains tax.

This isn't the only way in which secondhome-owners seem to believe they have the right to be subsidised by the rest of us. Last month Ryanair, which has built much of its business around flying the British to and from their holiday homes, was revealed in the French courts to be receiving generous subsidies from taxpayers via French chambers of commerce. It was amusing to read hitherto supporters of the free market defend the practice on the grounds that, er, they themselves have a place in France and rely on Ryanair's budget flights to get them there.

Second-home ownership is seldom about immersing yourself in another culture and mucking in with the locals. It's more often about bringing English suburban values to parts of the world that were living quite happily without them, In these pages a few years ago, Barry Unsworth was moaning that Italian shooters had no respect for the privacy of his holiday home and insisted on tramping through the surrounding woods with twinbores in search of dinner. Why shouldn't they, if that is what they have been doing for centuries? How would we like it if an Italian came and bought a holiday home on some English village green and immediately started trying to ban cricket, claiming that it infringed his human rights to have the village blacksmith slog the occasional six through his windows?

The Sunday supplements these days brim with the hard-luck stories of Brits who have bought themselves pads abroad and discovered, to their horror, that sometimes foreigners will insist on doing things differently. Good luck, I say, to the Spanish authorities who are demolishing British-owned holiday homes illegally built on the beach; why did they think their homes were so cheap? Good luck to the property developers near Alicante who are demanding that holiday-home-owners pay a contribution towards the infrastructure improvements that come with new housing estates. Good luck to the French vendors who legally demand a deposit when nervous English buyers back out at the early stages of a sale, and to the maires who demand 6 per cent stamp duty.

For Brits who come unstuck in their naive attempt to make a killing out of seemingly giveaway foreign property, there is an alternative: go to stay in their hotels and their pensions and eat their food, rather than stuffing the boot of your MPV with cornflakes before you head for the ferry. There is one British invention that Continental Europeans have lived quite happily without: the property boom and bust. And they can do without starry-eyed Brits trying to provoke one now.