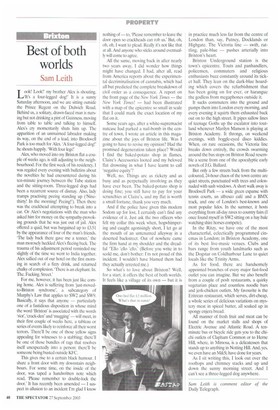 Best of both worlds

Took! Look!' my brother Alex is shouting. d It's a four-legged dog!' It is a sunny Saturday afternoon, and we are sitting outside the Prince Regent on the Dulwich Road, Behind us, a solitary, drawn-faced man is nursing but not drinking a pint of Guinness, moving from table to table and talking to himself. Alex's cry momentarily shuts him up. The apparition of an unmaimed labrador making its way, on the end of a lead, into Brockwell Park is too much for Alex. 'A four-leed dog!' he shouts happily. 'With four legs!'

Alex, who moved into my Brixton flat a couple of weeks ago, is still adjusting to the neighbourhood. For the first week of his residency, I was regaled every evening with bulletins about the novelties he had encountered during his ten-minute journey between the Tube station and the sitting-room. Three-legged dogs had been a recurrent source of dismay. Also, lady tramps practising peeing standing up (Ninethirty! In the morning! Peeing!). Then there was the crackhead attempting to break into a car. Or Alex's negotiations with the man who asked him for money on the sympathy-provoking grounds that he was just out of jail. Alex offered a quid, but was bargained up to £3.51 by the appearance of four of the man's friends. 'The lady back there gave me a termer: the man morosely heckled Alex's fleeing back. The trauma of his adjustment period reminded me slightly of the time we went to India together. Alex sallied out of our hotel on the first morning in search of a fizzy drink, and returned chalky of complexion. 'There is an elephant. In. The. Fucking. Street.'

For me, however, it has been just like coming home. Alex is suffering from `just-movedto-Brixton syndrome', a subcategory of Murphy's Law that applies to SW2 and SW9.

Basically, it says that anyone particularly one of a fastidious disposition in whose mind the word 'Brixton' is associated with the words 'riot', 'crack-den' and 'mugging' — will meet, in their first couple of weeks here, a tableau or series of events likely to reinforce all their worst terrors. There'll be one of those yellow signs appealing for witnesses to a stabbing; there'll be one of those bundles of rags that resolves itself unexpectedly into a person; there'll be someone being busted outside KFC.

This gives rise to a certain black humour. I share a front door with my downstairs neighbours. For some time, on the inside of the door, was taped a handwritten note which read, 'Please remember to double-lock the door.' It has recently been amended — I suspect in allusion to an incident I'm glad t know

nothing of— to, 'Please remember to leave the door open so crackheads can rob us.' But, oh, oh, oh, I want to plead. Really it's not like that at all. And anyone who sticks around eventually will come to agree.

All the same, moving back in after nearly two years away, I did wonder how things might have changed. I had, after all, read from America reports about the experimental decriminalisation of cannabis, which had all but predicted the complete breakdown of civil order as a consequence. A report on the front page of the New York Times — the New York Times! — had been illustrated with a map of the epicentre so small in scale that I could mark the exact location of my flat on it,

Some years ago, after a white-supremacist nutcase had parked a nail-bomb in the centre of town, I wrote an article in this magazine about the joys of Brixton life. Was I going to have to revise my opinion? Had the promised degeneration taken place? Would I find the baked-potato shop in flames, Claire's Accessories looted and my beloved flat drowning in what I have learnt to call 'negative equity'?

Well, no. Things are as rickety and as busy and as perpetually involving as they have ever been. The baked-potato shop is doing fine; you still have to pay for your scrunchies at Claire's, and my flat is worth a small fortune, thank you very much.

And if the police have given this modern Sodom up for lost, I certainly can't find any evidence of it. Just ask the two officers who felt my collar this week when, hogwhimpering and caught agonisingly short, I let go at the mouth of an untenanted alleyway in a deserted backstreet. Out of nowhere came the firm hand at my shoulder and the dreadful "Ello 'ello 'ello.' (Before you write in to scold me, don't bother: I'm not proud of this incident. I wouldn't have blamed them had they actually arrested me.) So what's to love about Brixton? Well, for a start, it offers the best of both worlds. It feels like a village of its own — but it is in practice much less far from the centre of London than. say, Putney, Docklands or

Brixton Underground station is the town's epicentre. Touts and panhandlers, policemen, commuters and religious enthusiasts buzz constantly around its ticket hall. They lean on the dark-blue hoarding which covers the refurbishment that has been going on for ever, or harangue the godless from megaphones outside it.

It sucks commuters into the ground and pumps them into London every morning, and every evening it squirts them exhausted back out on to the high street. It pipes sallow lines of teenage Goths up the escalator into toutland whenever Marilyn Manson is playing at Brixton Academy. It throngs, on weekend evenings, with boggle-eyed disco kiddies. When, on rare occasions, the Victoria line breaks down entirely, the crowds swarming around the bus stops on Brixton Road resemble a scene from one of the apocalyptic early novels of J.G. Ballard.

But only a few streets back from the multicoloured, 24-hour chaos of the town centre are quiet streets, punctuated with trees and colonnaded with sash windows. A short walk away is Brockwell Park — a wide green expanse with tennis courts, an alfresco cafd and a BMX track, and one of London's best-known and most popular lidos. In the summer, it hosts everything from all-day raves to country fairs (I once found myself in SW2 sitting on a hay bale watching shire horses compete).

In the Ritzy. we have one of the most characterful, eclectically programmed cinemas in London; in Brixton Academy, one of its best live-music venues. Clubs and bars range from youth landmarks such as the Dogstar on Coldharbour Lane to quiet locals like the Trinity Arms.

As for food, there are handsomely appointed branches of every major fast-food outlet you can imagine. But we also benefit from a couple of posh restaurants, a quirky vegetarian place and countless noodle bars and jerk-chicken outlets. My favourite is the Eritrean restaurant, which serves, dirt-cheap, a whole series of delicious variations on mystery meat in spiced butter, all soaked up in spongy enjera bread.

All manner of fresh fruit and meat can be found on the market stalls and shops of Electric Avenue and Atlantic Road. A tenminute bus or bicycle ride gets you to the chichi outlets of Clapham Common or to Herne Hill, where. in Mimosa, is a delicatessen that stands up to anything in Notting Hill. And, yes, we even have an M&S have done for years.

As I sit writing this, I look out over the rooftops and chimney stacks and up and down the sunny morning street. And I can't see a three-legged dog anywhere.

Sam Leith is comment editor of the Daily Telegraph.