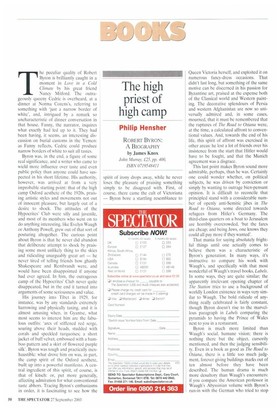 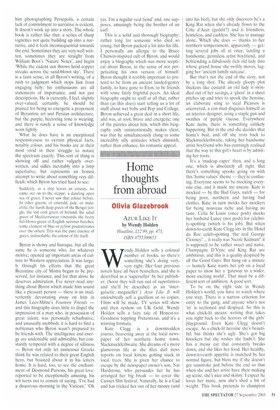 The high priest of high camp

The peculiar quality of Robert Byron is brilliantly caught in a moment in Love in a Cold Climate by his great friend Nancy Mitford. The outrageously queeny Cedric is overheard, at a dinner at Norma Cozens's, referring to something with 'just a narrow border of white', and, intrigued by a remark so uncharacteristic of dinner conversation in that house, Fanny, the narrator, inquires what exactly had led up to it. They had been having, it seems, an interesting discussion on burial customs in the Yemen: as Fanny reflects, Cedric could produce narrow borders of white to suit all tastes.

Byron was, in the end, a figure of some real significance, and a writer who came to wield more influence over taste and even public policy than anyone could have suspected in his short lifetime. His authority, however, was arrived at from a very improbable starting point: that of the high camp Oxford aesthete of the 1920s, praising artistic styles and movements not out of innocent pleasure, but largely out of a desire to shock. The attitudes of the Hypocrites' Club were silly and juvenile, and most of its members who went on to do anything interesting, like Evelyn Waugh or Anthony Powell, grew out of that sort of posturing altogether. The curious point about Byron is that he never did abandon that deliberate attempt to shock by praising some most unlikely thing to the skies and ridiculing unarguably great art — he never tired of telling friends bow ghastly Shakespeare and Rembrandt were, and would have been disappointed if anyone had ever agreed. In him, the outrageous camp of the Hypocrites' Club never quite disappeared, but in the end it turned into arguments of some seriousness and value. His journey into Tibet in 1929, for instance, was by any standards extremely harrowing and physically taxing, and it is almost amusing when, in Gyantse, what most seems to interest him are the fabulous outfits: 'arcs of stiffened red serge, soaring above their heads, studded with corals and speckled turquoises; a short jacket of buff velvet, embossed with a bamboo pattern and a skirt of flowered purple silk'. Byron was tough and practically inexhaustible: what drove him on was, in part, the camp spirit of the Oxford aesthete, built up into a powerful manifesto. A central ingredient of this spirit, of course, is that of kitsch: or, put more generally, affecting admiration for what conventional taste abhors. Tracing Byron's enthusiasms in order, it is fascinating to see how the spirit of irony drops away, while he never loses the pleasure of praising something simply to be disagreed with. First, of course, there came the cult of Victoriana — Byron bore a startling resemblance to Queen Victoria herself, and exploited it on numerous fancy-dress occasions. That didn't last long, but something of the same motive can be discerned in his passion for Byzantine art, praised at the expense both of the Classical world and Western painting. The decorative splendours of Persia and western Afghanistan are now so universally admired and, in some cases, mourned, that it must be remembered that the raptures of The Road to Oxiana were, at the time, a calculated affront to conventional values. And, towards the end of his life, this spirit of affront was exercised in other areas: he lost a lot of friends over his insistence from the start that Hitler would have to be fought, and that the Munich agreement was a disgrace. This last point makes Byron sound more admirable, perhaps, than he was. Certainly one could wonder whether, on political subjects, he was driven by conviction or simply by wanting to outrage bien-pensant opinion. It is difficult to reconcile that principled stand with a considerable number of openly anti-Semitic jibes in The Road to Oxiana, some directed towards refugees from Hitler's Germany. The third-class quarters on a boat to Jerusalem are horribly overcrowded, tut the fares are cheap; and being Jews, one knows they could all pay more if they wanted'. That mania for saying absolutely frightful things until one actually comes to believe them was a characteristic of Byron's generation. In many ways, it's instructive to compare his work with Waugh's, and specifically with that most wonderful of Waugh's travel books, Labels. In some ways, they are quite similar; the apparently irrelevant opening chapter of The Station tries to use a background of worldly London existence in ways very similar to Waugh. The bold ridicule of anything really celebrated is fairly constant, though Byron doesn't rise to the marvellous paragraph in Labels comparing the pyramids to having the Prince of Wales next to you in a restaurant. Byron is much more limited than Waugh's social, humane vision; there is nothing there but the object, cursorily mentioned, and then the judging sensibility. Even in a book as good as The Road to Oxiana, there is a little too much judgment, forever giving buildings marks out of ten almost before they have been described. The human drama is much more desultory than Waugh's encounters: if you compare the American professor in Waugh's Abyssinian volume with Byron's run-in with the German who tried to stop him photographing Persepolis, a certain lack of commitment to narrative is evident, It doesn't work up into a story. The whole book is rather like that: a series of sharp vignettes not quite building up into a narrative, and it feels inconsequential towards the end. Sometimes they are very well written, sometimes they are straight from William Boot's 'Nature Notes', and begin 'While the cadent sun throws lurid copper streaks across the sand-blown sky'. There is a faint sense, in all Byron's writing, of a rush to judgment which stops him from engaging fully: his enthusiasms are all statements of importance, and not just descriptions. He is currently, I feel, slightly over-valued; certainly, he should be praised for being so energetic a proponent of Byzantine art and Persian architecture, but the purple, hectoring tone is wearing, and there is rarely a sense of knowledge worn lightly.

What he does have is an exceptional responsiveness to certain physical facts, notably colour, and his books are at their most vivid in their struggle to notate the spectrum exactly. This sort of thing is showing off and rather vulgarly overwritten, and sidles inevitably into a limp superlative, but represents an honest attempt to write about something very difficult, which Byron has tried hard to see:

Suddenly, as a ship leaves an estuary, we came out on to the steppe: a dazzling open sea of green. I never saw that colour before. In other greens. of emerald, jade, or malachite, the harsh deep green of the Bengal jungle, the sad cool green of Ireland, the salad green of Mediterranean vineyards, the heavy full-blown green of English summer beeches, some element of blue or yellow predominates over the others. This was the pure essence of green, indissoluble, the colour of life itself.

Byron is showy and baroque, but all the same he is someone who, for whatever motive, opened up important areas of culture to Western appreciation. It was largely through his efforts that the great Byzantine city of Mistra began to be preserved, for instance, and for that alone he deserves admiration. I've never read anything about Byron which made him sound like a pleasant person — there is an inadvertently devastating essay on him in James Lees-Milne's Fourteen Friends — and this biography does little to dispel the impression of a man who, in possession of great talent, was personally rebarbative, and unusually snobbish: it is hard to find a nobleman who Byron wasn't prepared to be friends with. The intelligence and energy are undeniable and admirable, but constantly tempered with a degree of silliness — Byron not only let numerous Greeks think he was related to their great English hero, but boasted about it in his letters home. It is hard, too, to see the enchantment of Desmond Parsons, his great love: reported to be exceptionally amusing, his wit turns out to consist of saying, 'I've had a disastrous morning in the Vatican,' Oh yes. I'm a regular veal fiend' and, one supposes, amusingly being the brother of an earl.

This is a solid and thorough biography: rather long for someone who died so young, but Byron packed a lot into his life. I personally am allergic to the Bruce Chatwin-inspired cult of Byron, and would enjoy a biography which was more sceptical about Byron, in the sense of not perpetuating his own version of himself. Byron thought it terribly important to pretend to be from an ancient landed-gentry family, to have gone to Eton, to be friends with some fairly frightful peers. An ideal biography ought to scoff at all that, rather than (as this does) start telling us a lot of stuff about wet bobs and Pop and College. Byron achieved a great deal in a short life, and was, at root, brave and energetic; one of the puzzles about him, which this biography only unintentionally makes clear, was that he simultaneously clung to some incredibly silly attitudes which diminish, rather than enhance, his romantic appeal.