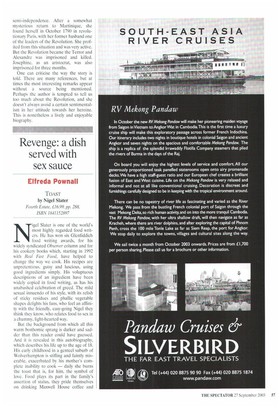 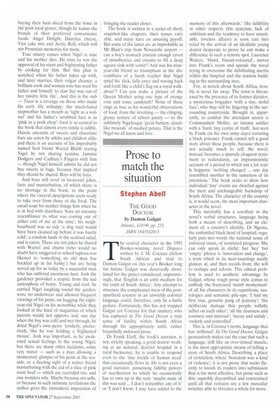 Nigel Slater is one of the world's most highly regarded food writers. He has won six Glenfiddich food writing awards, for his widely syndicated Observer column and for his cookery books which, starting in 1992 with Real Fast Food, have helped to change the way we cook. His recipes are unpretentious, gutsy and luscious, using good ingredients simply. His voluptuous descriptions of an ingredient have been widely copied in food writing, as has his unabashed celebration of greed. The mild sexual innuendo of his style, with its relish of sticky residues and phallic vegetable shapes delights his fans, who feel an affinity with the friendly, easy-going Nigel they think they know, who relates food to sex in a chummy, light-hearted way.

But the background from which all this warm bonhomie sprang is darker and sadder than this reader could have guessed. And it is revealed in this autobiography, which describes his life up to the age of 18. His early childhood in a genteel suburb of Wolverhampton is stifling and faintly miserable, exacerbated by his mother's complete inability to cook — daily she burns the toast that is, for him, the symbol of love. Food plays its part in the family's assertion of status, they pride themselves on drinking Maxwell House coffee and buying their ham sliced from the bone in the posh local grocer, though he names the brands of their preferred convenience foods: Angel Delight, Dairylea cheese, Viot cake mix and Arctic Roll, which will stir Proustian memories for many.

True misery comes when Nigel is nine and his mother dies. He tries to win the approval of his stern and frightening father by cooking for him. But this plan is scotched when his father takes up with, and later marries, their vulgar cleaner, a brilliant cook and woman who has used his father and himself `to claw her way out of her tawdry little life'. And this is the nub — Toast is a revenge on those who made his early life unhappy; the much-hated stepmother has a mouth as 'tight as a walnut' and his father's scrubbed face is as 'pink as a pork chop': food is so central to the book that almost every simile is edible. Heroic amounts of sweets and chocolate bars are eaten by adults and children alike and there is an account of his improbably named best friend Warrel Blubb teasing Nigel by not sharing teatime Jammie Dodgers and Cadbury's Fingers with him — though Nigel himself admits he did not buy sweets in bags, because that implied they should be shared. Boys will be boys.

And boys will revel in lavatorial jokes, farts and masturbation, of which there is no shortage in the book, to the point where the visceral descriptions seem ready to take over from those of the food. The oxtail soup his mother brings him when he is in bed with diarrhoea 'bore an uncanny resemblance to what was coming out of either end of me at the time': his neighbourhood was so tidy 'a dog turd would have been cleaned up before it was barely cold': a condom lands in the seafood salad, and is eaten. These are not jokes he shared with Warrel and chums (who would no doubt have sniggered as school tapioca was likened to 'something an old man has hockled up in his hanky') but are being served up for us today by a successful man who has suffered enormous hurt. Josh the gardener provided a respite from the sad atmosphere of home. Young and cool, he carried Nigel laughing round the garden, wore no underwear and allowed frequent viewings of his penis, sat hugging the eightyear-old Nigel on his motorbike while they looked at the kind of magazines of which parents would not approve and, one day when the boy was cold and wet through, he dried Nigel's own penis tenderly, protectively, like he was holding a frightened mouse'. Josh was important, as he awakened sexual feelings in the young Nigel, but there are many other incidents, some very minor — such as a man allowing a momentary glimpse of his penis at the seaside, or a fleeting sight of a waiter friend masturbating with the aid of a slice of pink roast beef — which are recorded too, and one wonders why. Maybe because sex sells, or because in such intimate revelations the author gives the (mistaken) impression of bringing the reader closer.

The book is written in a series of short, snapshot-like chapters, their tenses variable, and many have an amusing payoff. But some of the latter are as improbable as Mr Blair's trip from Newcastle airport — can a boy's stomach contain enough (even of strawberries and cream) to fill a deep square sink with vomit? And was his nineyear-old friend so triumphant at the discomfiture of a harsh teacher that Nigel spied his 'dick, fully erect and waving back and forth like a child's flag on a royal walkabout'? Can you make a picture of the Queen Mother using one type of orange rose and some candytuft? None of these rings as true as his wonderful observations of food, from the revolting — the clinging, greasy texture of school pastry — to the sublimely Nigelesque 'great buttery, cloudlike mounds' of mashed potato. That is the Nigel we all know and love.