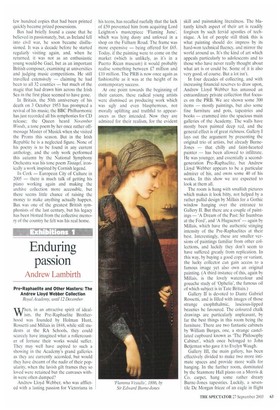 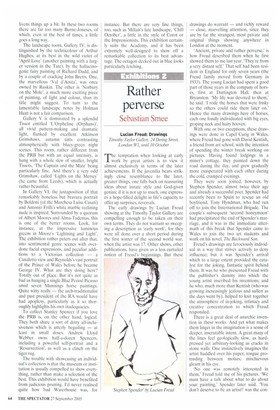 Pre-Raphaelite and Other Masters: The Andrew Lloyd Webber Collection Royal Academy, until 12 December

When, in an attractive spirit of idealism. the Pre-Raphaelite Brotherhood was founded by Holman Hunt, Rossetti and Millais in 1848, while still students at the RA Schools, they could scarcely have imagined what a rollercoaster of fortune their works would suffer. They may well have aspired to such a showing in the Academy's grand galleries as they are currently accorded, but would they have dreamt of the nadir of their popularity, when the lavish gilt frames they so loved were retained but the canvases within were often dumped?

Andrew Lloyd Webber, who was afflicted with a lasting passion for Victoriana in his teens, has recalled ruefully that the lack of £50 prevented him from acquiring Lord Leighton's masterpiece 'Flaming June', which was lying dusty and unloved in a shop on the Fulham Road. The frame was more expensive — being offered for £65. Today, if the painting were to come on the market (which is unlikely, as it's in a Puerto Rican museum) it would probably realise something between £7 million and £10 million. The PRB is now once again as fashionable as it was at the height of its contemporary success.

At one point towards the beginning of their careers, these radical young artists were dismissed as producing work which was ugly and even blasphemous, not morally uplifting and truthful to appearances as they intended. Now they are admired for their realism, for the evident skill and painstaking literalness. The blatantly kitsch aspect of their art is readily forgiven by such fervid apostles of technique. A lot of people still think this is what painting should do: impress by its hard-won technical fluency, and mirror the world around us. It's the kind of art which appeals particularly to adolescents and to those who have never really thought about what art is or could be. Some of it is also very good, of course. But a lot isn't.

In four decades of collecting, and with increasing financial reserves to draw upon, Andrew Lloyd Webber has amassed an extraordinary private collection that focuses on the PRB. We are shown some 300 items — mostly paintings, but also some fine furniture and pots, tapestries and books — crammed into the spacious main galleries of the Academy. The walls have mostly been painted deep red, and the general effect is of great richness. Gallery I lays out the argument by presenting the original trio of artists, but already BurneJones — that chilly and faint-hearted painter — has been allowed to infiltrate. He was younger, and essentially a secondgeneration Pre-Raphaelite, but Andrew Lloyd Webber appears to be a particular admirer of his, and owns some 40 of his works. In this show we are expected to look at them all.

The room is hung with smallish pictures which makes it look bitty, not helped by a rather pallid design by Millais for a Gothic window hanging over the entrance to Gallery II. But there are a couple of paintings — 'A Dream of the Past: Sir Isumbras at the Ford', and 'A Huguenot' — again by Millais, which have the authentic stinging intensity of the Pre-Raphaelites at their best. Interestingly, these are smaller versions of paintings familiar from other collections, and luckily they don't seem to have suffered greatly from replication. In this way, by buying a good copy or variant, the lucky collector can gain access to a famous image yet also own an original painting. (A third instance of this, again by Millais, is the lovely watercolour and gouache study of `Ophelia', the famous oil of which subject is in Tate Britain.) Gallery II is devoted to Dante Gabriel Rossetti, and is filled with images of those strange exophthalmic, luscious-lipped beauties he favoured. The coloured chalk drawings are particularly unpleasant, by far the best things in this room being the furniture. There are two fantastic cabinets by William Surges, one, a strange castellated cupboard known as 'The Philosophy Cabinet', which once belonged to John Betjeman who gave it to Evelyn Waugh.

Gallery III, the main gallery, has been effectively divided to make two more intimate spaces and provide more walls for hanging. In the further room, dominated by the Stanmore Hall piano on a Morris & Co. carpet. hang some rather dreary Burne-Jones tapestries. Luckily, a seventile De Morgan frieze of an eagle in flight livens things up a bit. In these two rooms there are far too many Burne-Joneses, of which, even at the best of times, a little goes a long way.

The landscape room, Gallery IV, is distinguished by the technicolour of Arthur Hughes, at its best in the wild violet of 'April Love' (another painting with a larger version in the Tate), by the hallucinogenic fairy painting of Richard Dadd, and by a couple of cracking John Bretts. One, the marvellous 'Val d'Aosta', was once owned by Ruskin. The other is 'Norbury on the Mole', a much more exciting piece of painting, of light and colour, than its title might suggest. To turn to the lamentable landscape notes by Holman Hunt is not a fair comparison.

Gallery V is dominated by a splendid Tissot entitled `L'Orpheline (Orphans)', all vivid pattern-making and dramatic light, flanked by excellent Atkinson Grimshaws, autumn tints contrasting atmospherically with bluey-green night scenes. This room, rather different from the PRB but with an equal intensity, is hung with a whole slew of smaller. bright Tissots, 'The Captain and the Mate' being particularly fine. And there's a very odd Grimshaw, called 'Lights on the Mersey' (he came from Leeds), which is actually rather beautiful.

In Gallery VI, the juxtaposition of that remarkably boneless but bravura portrait by Boldoni (of the Marchesa Luisa Casati) and Antonio Frilli's white marble reclining nude is inspired. Surrounded by a quorum of Albert Moores and Alma-Tademas, this is one of the better rooms. Look, for instance, at the impressive luminous greens in Moore's 'Lightning and Light'. The exhibition rather peters out after that, into sentimental genre scenes with overdone facial expressions, and peculiar additions to a Victorian collection — a Canaletto view and Reynolds's vast portrait of the Prince of Wales before he became George IV. What are they doing here? Totally out of place. But it's not quite as bad as hanging a single Blue Period Picasso amid seven Munnings horse paintings. Quite witty really — the arch-traditionalist and past president of the RA would have had apoplexy, particularly as it so thoroughly highlights his own inadequacies.

To collect Stanley Spencer if you love the PRB is, on the other hand, logical. They both share a sort of dotty all-inclusiveness which is utterly beguiling — at least in small doses. Andrew Lloyd Webber owns half-a-dozen Spencers, including a powerful self-portrait and a 'Resurrection', as well as a clinch on the tiger rug.

The trouble with showcasing an individual's collection is that the museum or institution is usually compelled to show everything, rather than make a selection of the hest, This exhibition would have benefited from judicious pruning. I'd never realised quite how bad Waterhouse was, for instance. But there are very fine things, too, such as Millais's late landscape, 'Chill October', a little in the style of Corot or the Impressionists. This exhibition certainly suits the Academy, and it has been extremely well-designed to show off a remarkable collection to its best advantage. The octagon decked out in blue looks particularly fetching.