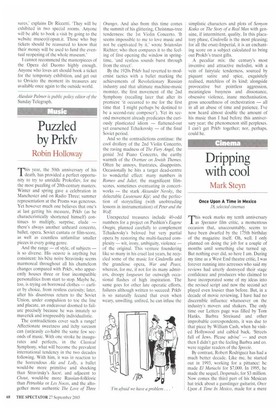 Tyear, the 50th anniversary of his 1 death, has provided a perfect opportunity to try to unriddle Prokofiev, for me the most puzzling of 20th-century masters. Winter and spring gave a celebration in Manchester and on Radio Three; summer representation at the Proms was generous. Yet however much one believes that one's at last getting his measure, Prkfv (as he characteristically shortened himself) continues to multiply, surprise, elude — there's always another unheard concerto, ballet, opera, Soviet cantata or film-score, as well as countless unfamiliar smaller pieces in every going genre.

And the range — of style, of subjects — is so diverse. His oeuvre is anything but consistent: his bete noire Stravinsky seems marmoreal throughout all his chameleon changes compared with Prkfv, who apparently houses three or four incompatible personalities from start to stop. Maybe he, too, is trying on borrowed clothes — earlier by choice, from restless curiosity; later, after his disastrous return to the Soviet Union, under compulsion to toe the line and placate, an endeavour doomed to failure precisely because he was innately so maverick and irrepressibly individualistic.

The contradictions cover such a range! Affectionate sweetness and itchy sarcasm can (un)easily co-habit the same few seconds of music. With one stroke he inaugurates and perfects, in the Classical Symphony, what will become the prevalent international tendency in the two decades following. With him, it was in reaction to the horrendous Ala and Lolly, a ballet would-be more primitive and shocking than Stravinsky's Sacre, and adjacent to Chout, would-be more Russian-folkloric than Petneshka or Les Noces, and the altogether more authentic The Love of Three Oranges. And also from this time comes the summit of his glittering, Christmas-tree tenderness: the 1st Violin Concerto. 'It seems impossible to me to love music and not be captivated by it,' wrote Sviatoslav Richter; who then compares it to the feeling of first opening the window in springtime, `and restless sounds burst through from the street'.

By the 1920s Prkfv had reverted to modernist tactics with a ballet marking the achievements of Revolutionary Russian industry and that ultimate machine-music monster, the first movement of the 2nd Symphony (recalling later that after its premiere 'it occurred to me for the first time that I might perhaps be destined to be a second-rate composer'). Yet its second movement already predicates the curiously plasticated idiom — flattened-out yet coarsened Tchaikovsky — of the final Soviet period.

And so the contradictions continue: the cool drollery of the 2nd Violin Concerto, the raving madness of The Fiery Angel, the genial 3rd Piano Concerto, the earthy warmth of the Overture on Jewish Themes. Often he annoys, frustrates, disappoints. Occasionally he hits a target dead-centre to wonderful effect: many numbers in Romeo and Juliet; the magnificent filmscores, sometimes eventuating in concertworks — the stark Alexander Nevsky, the delectable Lieutenant ICije; and the perfection of storytelling (with unobtruding lessons in instrumentation) of Peter and the Wolf Unexpected treasures include 40-odd numbers for a project on Pushkin's Eugene Onegin, planned carefully to complement Tchaikovslcy's beloved but very partial opera by restoring the multi-faceted complexity — wit, irony, ambiguity, violence — of the original. This venture foundering like so many in his cruel last years, he recycled some of the music for Cinderella and the grandiose opera, War and Peace, wherein, for me, if not for its many admirers, droopy longueurs far outweigh occasional flashes of high inspiration. The same goes for other late operatic efforts, failures although written to succeed: Prkfv is so naturally fecund that even when weary, unwilling, unfired, he can infuse the simplistic characters and plots of Semyon Kotico or The Story, of a Real Man with genuine, if intermittent, quality. In this placatory phase, Cinderella is the most pleasing; for all the ersatz-Imperial, it is an enchanting score on a subject calculated to bring out Prokfv's truest gifts.

A peculiar mix: the century's most inventive and attractive melodist, with a vein of fairytale tenderness, sourced by piquant satire and spice, exquisitely realised, matchless of its kind; alongside provocative but pointless aggression, meaningless busyness and dissonance, obsessive violence, inane mechanisation, gross uncouthness of orchestration — all in all an abuse of time and patience. I've now heard almost double the amount of his music than I had before this anniversary year; the phenomenon still perplexes. I can't get Prkfv together; nor, perhaps, could he.