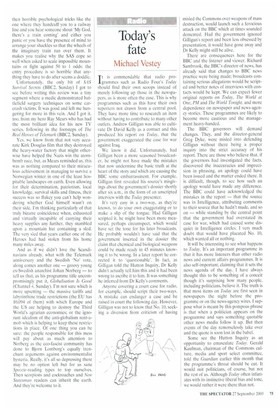 It is commendable that radio programmes such as Radio Four's Today should find their own scoops instead of merely following up those in the newspapers, as is more often the case. This is why programmes such as this have their own reporters not drawn from a central pool. They have more time to research an item without having to contribute to many other outlets. Andrew Gilligan was able to cultivate Dr David Kelly as a contact and this produced his report on Today, that the government exaggerated the case for war against Iraq.

We know it did. Unfortunately, had Gilligan been a more seasoned broadcaster, he might not have made the mistakes that now undermine the basic truth at the heart of the story and which are causing the BBC some embarrassment. For example, Gilligan first revealed his source's misgivings about the government's dossier shortly after six a.m., in the form of an unscripted interview with the Today presenter.

It's very easy in a two-way, as they're known, to do your own exaggerating or to make a slip of the tongue. Had Gilligan scripted it. he might have been more measured. perhaps circumspect, which would have set the tone for his later broadcasts. He probably wouldn't have said that the government inserted in the dossier the claim that chemical and biological weapons could be made ready in 45 minutes knowing it to be wrong. In a later report he corrected it to 'questionable'. In fact, as Gilligan told the Hutton Inquiry, Dr Kelly didn't actually tell him this and it had been wrong to ascribe it to him. It was something he inferred from Dr Kelly's comments.

Anyone covering a court case for radio, for example, should script their two-ways. A mistake can endanger a case and be raised in court the following day. However, Gilligan was not to know that No. 10, seeking a diversion from criticism of having misled the Commons over weapons of mass destruction, would launch such a ferocious attack on the BBC which at times sounded demented. Had the government ignored Gilligan's report and been less obsessed by presentation, it would have gone away and Dr Kelly might still be alive.

There are consequences here for the BBC and the listener and viewer. Richard Sambrook. the BBC's director of news, has already said that changes to BBC news practice were being made; broadcasts containing serious allegations would be scripted and better notes of interviews with contacts would be kept. We can expect fewer original reports on Today. The World at One, PM and The World Tonight, and more dependence on newspaper and news-agency stories. These programmes are likely to become more cautious and the management heavy-handed.

The BBC governors will demand changes. They, and the director-general Greg Dyke, were misled into defending Gilligan without there being a proper inquiry into the strict accuracy of his report. There are those who believe that, if the governors had investigated the facts, discovered the inaccuracies and imprecision in phrasing, an apology could have been issued and the matter ended there. It is difficult, though, to see how such an apology would have made any difference. The BBC could have acknowledged the mistakes in the report — that the source was in Intelligence, attributing comments to their source that he hadn't made, and so on — while standing by the central point that the government had overstated its case for war, which had caused some disquiet in Intelligence circles. I very much doubt that would have placated No. 10, which wanted all or nothing.

It will be interesting to see what happens to Today. It's an important programme in that it has more listeners than other radio news and current affairs programmes. It is also self-important, claiming that it sets the news agenda of the day. I have always thought this to be something of a conceit though it's surprising how many people, including politicians, believe it. The truth is that most items on Today are first seen in newspapers the night before the programme or on the news-agency wires. I suppose what is meant by this pompous phrase is that when a politician appears on the programme and says something quotable other news media follow it up. But then events of the day remorselessly take over and the quote is soon lost in the babel.

Some see the Hutton Inquiry as an opportunity to emasculate Today. Gerald Kaufman, chairman of the Commons culture, media and sport select committee, told the Guardian earlier this month that the programme's throat should be cut. It would suit politicians, of course, but not the rest of us. Although Today often infuriates with its instinctive liberal bias and tone, we would rather it were there than not.